Riderz, can you imagine the situation if there were no brakes equipped with your bike! Wow what a crash!! Umhmm, it is not possible to be a bike without any braking system. Braking system is the essential part of bike like all type of vehicles.

Very recently I have faced some extreme miserable situation due to braking system of my motorbike. Therefore here I am motivated to write something about motorbike braking system. So here is Braking System & Tips For Safety. So let's head into the discussion of the topic. 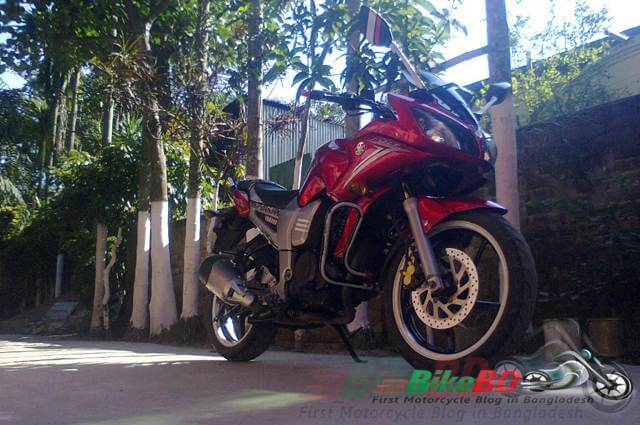 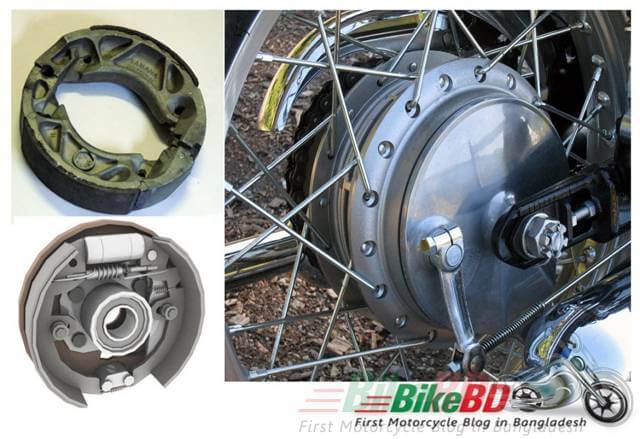 This is the oldest but reliable & effective braking system till now. Still we can see this type of brakes on heavy vehicles and also in many motorbikes.

This is a simple technology where the brake pads or are installed inside the drum of the bike wheel (Rim). When the brake pedal pressed the to hold tightly on the inner wall of the whirling drum and reduces the rotating speed. Thus it works. 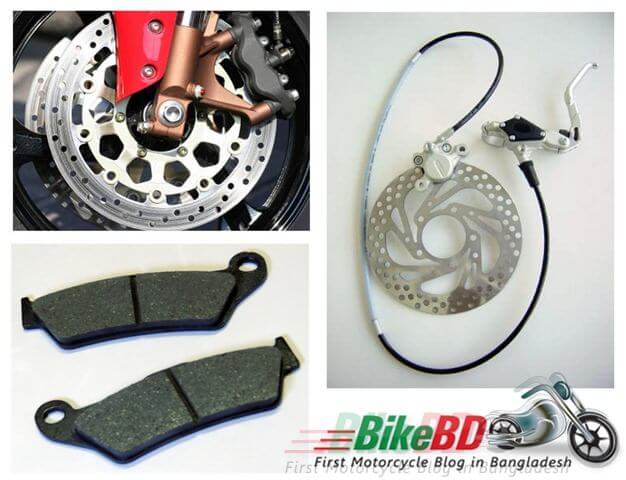 This is the modern braking system of motorbike which has attached first time with motorbike on 1969 by Honda (Source). Then it was used only in racing bikes.

But now it is very common in any type of bikes. In this type of brake a braking disk attached with the wheel instead of the traditional drum, where the clipper assembled with brake pads () from two side & disk stays in-between the pads.

Also Read: How To Maintain A Motorcycle Helmet? Do It Your Own

When wheel rotates the disk also rotates. So when brake lever pushed, the lever presses a cylinder full of fluids and that fluid makes a hydraulic pressure on the pads assembled with the clipper and holds tightly the rotating disk.

Due to usage of fluid (Hydraulic) pressure it commonly also called as hydraulic brake. But it is a misconception. Drum type brake also can be hydraulic when it operated with fluid pressure rather than mechanical pressure. So it will nice to use the term Disk type brake & Drum type brake.

As the disk brake is now most common and popular technology for effective braking system so it has modernized for more safety with ABS, CBS and combined ABS. So let's head into the terms.

ABS stands for Antilock Braking System. The modern bike usage much powerful engines. So they are powerful & faster than earlier generation bikes. So they need more effective braking system and disk type of brake is the proper solution for these bikes.

But there also risk remains for faster bikes. Disk brakes often get jam when it applied hard in extreme situation and can totally lock up the wheel. Thus the bike can easily loose tire traction with the and can slip & skid away very badly.

For this reason, some electronic sensors are equipped with the disk brake to measure the wheel speed & braking pressure applied by brake.

And an ECU (Electronic Control Unit) controls the fluid pressure on the brake pad & lets the brake stop the wheel within a safe calculative range.

Thus it prevents the brake & wheel from jamming in extreme speed situation and prevents the tire from slipping or skidding on . This is the basic term of ABS.

CBS stands for Combined Braking System. This is the most advanced braking system which applied only on higher capacity performer bikes.

The basic principal is to distribute the braking pressure rationally on both wheel of motorbike even any single brake (front or rear) has applied. In this technology ECU (Electronic control unit) controls whole braking system of the motorbike simultaneously.

Braking System - Which is Safe

But due to superior stopping power disk brake is also dangerous than the drum brake as it can easily get jam & lock the wheel in extreme speedy situation. Thus the bike & rider can dangerously slip & skid on the .

So we need more effective technology to avoid such drawback. So ABS is the best solution for this issue, which prevents brake locking, reduces the speed gradually and stops the bike within a mathematical range.

Thus a bike & biker gets relief from slipping & skidding due to brake jamming & locking. So disk type brake with ABS is the safer braking technology. And the safest technology is CBS & Combined ABS.

Motorbike is the most popular vehicle in the world. It's the sign of freedom. But it is very much dangerous rather than other vehicles. So internationally many researchers, surveyors researched on increasing safety issue for motorbike.

And considering effectiveness of ABS EU Commission has passed a law in 2012 to equip ABS with motorbike above 125 cc, which will be mandatory from 1st January, 2016 onward.

In Bangladesh we just started to use disk type brakes in our bikes with regular drum brake. As there is a ridiculous CC restriction on bike engine capacity in our country, so we cannot use higher capacity performer bikes.

For that reason we can only use below 155cc capacity bikes in our country with extreme high cost. And we have no opportunity to get this segment bike equipped with ABS brakes, which might cost us huge money.

And still there are no ABS equipped legal bike in our country. So it is really alarming that we still cannot use ABS, and ABS is out of our affordable range due to government policy.

Braking System - What can we do

As we are not privileged for the utility of ABS technology, we have to be habituate with what we are getting. Generally our lower capacity bikes are fitted with drum-type brakes. So we have to use those bikes with keen caution. And ride with recommended speed limit. And keep us abstaining from extreme use of such bikes.

So here another question arises which is better, disk brake on both wheel, either disk brake in front & drum brake in rear? From the research it found both setup gives near to equal performance.

So you can find front brake always more efficient than the rear one, even rear one is equipped with disk brake. Here rear disk or drum performs near about same but disk brake is better to maintain.

After the braking system the rider also has a vital to do more for safe braking & ensure safety. So let's mach with your experience.

So riderz, that's not the end. Experience cannot be figured by letters. So gather experience as much as possible. Motorbike is the dangerous but most attractive vehicle in the world no doubt.

So keep gathering experience for safety. Ride safe, keep safe and stay safe. Wish to see you with bellow massage box. Thanks.

Ans: In panic braking situation, CBS may not help because there is still a chance that your wheel gets locked and you may fell down, so the ABS is a good option here.

Ans: ABS is not really a requirement for any bike, but it is a nice feature.

Ans: Is it possible to drift a equipped with ABS? YES, because the most common idea of the word “drifting” as it applies to motorcycles does not involve the brakes.