HONDA CB Hornet 160R was first launched in December, 2015 in India. In Bangladesh, the launch date WAS February 16, 2018. Motor heads of the country received this bike with a great joy at the launch of this new bike.

Key Features of HONDA CB Hornet 160R CBS is in its name. CBS (Combi Brake System). This system is exclusively available in this bike only in its class in Bangladesh. New colors of this bike were also launched. Currently, the Honda hornet colors in Bangladesh are:

This bike has a muscular stance aided by wide tires and a big muffler all of which increases the presence of the bike. The X- shaped taillight is also a charm to look at.  The beautiful decals leaves a trace on the onlookers’ minds even long after you whizzed past them.

The all new HONDA CB Hornet 160R CBS is a stunningly good performing motorcycle. Thanks to its diamond frame, it ensures proper handling dynamics while riding. The wheelbase is 1346mm on which the 140 kg bike stands. The is balanced so well that it is very agile yet stable.

The bike has a 12 litre fuel tank which feeds the engine and according to the normal fuel consumption rate, is enough to take you from Dinajpur to Cox’s Bazar at a full load and still leave you with enough fuel to roam about in the towns. The overall length of HONDA CB Hornet 160R is 2041mm while the width and height are 783mm and 1067mm. The ground clearance is 164mm.

The HONDA CB Hornet 160R is targeted to the youth yet it is also very much usable by the older generation too. City riding is a breeze in this motorcycle. College and university students and young job holders are the main customers of this motorcycle. Many middle aged users use this bike daily for their need of commuting and inter-city riding.

The motorcycle is also very good at cornering and it easily allows the user to do inter-city commutes thanks to its comfortable seating arrangement for both the rider and the pillion. So, young family persons would be thankful to HONDA for thinking about their needs of love & care.

You can see the full Honda hornet 160r review by BikeBD here.

The main competitors of HONDA CB Hornet 160R CBS are the likes of:

The competitors are having a tough fight from HONDA CB Hornet 160R CBS for their price as none of them have any feature quite like the CBS.

Although Having a DC Electrical system would’ve added much to its sleeve. You can compare Honda hornet 160r price with the competitors here, Upcoming/Unlaunched variants:  Rumors are there that HONDA will soon launch the HONDA CB Hornet 160R ABS version in Bangladesh. Let’s hope for the best 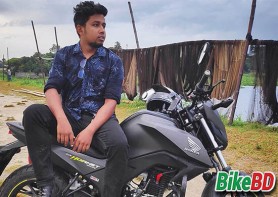 1. What is the gear shift pattern of HONDA CB Hornet 160R CBS?

Ans. HONDA CB Hornet 160R CBS has a 5 speed transmission which is arranged in an international pattern and operated by a  toe-shifter. The pattern is: 1-N-2-3-4-5

3. How frequently do I have to change the battery fluid?

Ans. Don’t worry. You won’t have to think about this at all. HONDA CB Hornet 160R CBS has a Maintenance Free (MF) Battery. So, just enjoy your rides and be concerned about road safety and not your bike’s battery fluid.

Ans. Yes. The HONDA CB Hornet 160R CBS boasts of wide rear tyres, dependable suspension arrangement, comfortable seating and on top of all of these has a good mileage on the highways… So, it is very much capable of taking to long rides on the highways. We have done test rides of this motorcycle thoroughly and found that it is very capable.

Ans. In Combi Brake System (CBS), when the rear brake is engaged by the foot pedal, both the front and rear brakes are engaged simultaneously at a specified ratio of pressure. This pressure is determined by an equalizer. CBS helps to increase the braking efficiency of the bike and hence reduces the braking distance of the motorcycle in a noticeable amount. You can see the cbs in action in our review of honda cb hornet here.