The Chinese branded motorcycles are covering a wider space in the motorcycle market of Bangladesh. Their market coverage expanding chronologically. Therefore, with attractive and promising features Chinese bikes are making huge craze among young enthusiasts. Hence in sequence, here we placed Taro-GP1 VS KPR165 VS Keeway-RKR165 Feature Comparison Review.

The term Chinese Motorcycle once somewhat was an issue of ignorance or winkling maybe still now to some people. But the truth is that, what you pay that you get from the Chinese manufacturers. The present scenario is the Chinese branded motorcycles are competing hard side-by-side with other ruling brands. Even sometimes they are taking advantage of being featured within the budget.

Whatsoever, here we picked three motorcycles from the current motorcycle market of Bangladesh. These models are making huge noise and enthusiasm with their sports profile and promising features. Hence, the Taro-GP1 Special Edition, Lifan KPR165, and newly launched Keeway RKR165 came in this row of discussion. 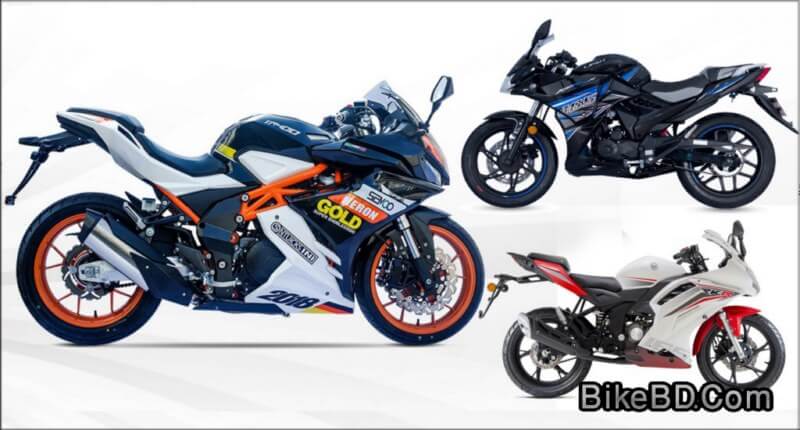 Here the Taro-GP1 is the boldest figure with too much bulky exterior. It holding a giant like exterior that directly picked from its bigger Valentino 400cc model. Hence, with dynamic double-pit projection headlamp assembly, larger windshield, wider cockpit, clip-on handlebar, bigger fuel tank, split-seat, fat-barrel exhaust, and wider wheels its really a fat boy in this row.

Thirdly, the Keeway RKR165 is quite a newcomer in our market. The motorcycle designed sporty with fully-faired aerodynamic body panel and exterior design. With the FOX-EYE double-pit headlamp, wider wind-shield, analog-digital combo-ODO, clip-on handlebar, bigger fuel tank, split-seat, and bikini tail end it's designed as a sportbike. Hence its nicely crafted design gabbed the market attention within a short time.

In the frame, wheel, brake and suspension system, all the bikes here holding versatile features. The Taro-GP1 frame hired from its bigger 400cc Valentino model. It’s a steel truss frame. The Lifan KPR165 holding the same steel frame that featured in the KPR150 model. And the new Keeway RKR165 designed on an Arch Bar Truck Frame.

In this segment Taro-GP VS KPR165 VS Keeway-RKR165 comes in hard competition. The riding, handling and controlling are the vital features for a bike. Here a few interesting characteristics are visible on those bikes which may make a huge difference in the controlling of the bikes.

Commonly, here all the motorcycles featured with aerodynamic body profile and exterior. Further, sporty clip-on handlebar, bigger fuel tank and split seating arrangement adopted on those bikes. But obviously their handlebar setting, seating position, height, and weight are not the same. Further, the overall body dimension is another vital issue of controlling in different road and traffic situations.

Here, Taro-GP1 is literally a fat boy with a bigger body dimension, wider steering radios, aggressive seat & handlebar position. So, it’s comparatively a tough bike to handle in the tight city traffic. But with aerodynamic exterior, fatter tires, improved braking and suspension systems, it can give better advancement riding on highways.

On the counter Lifan KPR165 holding sleek shark-like design and ergonomics. This impression also reflected on its exterior including a very common wheel, brake, and suspension setup. Hence, its handlebar and seating positions are not that much aggressive. So, it gets quite a similar advancement both in city and highway rides. But wider steering radios may make some of the riders busy in city traffic.

Thirdly, the Keeway RKR165 holding a sportbike profile in its all the features. But very technically riding aggressiveness quite minimized with its seat and handlebar setup. The rider seat is quite narrower at the front with a comparatively lower height. Furthermore, the handlebar is mounted quite in a higher position. Hence altogether, Keeway-RKR165 gives a sporty-upright riding and handling characteristics that help for comfortable city & highway rides.

In the engine and performance features, all the three models here holding single-cylinder, four-stroke, liquid-cooled engines. Here the Taro-GP1 hired its engine from Lifan. It’s the NBF1 engine of Lifan that Taro specifies as a 155cc engine. On the counter, KPR165 and Keeway RKR165 holding 165cc capacity engines. In other features both Taro-GP1 and KPR165 engine featured with 2-valve, and RKR165 engines featured with 4-valve systems.

Here the Taro-GP1 engine featured with a conventional carburetor fuel feeding system. The Lifan KPR165 is impressively available both in carburetor and electronic fuel injection systems. And the Keeway RKR165 featured only with an electronic fuel injection system. Meanwhile, all the bikes here featured with 6-speed gear transmission and electric start systems. Hence the conventional kicker system is absent here.

Hence you can see all the bikes here are featured for quite unmatched figures of power and torque. Further, the fuel economy figure also may differ a lot, as the bikes holding different engine tweaking. Moreover, the different body dimensions and aerodynamic features also have a huge impact on the performance and fuel economy. That’s it.

So, readers, that’s quite the brief of the Taro-GP1 VS KPR165 VS Keeway-RKR165 Feature Comparison Review. Here, we tried to figure out the core features. Therefore, figured the similarity and dissimilarities of the bikes to give you a comparative view. Further, when you are interested in a specific model please go through our feature reviews. Thus, get more detailed knowledge of each bike. Thanks.