Most renowned branded sport bikes are expensive. Thinking about buying about those sport bikes is equal to thinking about selling a kidney, or maybe both. But then came the Chinese bikes. Lifan, Keeway, Haojue, Loncin, and many more.

Keeway is a Chinese motorcycle manufacturer that reaches the Bangladeshi consumer through Aftab Automobiles Limited. Keeway has been operating in Bangladesh for quite a while.

The Keeway RKR 165 was initially introduced at the 5th Dhaka Bike Show. It has since then caused extreme anticipation among bikers. And we got to test ride the bike this year. And this is our review of the bike.

The bike comes fully faired and sports graphics. Although looking at the graphics will remind you of other Keeway RK series bikes, the graphics are fairly similar. But the bike has edgy graphics and looks less aggressive and more soothing.

The Keeway RKR 165 comes with clip-on handlebars. Although most clip-ons result in back and wrist pain for maximum riders. But these clip-ons come with handlebar risers.

Hence, the bike may not be as comfortable as a commuter bike, and may not be as aggressive as a crotch-rocket, but floats among both worlds. This means that you can take this bike out for an occasional spin out of the Dhaka City, commute inside the City and also show off your sporty bike in front of your friends.

The Keeway RKR 165 also comes with a dual headlight set up (one for low beam and one for high beam). Although both the headlights are sadly old-school halogen lights and not LEDs, they are very bright. The lights were tested on a highway and the results were satisfactory, which means the lights were just right for the highway and the city.

The Keeway RKR 165 was not inspired by any other bike, rather it was built from the ground up. And that is why the bike comes in three colors:

The Keeway RKR 165 is a tall bike. It has a seat height of 770 mm and a ground clearance of 160 mm. It is evident that for a short rider, it will be difficult to ride the bike. The bike is also noticeably wide. It has a width of 740 mm, which outcomes to not being able to squeeze through traffic.

The Keeway RKR 165 comes with a regular wet multi-plate clutch. The test ride has revealed that the transmission, as in the gear shifting, of the bike, is rather stiff and uncomfortable. The clutch of the bike was a bit hard as well.

The Keeway RKR 165 has 100/80 and 130/70 section tire for the front and rear respectively. The 130/70 section rear tires combined with the 100/80 front outperform themselves during high-speed cornering.

In short, the Keeway RKR 165 is a fantastic bike. It has its downs, but it has more ups. It checks most boxes for many bike lovers. But should it be your regular commuting or touring bike? That is a question that you have to answer on your own.

It's a good bike in budget 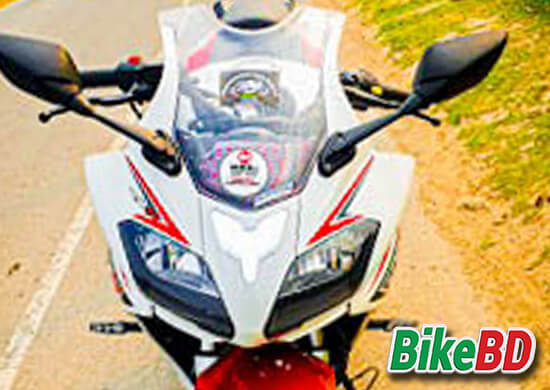 1. Which country is Keeway from?

Ans- Keeway is manufactured in the People’s Republic of China.

Ans- The Keeway RKR 165 does not have any naked version. But Keeway does have multiple 150 cc bikes of different categories.