How Does A Motorcycle Carburetor Work?

How Does A Motorcycle Carburetor Work?

A motorcycle carburetor is a device that blends air and fuel for an internal combustion engine (Source). Carburetors depend upon differences in atmospheric pressure to aid in their task of mixing air with fuel.

Motorbike carburetors are no exception. As an engine piston goes up it frees space inside the cylinder, creating a lower pressure environment.

The higher pressure in the outside air forces air into the carburetor, which will then inject fresh air into the firing chamber to be mixed with gas.

The Carburetor was invented by an Italian, Luigi De Cristoforis in 1876. A carburetor was developed by Enrico Bernardi at the University of Padua in 1882, for his “Motrice Pia”, the first petrol combustion engine (one cylinder, 1,225 cc) prototyped on 5 August 1882. 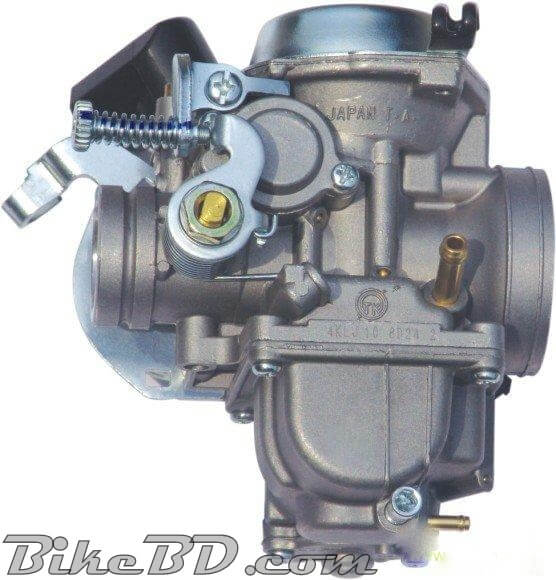 Motorbike carburetors, unlike those in cars, are controlled by the throttle position. Where a car's carburetor will adjust based on engine speed a motorcycle carburetor dependent on a number of different systems to shape air flow into the engine. The system that performs at the highest throttle speeds is called the main jet.

It is essentially an open passage that draws air very quickly in with little bottle-necking. Inserted in the main jet is a jet needle.

As the throttle is brought higher and higher, the jet needle is slowly removed, opening up more and more of the air passage into the carburetor.

The passage is entirely open at full throttle, becoming the main jet. The pilot jet and the slide valve are two separate systems that regulate the airflow through much smaller holes when the motorbike is traveling at lower speeds, typically from idle to quarter throttle.

The Following parts are that of a general motorcycle carburetor. 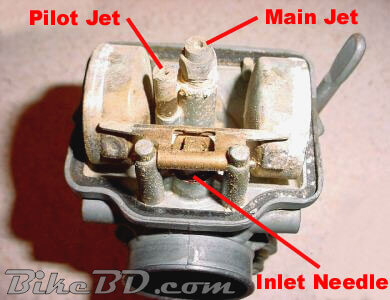 A carburetor is essentially a tube. There is an adjustable plate across the tube called the throttle plate that controls how much air can flow through the tube.

Fuel is gravity feed to the carburetor from the fuel tank. At some point it flows through a filter to remove the micron size contaminates. The carburetor store enough fuel in a bowl to control the supply needed.

The supply is regulated by a needle valve and a float that goes up and down in the fuel. When the level reaches its maximum, the float is designed to close the needle valve, thus stopping any more fuel to enter the bowl. The fuel is sucked from the bowl through jets and venture tubes. Works kind of like sucking on a straw.

A flap in the lower section of the carburetor opens and closes the amount of vacuum the engine pulls into the engine. This is called your throttle and is hooked to the cable on the throttle that is turned manually by hand to control the speed of the bike.

The flap as it is opened allows the straw effect to pull the fuel needed through the jets into the engine. The jets regulate how much fuel to air ratio the engine can handle. The other circuit is the idle control. 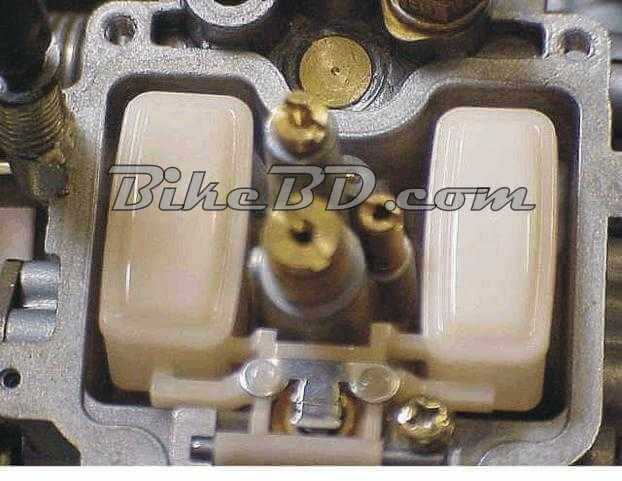 It is regulated by a needle valve that is adjustable, and controls how much air or vacuum the engine pulls at idle. The carburetor has two sets of Jets.

The regulator between the two circuits works by a spring and an check ball. The vacuum for the throttle circuit will come into play only after the tension of the spring is overcome by pressure from the amount of vacuum allowed into the engine by the throttle plate.

1. What does the needle do in a carburetor?

Ans: The jet needle and needle jet hit carburetion from 1/4 throttle 3/4 throttle. The jet needle is a long tapered rod that measures how much fuel can be pulled into the carburetor venturi.

2. Does the main jet affect idle?

3. How many types of carburetors are there?