The Yamaha Motorcycle has unleashed the all-new Version of Yamaha FZS-FI. Therefore the new Version 3.0 comes with lots of updates and enhancements on its exterior and core features. Hence covering the new machine elements here we came with Yamaha FZS-FI V3 Review – Feature and Updates. 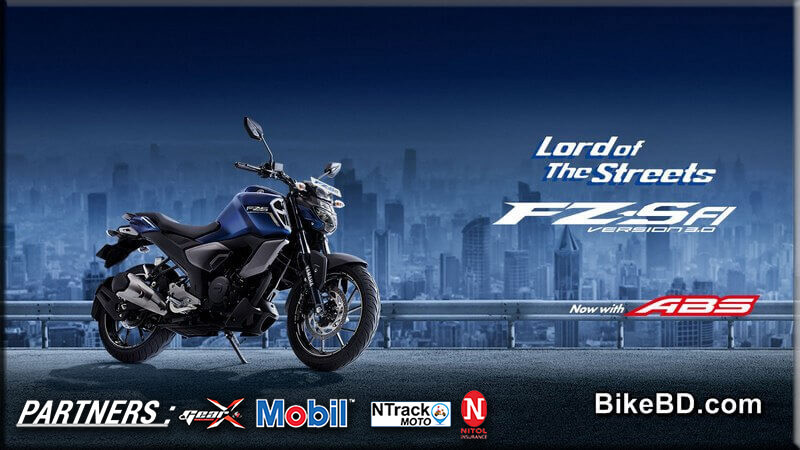 The Yamaha FZS-FI V3 is the third generation mold in the 150cc FZS series. This 150cc range motorcycle was born on 2008 with the badge of FZ16 afterward FZS and Fazer came. The motorcycle primarily marketed in India, Indonesia and in few South American countries. Afterward, it expands its market covering numerous countries in Asia and South America.

The first generation motorcycles were featured with carburetor fuel feeding system and those were 153cc engine. But from the second generation, the motorcycle got different size engine and fuel feeding system. Therefore it equipped with Electronic Fuel Injection System and engine size reduced to 149cc. Hence the latest version has launched this year with a bundle of update and enhancements.

The new Yamaha FZS-FI V3 is completely a brand new machine that clearly visible even from the first sight. Being built on the same chassis with the same engine, wheel and suspension system the motorcycle got a brand new look and attitude. The exterior is totally refreshed and redesigned. Furthermore, it boosted with a more muscular appearance.

Here the ODO LCD is a great attraction that comes with a negative display. It featured with different gauges along with the digital clock and ABS warning lamp. Hence after the wider pipe handlebar, the front is open and naked that’s too aggressive. 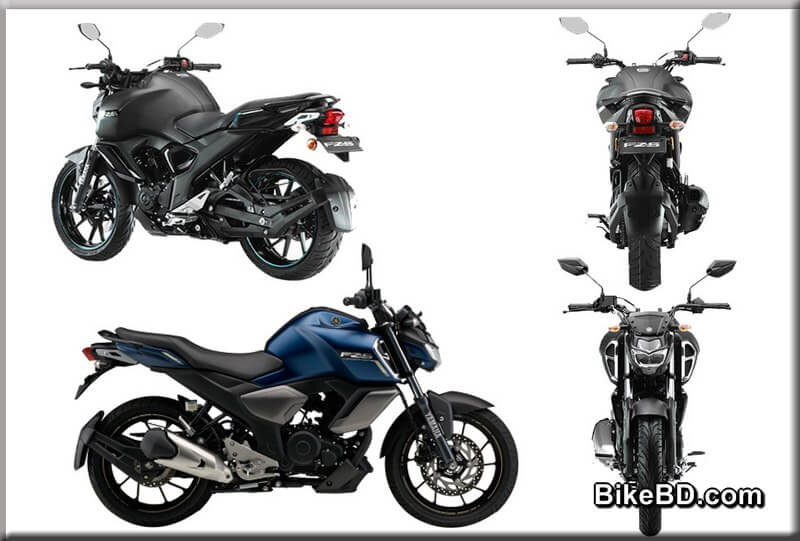 Coming to the second attraction the fuel tank comes with all new design. It’s now excessively muscled that FZS never was before. This 3-part dented and bloated tank muffler comes with huge air-duct. The air ducts are too much exposed as it crafted with chrome linings. Therefore the entire front look of the machine is just exclusively aggressive.

Coming to the rests, its side panel and rear also comes with all new design and appearance. The tail lamp remaining the same as version-2 but the grab rail is the single unit along with one piece seat. Hence the side panels, engine duct all are brand new. But additionally, it comes with new engine cowling, exhaust muffler, and bikini rear wheel fender.

Hence from every corner, it redesigned, refreshed and new machine. Therefore the Version-3 is more exposed, muscular and damn aggressive with the new profile. 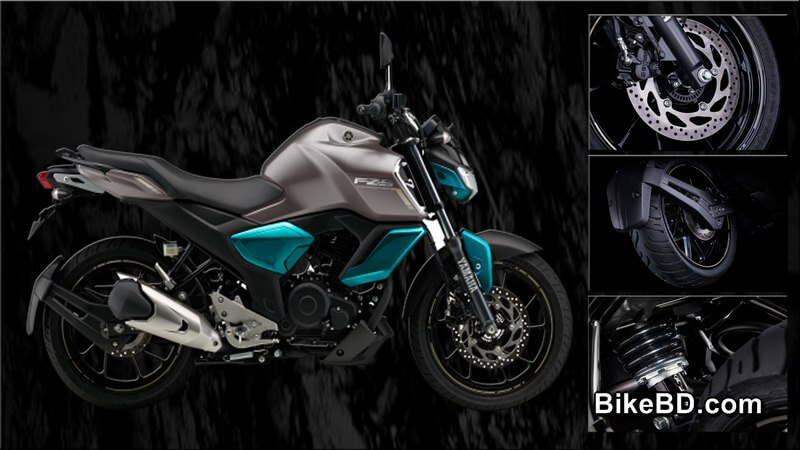 The new Yamaha FZS-FI V3 is quite common with FZS-FI V2 in terms of chassis, wheel, brake, and suspension system. But enhancement comes with its braking system and few adjustments obviously came in dimensions.

Whatsoever, the new machine comes with all alloy rims with wider tubeless type tires. Here wheel rim design comes with few changes in the number of the spokes. Whereas the suspension system also remaining with the same setup. But according to Yamaha, those are tweaked for better control and comfort. Whatever the front suspension is wider barrel telescopic fork type and the rear one is mono.

Coming to the braking system it updated with ABS enhancement in front with the hydraulic disk setup. Here the ABS system is single channel ABS and its non-switchable.  Hence the rear brake remaining the same hydraulic disk braking system and that is standard. Again, not to mention but the rear wheel drum brake option omitted from the new FZS-V3 product line.

You know the Yamaha FZS series is dedicated to superior handling and controlling characteristics. Hence it has the longer and satisfactory previous track result. Therefore the new machine is not out that legacy. So it ensured for better controlling and handling experiences.

Here the seating facility has updated with wider and comfortable seating arrangements. Now the seat is segmented single piece unit that also adjusted with comfortable heights. Hence along with the new design of wider grab rail now it’s more convenient to tackle with 137kg Kerb weights.

Furthermore, the motorcycle comes with ABS setup with its front hydraulic disk braking system. So the controlling characteristics enhanced with the efficient and safer profile. Again the new machine comes with stock sharee-guard, bikini chain cover, and rear wheel fender. Hence obviously those altogether gave a better profile to maintain our local situations.

The engine of the new Yamaha FZS-FI V3 is remaining the same as the older FI Version. It’s the 149cc single cylinder four-stroke air-cooled SOHC engine. The power and torque rating is respectively 13.2PS and 12.8NM which also the same as the older version. But as per Yamaha, it has tweaked with updated settings in the new version.

The new motorcycle engine is now more efficient with its tweaked Blue Core feature. The engine setting is optimized with better fuel injection mapping and ignition timing. Hence it updated for better acceleration and quick initial pickup. Therefore now the bike is more responsive to its throttle. Hence the fun playing and speed overtaking is more tasteful and power playing with new Yamaha FZS-FI V3. To see this bike visit Yamaha Showroom near you. 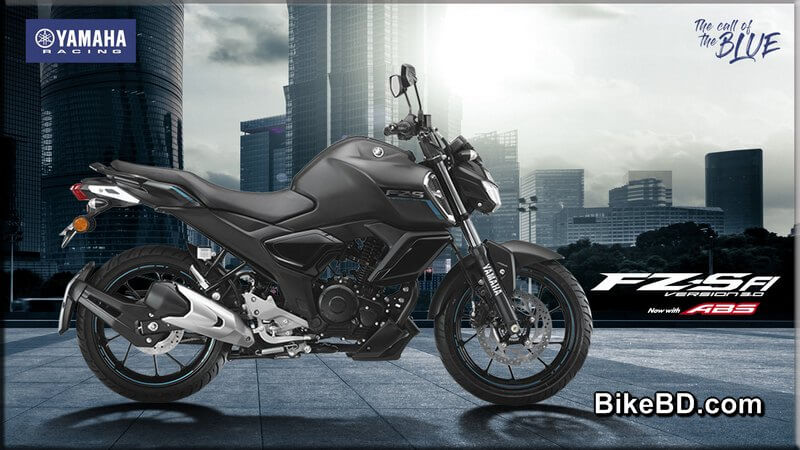 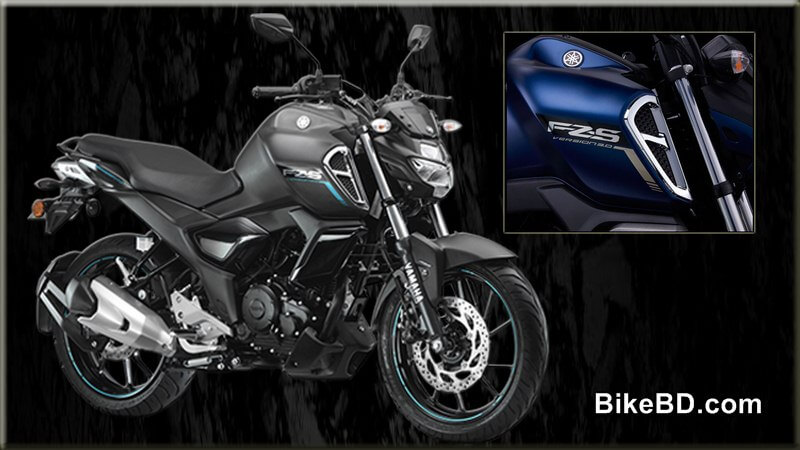 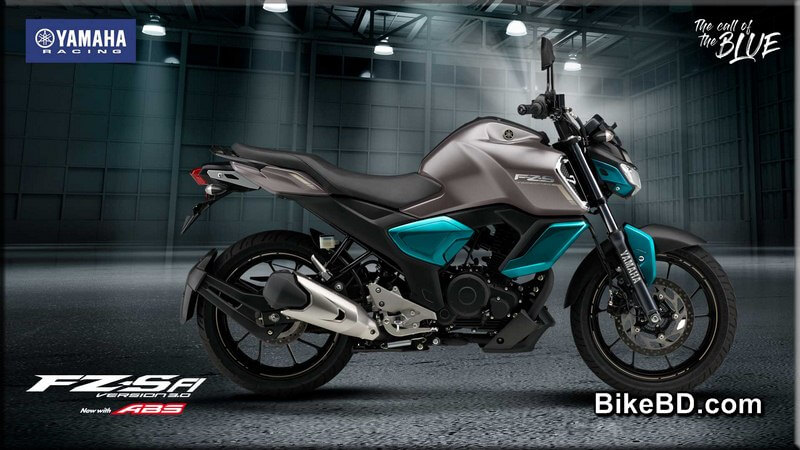 So, guys, this is the overall setup of the new machine. Hope you got the true featured image of the new bike. We hope it will be another ground braking performer as did the predecessors. Hence thanks everyone for being here with our Yamaha FZS-FI V3 Review – Feature and Updates. Therefore stay tuned for our upcoming feeds. Traction Control System (TCS) In Motorcycles And How It Works?