If you are a biker from Bangladesh, you must know the FZ series in Bangladesh and the subcontinent is a favorite. This series set the benchmark on its launch back in the days and all the other manufacturers followed soon. Recently, version 3 of the famous series has been introduced in Bangladesh. The latest bikes from the FZ series are currently sold by ACI Motors Ltd as this YAMAHA FZ-S FI V3.0 with which we are here today. The FZ series now gets a Single Channel ABS too. See fzs v3 price in BD and picture here.

The Yamaha FZSFI V3 is the third generation of the 150cc FZS series. The 150cc range motorcycle was first introduced in 2008 under the FZ16 badge. It is primarily sold in India, Indonesia, and a few South American countries. It expands its market to include many countries in Asia as well as South America.

The first-generation motorcycles featured a carburetor fuel-feeding system. These were 153cc motorbikes. The second-generation motorcycles had different engine sizes and fuel systems. It is now equipped with an Electronic Fuel Injection System, and the engine's size has been reduced to 149cc. The latest version was launched in this year's model year, with many enhancements and updates.

The Yamaha FZSFI V3 is a completely new motorcycle that is easily visible at the first glance. The motorcycle was built on the same chassis as the engine, wheel, suspension system, and engine. It has a new look and attitude. The exterior has been completely redesigned and refreshed. It has a more muscular appearance.

The headlamp assembly, which starts at the front, is a new unit and comes with an ODO consol. All LED lights are equipped with pits to provide high and low beams. It also includes the pilot lamp and a Triple-Pit assembly, which is attached to the naked ODO panel.

The ODO LCD, which is a fantastic attraction, comes with a negative display. You could choose from different gauges, as well as the ABS warning lamp and digital clock. The front, after the pipe handlebar is wider, is naked and aggressive.

The second attraction is the fuel tank. It has a completely new design. FZS is now more muscular than ever before. The huge air duct comes with this 3-part bloated and dented tank muffler. Because it is crafted with chrome lines, the air ducts are exposed too much. The machine's front looks are very aggressive.

The rests have a new design and appearance. Both the rear and side panels are also updated. While the tail lamp remains the same as version-2, the grab rail has a single unit and a one-piece seating. The engine duct, side panels, and muffler are all brand new. It also comes with a brand new engine cowling, exhaust muffler, and bikini rear fender.

It was redesigned and refreshed from every corner. Version-3's new profile makes it more visible, muscular, and aggressive.

Features: Key features of YAMAHA FZ-S FI V3.0 are described in a nutshell below.

The bike features a design that is striking with a strong presence in the streets. Combined with a refined engine and its performance, this bike delivers benchmark-level performance. The styling shows off pure class. The bike has been filled with features useful for the enthusiast bikers in mind. The bike now gets a comfortable single Two-Level seat instead of the former Split-style one.

The shape of the bike allures the rider to climb on and pull the throttle wide open and zing through the traffic. The head and taillight assembly are both renewed and now feature LED on the front. The bike comes with Single Channel ABS (Antilock Braking System) upfront. The instrument panel is replaced with a Negative LCD screen that looks awesome.

The seating is very much comfortable with an upright rider triangle and widened pipe handlebar ideal for commuting. The fuel tank is also very cool to look at with an iconic shape and the minimalistic graphics on the attractive body colors also add up to the cool factor of this bike. There are also wide tires at the ends of the long-wheelbase that build the rider’s confidence. One major difference from the FZ FI V3.0 in this bike is that there is an engine cowl for better mud protection.

There are two colors of the YAMAHA FZ-S FI V3.0 in Bangladesh. All the colors available for this bike are very attractive and they are:

Overall the bike has a distinct stance for standing out in the crowd. And from any angle, you know it’s an FZ-series breed.

Body Dimensions: The YAMAHA FZ-S FI V3.0 is an amazing performance motorcycle. The wheelbase is 1330mm on which the 137 kg bike stands. The bike is balanced very well for its time-tested Diamond frame. The bike has now got a 12.8 L fuel tank which feeds the engine through the Fuel Injection system and is ignited by TCI (Transistor Controlled Ignition) system.

Suspension, Brakes, Wheels: The suspension system of this bike has a set of trusted Telescopic forks up front and a Mono Shock at the rear. The front brake is a 282 mm Disc paired to the 5*2-spoke alloy wheel with 100/80-17 M/C 52P tire. The rear brake is a 220mm Disc attached to the 5*2-spoke alloy wheel that is wrapped in 140/60R-17 M/C 63P tire. Both the wheels have a tubeless tire for better performance and to avoid sudden deflation. The front brake gets a Single Channel Antilock Braking System (ABS) which was first in its class upon launch in Bangladesh.

Best For:  The YAMAHA FZ-S FI V3.0 is targeted at the sporty-minded commuter. The bike is mainly built for commuting and so, the city riding is excellent in this motorcycle. Just the catch is, the turning radius is large and so moving through nooks and corns is a bit tougher than some of the competitors. College and university students and young people are the target customers of this naked city bike. The bike has excellent design language to remind you of its freshness as well as has enough performance to tackle everyday riding needs. You can see YAMAHA FZ-S FI V3.0’s first impression review here by BikeBD.

Competitors:  The main competitors of YAMAHA FZ-S FI V3.0 are the likes of:

The competitors are facing a challenging fight from YAMAHA FZ-S FI V3.0 as it ticks nearly all the boxes at a time questionable by the bikers of this class. But the price is a bit on the higher side of the spectrum. You can compare Yamaha FZ FI v3 price here with the competitors. 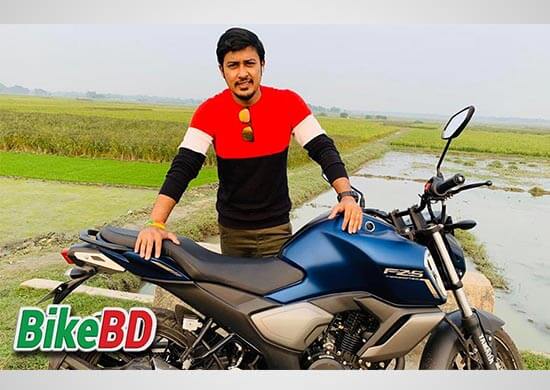 Ans. YAMAHA FZ-S FI V3.0 has a 5-speed manual transmission with wet multiplate clutch which is arranged in a return pattern and operated by a toe shifter. The bike’s gear ratios are a little bit tweaked for better street performance. However, the pattern is: 1-N-2-3-4-5.

Ans. There are no company-claimed mileage of YAMAHA FZ-S FI V3.0. We expect the bike to give around 38-42 kmpL in Dhaka city and more on others.

Ans. The YAMAHA FZ-S FI V3.0 is not intended for highway performance but a streetfighter. The bike is extremely well-balanced and all but the windblasts at highway is all going to get the rider’s body. So, it is not recommended to ride the FZ in the highways. That said, the bike is very capable with the performance and all but there is the YAMAHA FAZER FI V2.0 built precisely for that purpose.

Ans. Yes, there is the YAMAHA FZ FI V3.0 built around the same chassis and engine with some cosmetic changes.

5. Can we install kick in Yamaha FZS V3?

Ans: No FZ S Doesn't Have Kick Lever . But It Has The Option To Install It Later.