Motorcycle Airbag Vest for the Bikers. Don’t you think a motorcycle crash is a nasty bad thing? A crash can damage your beloved motorcycle. No matter that can be restored spending even with bagful cash and make you smile again. But you will agree the physical injury of a rider is never ever a sweet thing.

Sometime it can’t be restored even zeroing any billionaires Swiss Bank balances. Whatsoever, we are here today to discuss on Motorcycle Airbag Safety Vest for the Bikers. This hi-tech and modern safety gear can minimize the impact of a crash. Thereby it can save the rider from a severe injury. 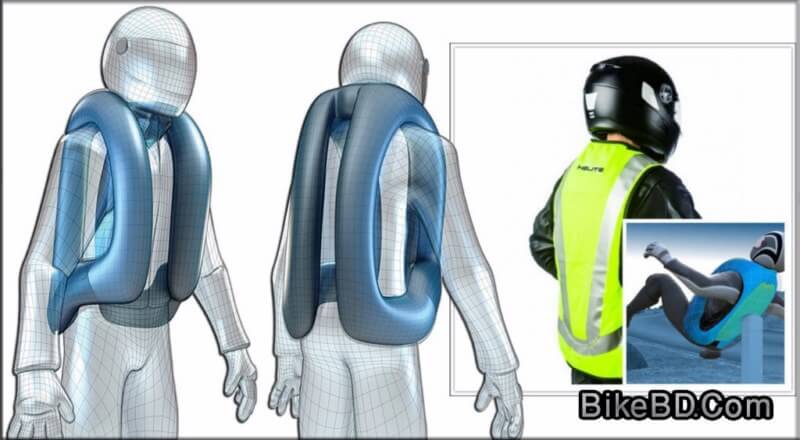 Motorcycle Airbag Vest for the Bikers

You know the airbag security system is quite a common safety enhancement in the car like four-wheelers. In favor, the four-wheelers are holding comparatively safer arrangements like cage-like cockpit, comfort & armored layers, seatbelts, fasteners, etc. Moreover, the modern lifesaving safety package also enhanced with an integrated airbag system mounted in the dash.

Alike the cars or other four-wheelers dash, the concept also adopted in the few motorcycles. Undoubtedly those are bulky in size and luxurious. Hence obviously you will agree that it’s quite impossible to feature the same in every category of motorcycle. Meanwhile, the motorcycle has no cage-like cabin which can hold the rider inside. 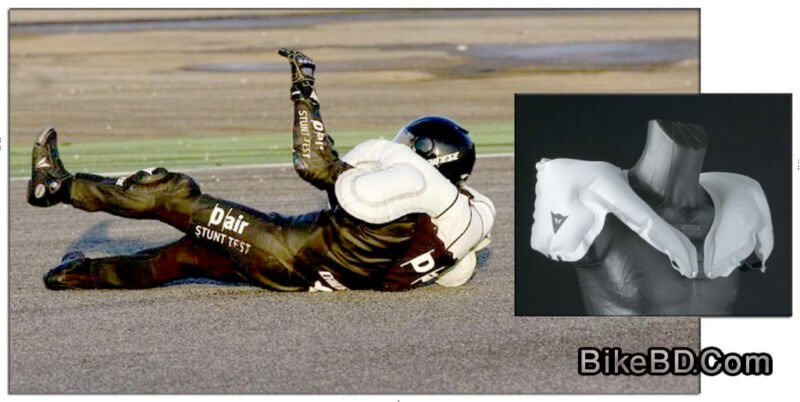 Therefore, it’s more realistic to give the rider safety through the riding gears instead of the tiny motorcycle dash. Hence the concept of airbag vest took the place as it’s more convenient and realistic. Furthermore, modern motorcycle riders wear extensive safety gear where the integrated airbag jackets can work best over the dash.

Here the basic principle and safety feature is the same. The airbag system activates on or just before the crash and makes a cushioned armor around the rider's body. Thus is saves the rider from severe shock or injuries. The technology and feature of airbag vests are now already proven. Resulting, the MotoGP authority officially announced the mandatory use of airbag vests from the 2018 season of MotoGP. 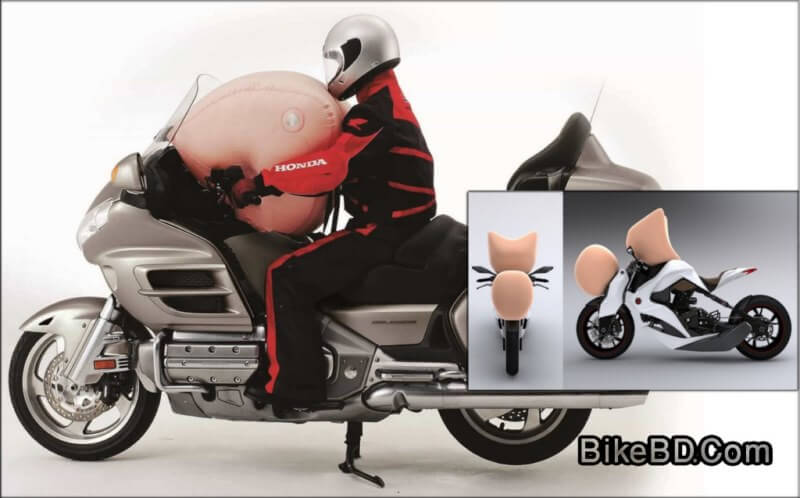 The concept of the airbag protection system for the motorcycle rider or the horse riders was though in 1976. The Hungarian inventor Tamás Straub officially registered it on 30 November 1976 for further development. The limited patent restriction ended in 1980 and it became free to develop the technology by anyone.

After the Japanese, several American and European countries got the patent of the airbag vests. The first commercial airbag vest launched from Europe in 1999. This year the airbag jacket awarded from the World Exhibition of Inventions in Belgium with Gold and Silver Medals. At the same, it also owned a Gold Medal from the Safety Protection Life Saving Division. 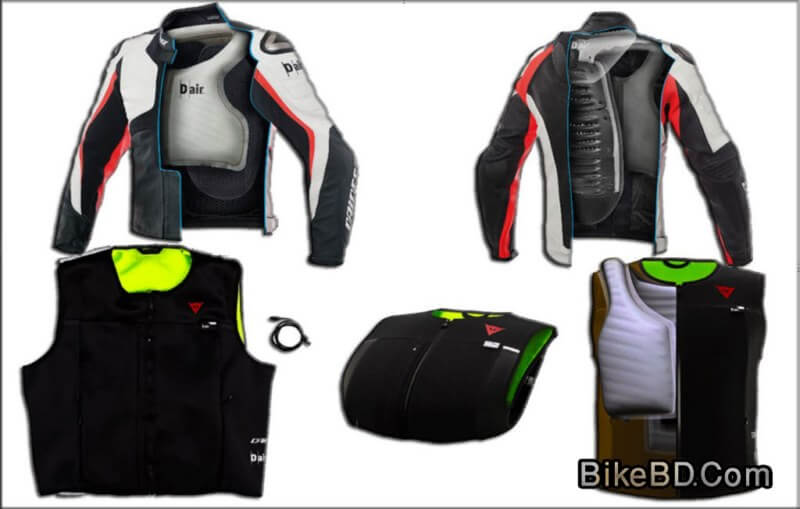 In the meantime, the Italian motor gear manufacturer Dainese developed the core technical solutions of airbag vests. They adopted an electronic system based airbag technology instead of mechanical triggering through physical connections with the motorcycle. In the success of their development, they positively began the sales of motorcycle jackets with the airbag system from 2001.

In this earlier time, the airbag jackets are widely grabbed by the national security department of many countries. Later it successfully entered into the race track. And now it’s officially gone mandatory to the MotoGP riders from the 2018 season.

Presently many other motor-gear manufacturers like Alpinestars, Klim, RST, and others are producing various types of airbag vests and jackets. They are also selling those for the common motorcycle riders along with official track racers worldwide. 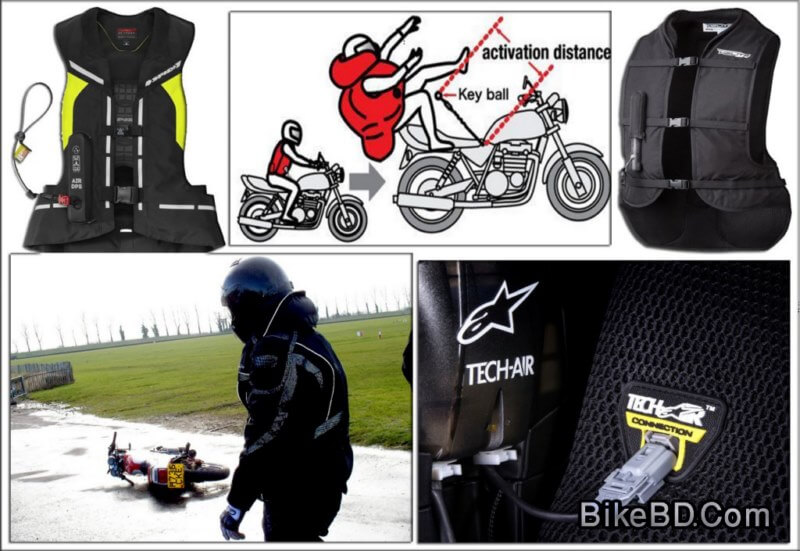 The motorcycle airbag vest is the personal safety gear that the motorcyclists wear likes a regular vest or jackets.  The gear can be wear over regular garments or with the standard padded vests. And some of the airbag systems are integrated inside with the regular riding jackets.

The core function of the airbag or air-bladder is it automatically inflated by the gas released from a compressed gas canister. Thus the inflated airbag around the rider’s neck, chest, and other body parts protect from shock and further injury. Hence the airbag can be reused again installing a new cartridge of gas.

When a crash or further situation occurs, just on the displacement of the rider from the saddle the tether triggers the canister. Thus within milliseconds the airbag gets inflated and makes the cushioned amour around the rider. 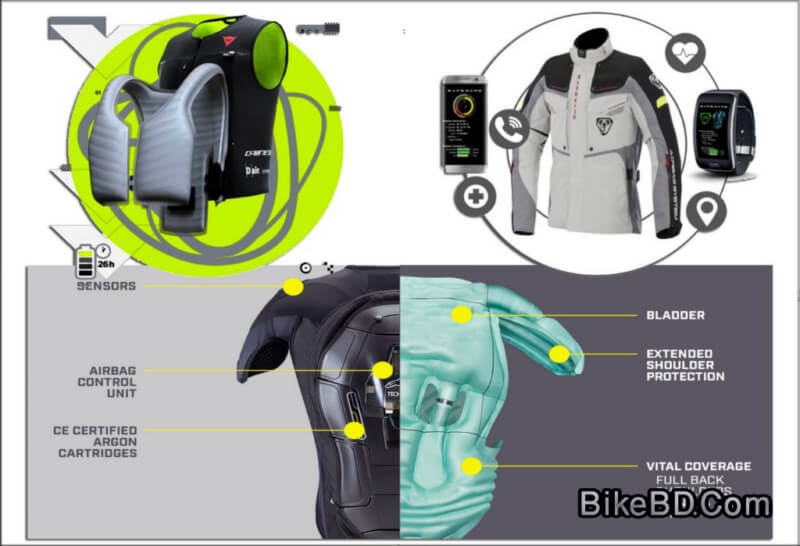 In the electronic system, the airbag-CPU combines advanced software algorithms with various sensors data including accelerometers, GPS-sensors, and gyroscopes. Thus it analyzes various riding conditions and activates the gas triggering within milliseconds just only before a crash. The system is incredibly precise, effective, and proved its eligibility.

Hence the modern airbag system is now the hi-tech and proven security system for the motorcyclists. It widely tested in the various race tracks and saved many riders from injuries in numbers of nasty crashes. Thus it also took place in the common motorcyclists shopping carts.

What is the motorcycle airbag system?

How does a motorcycle airbag vest or jacket work?

Ans: The core function of the airbag or air-bladder is it automatically inflated by the gas released from a compressed gas canister. Thus the inflated airbag around the rider’s neck, chest, and other body parts protect from shock and further injury.

Who developed the modern electronic controlled airbag system for the motorcyclists?

Ans: Italian motor gear manufacturer Dainese developed the core technical solutions of modern airbag vests. They adopted an electronic system based airbag technology instead of mechanical triggering through physical connections with the motorcycle. 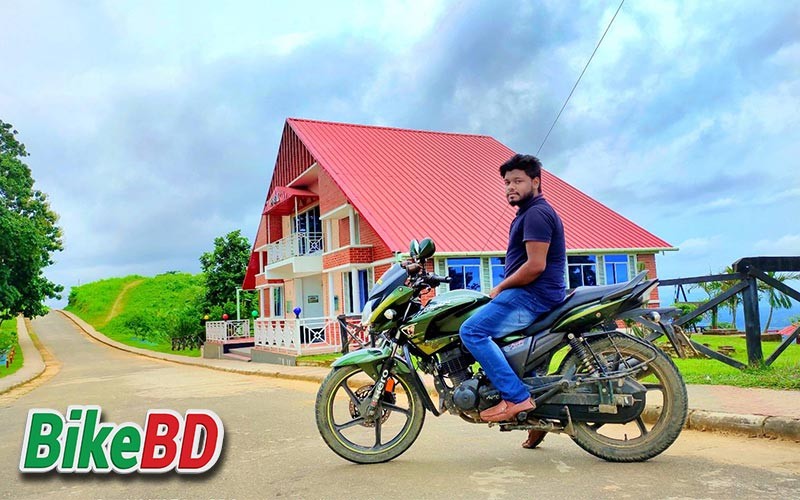