Hero has been one of the most popular brands in Bangladesh. Months back we have TESTED Hero Xtreme and all of us felt that the bike was well equipped and good for people who want a bike for their daily use but we believe that there was an X Factor that was missing in the bike, that same X-factor which separates Hero from all the other brands in the market. So when we were handed a Hero Xtreme Sports for BikeBD test ride, there were lots of questions than answers in front of us. Hence let’s find them out in Hero Xtreme Sports Review by Team BikeBD which is based on 700 km Test Ride. 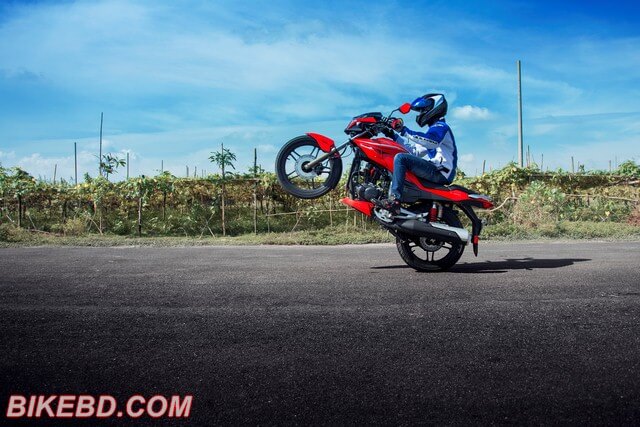 Hero Xtreme Sports was launched in Bangladesh on 9th June of this year, where we BikeBD were officially invited in the launching ceremony by the high officials from Nitol Niloy Group and from Hero Motocorp (India). It was a great launching ceremony and we were happy to be a part of it. In that program the country high officials from Hero told us that they believe that they have designed the Hero Xtreme keeping the philosophy of the Xtreme  brand in mind but targeting the common user with features they would love. They also ensured us that Hero Xtreme Sports will be a completely new bike but not just a change in the name or sticker job. Therefore let us dig out the real Xtreme which uncovered on our track. 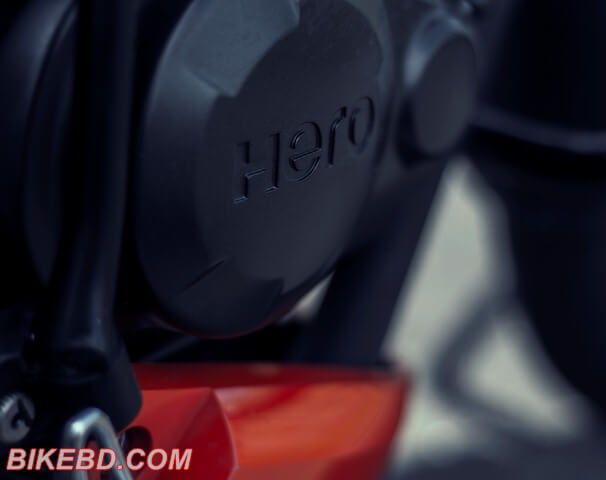 Firstly when you put Hero Xtreme and Hero Xtreme Sports side by side you tend to notice lot of cosmetic or design differences, but what really separates both the bikes is their engine. Both are 150cc air cooled engine but Hero engineers fiddled with the SPORTS engine by increasing the RPM of the bike & by increasing the compression ratio to 10:1 from 9:1 managed to get 1 (ONE) more BHP out of the bike, so now it produces 15.2 BHP (or 15.4 PS) & a 0.7 NM increase in TORQUE. Here we can mention as only the Bajaj Pulsar and Honda CBR150R in the past have increased the power of their bikes which were imported in Bangladesh.

Hero Xtreme Sports is currently the most powerful 150cc in Bangladesh in the air cooled category. 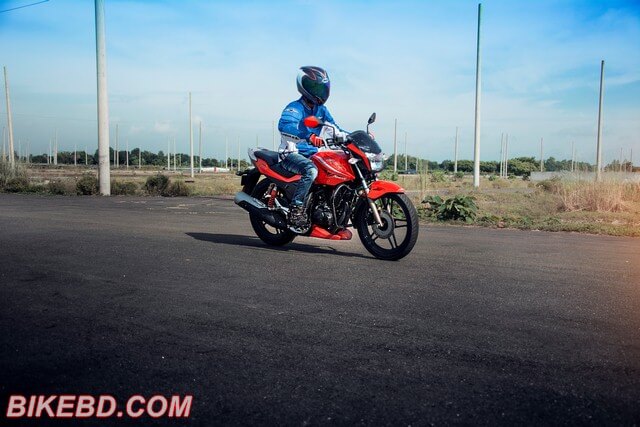 The first aspect you notice about the product is the great looks. But what really makes us fall in LOVE with Hero Xtreme Sports is that you will feel the increased power once you twist the throttle! The engine sits there all day to attack any prey in its path and though the bike was new we could feel that once the bike is warmed up it will put all the bikes in its class on its rear view mirror. You will love the way Hero punch that power out, they didn’t added any extra spark plug or gave holes to many valves whatever comes out of the engine is blue blooded pure power!

The engine is refined but we experienced slight engine vibration which makes the body and handle bar shake at 6000-7000 RPM. We think after the sensitive break-in it can get smoother operation. The transmission is better than before but as our bike was brand new so we struggled a bit in gear changing in the early face but after first servicing it got much better. 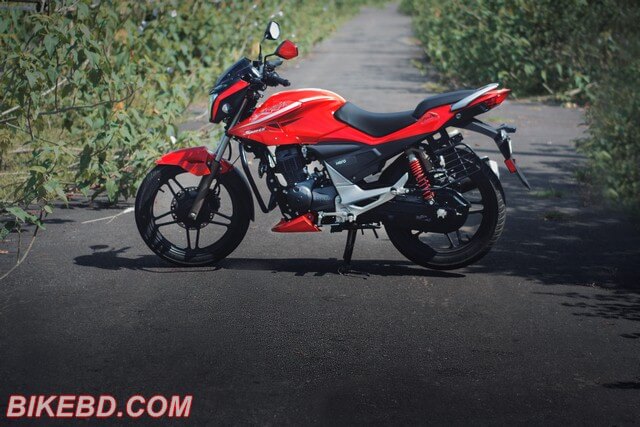 Hero Motocorp promised us that Hero Xtreme Sports won’t be just another bike with name changed but as much as they changed the bike’s engine, they also worked very hard with the styling of the new bike. The bike looks is totally different with a new headlight and to be honest with you it looks awesome during night time and for this we are happy to state that Hero made something that is aggressive. With this new bike they have added split seat and the seat are flat and comfortable to ride with.

Hero also added sporty mud guard in front of the engine of Xtreme Sports. Unlike Hero Xtreme which when you sit seems a bit small because there is nothing around the fuel , in Hero Xtreme Sports  they have added elongated scoop for better aerodynamic and for sharp look. We are happy that they ditched the old Hero Glamour type indicators and fitted new ones which nicely go with the style of the bike. There are different side and rear cowl and overall styling. They changed the exhaust design of the bike to make it sportier. In addition the newly designed rear panel with new design extended rear mud guard and sharp edge tail lamp really increased the sporty appeal. 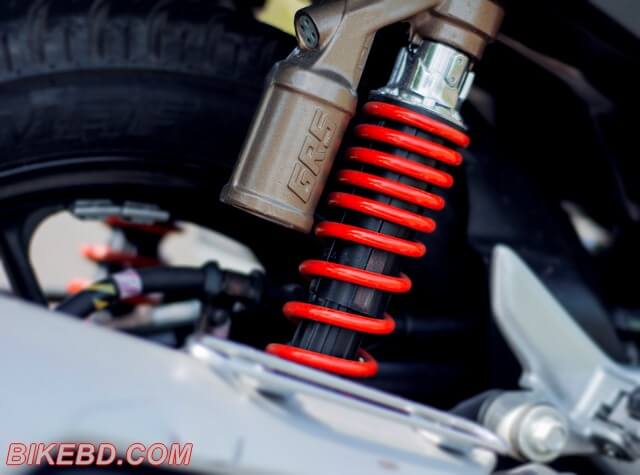 Hero Xtreme Sports is equipped with front telescopic suspensions and the rear has twin gas charged shock absorbers which is 5-step adjustable. We are happy to state that just like previous Hero bikes the suspensions of this bike actually takes the shock from the and don’t transfer it too much to your body. Still we believe because this is a new bike with a tag line SPORTS, Hero could have gone for rear mono suspension and a bit heavier front suspension like FZS and Gixxer as the roads of BD are getting worse day by day. 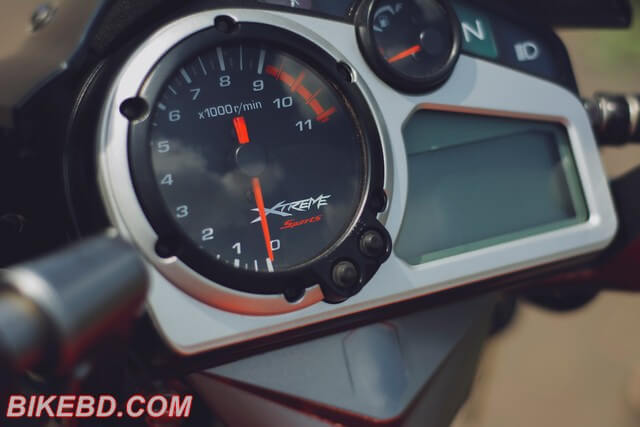 The instrument cluster of Hero Xtreme Sports is a bit disappointing as it is loaned from old CBZ Xtreme, where we would prefer the bike with the same speedometer as did with the Hero Xtreme. The key hole is mounted at the right neck of the bike just below the speedometer which is the biggest disappointment of the style of the new bike. It sits with the right side front indicator and sometimes during night time it is often hard to find the key hole when you are sitting on the bike and ready to start. 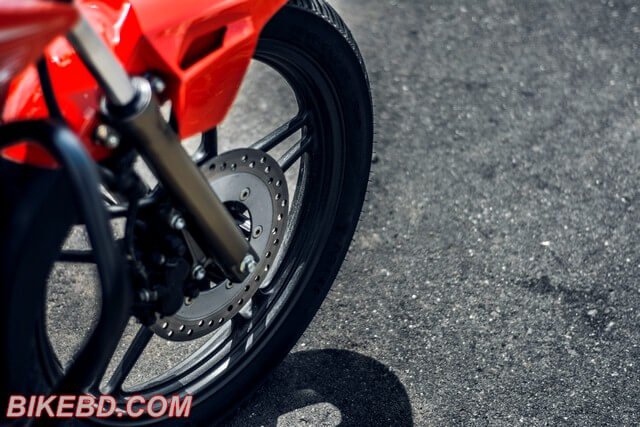 Hero Xtreme Sports don’t have any engine kill switch so when you are before the red light at the traffic you have to switch off the ignition with neck mounted key to save the fuel which is a bit frustrating in real. The speedometer gets blue backlight with analog rev counter and many emergency lights which help to tell you many things and most of all, the side stand indicator for your safety. 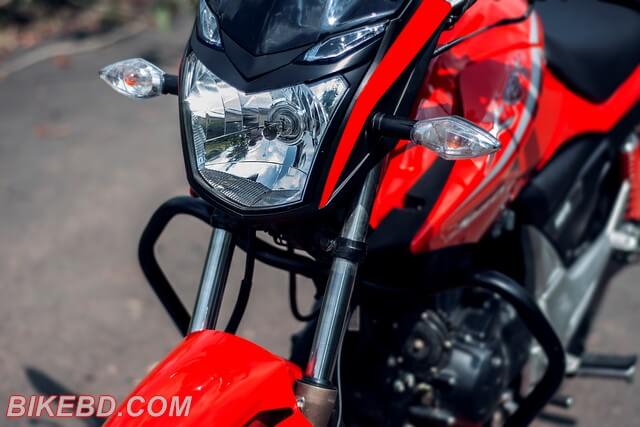 On the other side of the speedometer and on the top of headlight there is lot of gap on the panel which is looking very odd as while washing the bike or riding in heavy rain might get in the wiring system and might create some issues. The handle bar is good but once you ride in high RPM the handle vibrates a lot.

Our test riders stated Hero Xtreme Sports just with one word WOW! You can feel the power in the bike and YES this bike has what Hero was best known for READY PICKUP. The power delivery is RAW! Yes there are some vibrations but as a rider you will forget few drawbacks and move forward because we all know that nothing is perfect in this world. 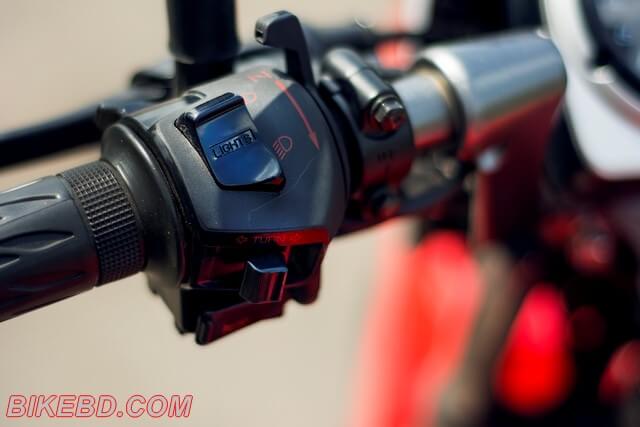 The handling improved a lot; you can carry more speed on the corners than its younger brothers and also the braking improved a lot. These days with the new Hero Xtreme Sports there is no rear sliding on high speed braking (duel disc brake) which used to be a problem with some previous Hero 150cc bikes.

The top speed of Hero Xtreme Sports we achieved in our test was 122 km/h but we have to put this on mind that when we did the top speed test the bike was only 600 km old; where you know that to get full performance out of a bike you have to ride at least 1200-1500 km.

The mileage we achieved with Hero Xtreme Sports was 34-37 km/L in Dhaka city and once again we believe that, once the bike crosses the break-in period the mileage will improve and you will get 35+ in a heavily traffic Dhaka city. On the highway the bike returned back 40+ when we rode the bike on Dhaka-Mawa highway.

Team BikeBD has previously tested Hero Xtreme & currently tested Hero Xtreme Sports for 700 km within two weeks. We are quite known about the bike, so we tried to test the bike with different riders’ attitude to sum up the uniqueness, modification, enhancements and also the negatives. Let’s share our findings below in clause. 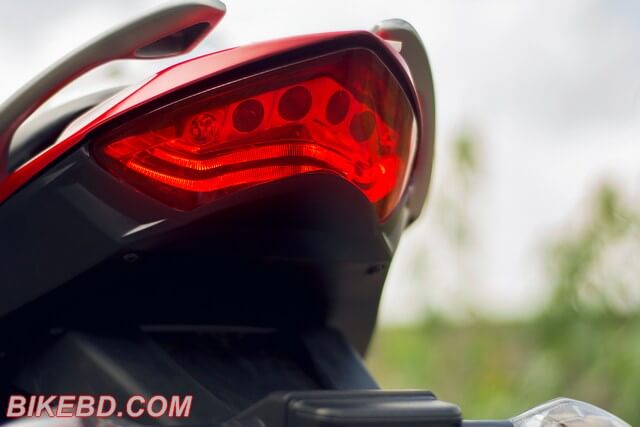 Here are some concerns we have noted should have to take in care by Hero for further improvement. And we think Hero Xtreme Sports will get more acceptability among the riders if those are addressed carefully. So take a look on our notes. 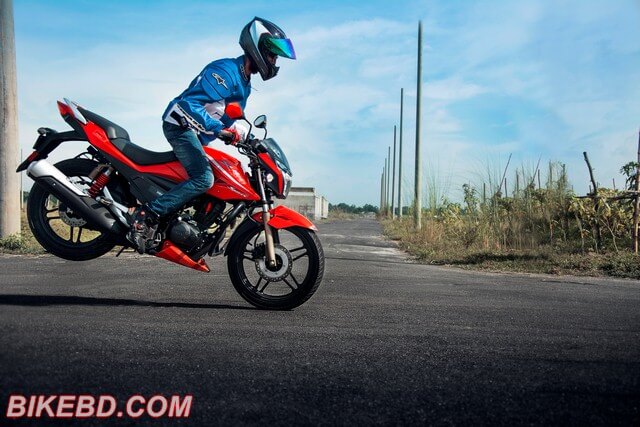 Hero Xtreme Sports is a fantastic bike; yes it lacks few things to fight up against the heavy weight Japanese brands but one of the best things you will LOVE about this bike is that, it brought back that sheer lunacy which used to have in the old days with Hunk and CBZ Xtreme. The most significant thing about the bike is that, against the few odds the bike is JOYFULL, SPORTY and a rear THRILLER to ride!