Overview:   After the very successful run of the Yamaha FZS or FZ16 it was time for Yamaha to give a through upgrade over the old FZ. The FZ was a marvelous bike in terms of the handling performance but not much fuel efficient though

So, this time Yamaha wanted to make the FZ best possible fuel efficient without compromising the things rider loves about it. Hence the FZ-fi (fuel injection) or FZS v2. No doubts that the FZS v2 is the only fuel-injected bike in its price range. How did Yamaha do in this time? Let’s find out.

Design:   The old YAMAHA FZ v1 got its body styling from the FZ1 or FZS1000 Fazer but this time they walked in different footsteps.

It has the same big muscular, contoured, forward leaned fuel tank but way edgier and sharper. The outer parts are made of plastic but the fit and finish is good as before. The headlight is a typical FZ type but has a newly designed headlamp cowl.

The under tank cowl has been redesigned for better airflow through the engine which results in better heat dissipation.

Yamaha claims that this cowl actually can push 23% more air than in the previous model. The 140mm section rear tire, the 41mm front shocks remains. There is a massive rear tire hugger for better mud guarding.

Actually the consumers of the 150cc street bikes want these two things which all of a sudden can change the look of the bike not to mention the handling performance.

Overall the whole bike has been redesigned. It looks absolutely gorgeous. The bike has many paint schemes and new decals are introduced by Yamaha over and over almost every year.

Instrument Console:   The instrument console of the FZS v2 is an all Digital unit and no surprise, it has been redesigned as well. The rectangular-shaped LED panel has orange backlit but it is way more readable now. The console is equipped with a tachometer, a speedometer, an odometer, a trip meter, and a fuel gauge.

The turn signal indicator, headlight indicator, and service indicator are placed in the sides of the console. A new eco-mode indicator has been added to let the rider extract the best mileage from the bike. The console is way better than the previous FZ.

Switch gears:   The switch gears of the FZS v2 are standard and of premium quality as every Yamaha bikes. Other switch gears include pass lights, headlight switch and other common switches included push-button start and Engine kill switch.

The Blue-core is a marketing term for Yamaha’s new and more efficient engines. The engine has 57.3 mm bore and 57.9 mm stroke means it is a square-shaped cylinder.

The engine uses both force-feed lubrication system and wet-sump lubrication like most bikes. This bike comes with 12 Liter fuel tank and feeds through an electric fuel injection system. Now the fuel injection is an automatic fuel supply system controlled by a computer on the bike.

The computer automatically increases or decreases the amount of fuel need according to the throttle position. The Wet weight is 132 Kg (with full fuel and oil) hence the bike has a power to weight ratio of 4.4 HP per 100 KG which is less than the previous FZ but it is way more fuel-efficient than before. It has an Electric starter but no kick starter.

The gear shifts are an international pattern that means 1 down and 4 up. The bike is equipped with a toe shifter so you have to worry about your shoes. The final drive is chain and sprockets.

Brakes:   The FZS v2 comes with a 267 mm disk brake with a dual-piston caliper in the front and 130mm drum brake at the rear. The disk brake setup should deliver just enough and linear braking performance.

Suspension:   The FZS v2 is equipped with a beefy 41mm Telescopic coil spring; oil damped forks at the front and a mono-shock at the rear which are attached with rectangular swing arm.

This suspension is superb in this segment for soaking up all the bumps of all kind roads with even a pillion in the back and offering great comfort at the same time.

Chassis & Dimensions:   YAMAHA used a Diamond type frame for the foundation of the FZS v2 which should give better stability on any time. The YAMAHA FZS v2 has an overall length of 2073 mm, a width of 770 mm, a height of 1050 mm and ground clearance of 160 mm, wheelbase of 1330 mm.

The wet weight (with tool kit, oil & 100% of fuel) of the bike is 132 kg. These mean that the bike has an average footprint in terms of dimensions. The length has increased and the wheelbase decreased than version 1.

Comfort and handling:   The FZS v2 is a very comfortable bike to ride, thanks to its well-cushioned seat and well-engineered shocks. The handling of this bike is very easy thanks to its 790mm seat height and 1330 mm wheelbase. The bike has 160 mm ground clearance which is enough for any road condition on Bangladesh.

Performance:   This is the part where the FZS v2 shines like glitter as did version 1. The bike is made for handling performance. The performance on the traffics, city roads.

It’s an ultra flick-able bike. As the version 1 loosed the efficiency with performance, it did not happen this time. Thanks to the Blue-core technology and the inclusion of the fuel injection system the bike’s average mileage per litter fuel is around 40-45 KM which is almost double.

Conclusion:   The Yamaha FZS v2 has remained the perfect Street naked in the 150 cc segment with performance, elegance, and style just like its predecessor (Source). The bike is actually a lord of the street as it is advertised. It is highly recommended for any rider who wants to ride with passion. 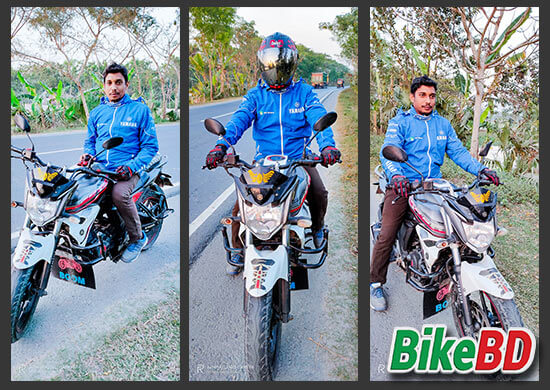 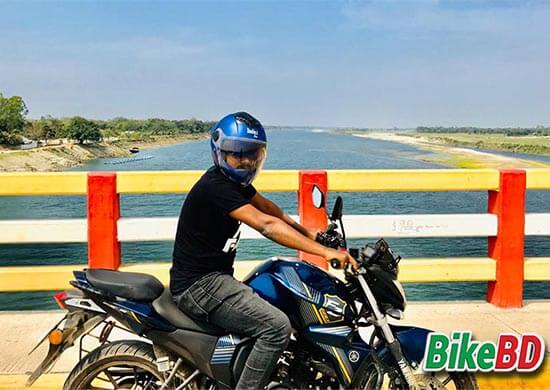