We were warmly requested for so many times by our visitors, fans, audiences and family members of BikeBD.com to write on the topic that which 80cc bikes will be better for them according to our country’s condition. So today we are here with top five 80cc bikes in Bangladesh list. Let’s check it out and find out which one will be best for you guys according to your perspective. 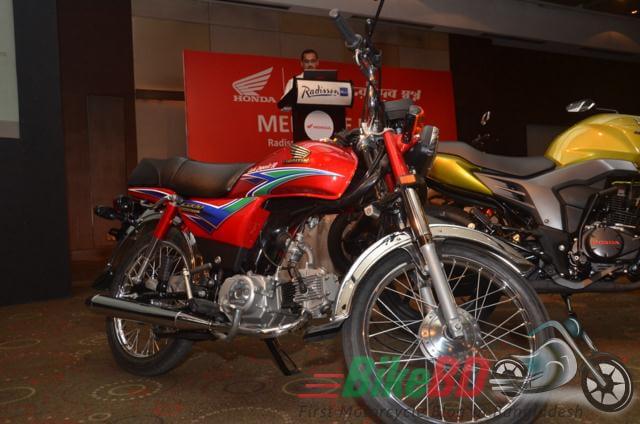 I don’t think that I have to say anything for the recognition of this company called “HONDA”. It’s so much popular in our country so that many of us use the word “HONDA” as a synonym of motorcycle or bike. This company has won trust and reliability by their product's built quality, durability, comfort and brand image.

Check Out The Price of Honda CD80

This is the Top 80cc bike of our country which is named Honda CD80. It has standard 80cc looks with solid colors all over its body and parts. This has attractive logo of Honda in the oil tank and name of model in the lower part under the seat. Honda CD80 has comfortable long seats and greatly positioned handle bar which makes the control and balance of this bike great. It delivers highest efficient mileage amongst the all the bikes in our top five 80cc bikes in Bangladesh. The spare parts are also highest available in all over the country. It is the most hassle free bike amongst these also. So this bike has so much good characteristics that many bikes are being behind of it though they have also quite a lot good characteristics.

Check Out The Specification of Honda CD80

This bike is for those who wants the best brand reliability, trust worthiness, best experience, comfort, highest efficient mileage, highest durability and highest hassle free bike at once. For this ultra good characteristics package this has became our top listed bike and placed in our top five 80cc bikes in Bangladesh 2017 list. 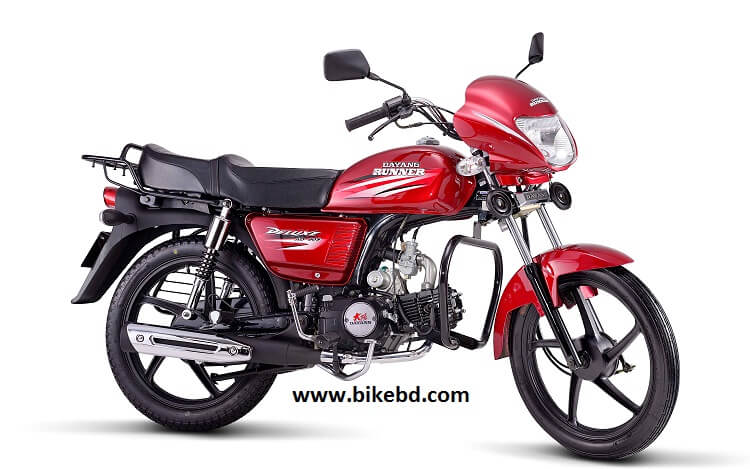 This is another top listed bike according to our top five 80cc bikes in Bangladesh 2017 list. It has a very big selling number record in our country. The spare parts of this bike are almost available in almost all over the country. It has great looks which is different from the standard 80cc bike’s look and it also got good speeding ability also. In fact it is the top speed able bike according to our top five 80cc bikes in Bangladesh 2017. It has good looking head light and rear light with solid colored body. It also got long seat which gives the riders comfortable experience. This bike has alloy wheels at both ends.  Wheels and exhaust pipe is very solid colored which increases the looks of this bike. It also delivers good efficient mileage along with its looks and speed.

Check Out The Price of Runner AD80S Deluxe

This bike Runner is for those who are looking for a bike with good looks, comfort, speeding ability and also fuel efficiency with spare parts availability. This is slightly behind from the best 80cc bike according to our top five 80cc bikes in Bangladesh 2017 list.

Check Out The Specification of Runner AD80S Deluxe 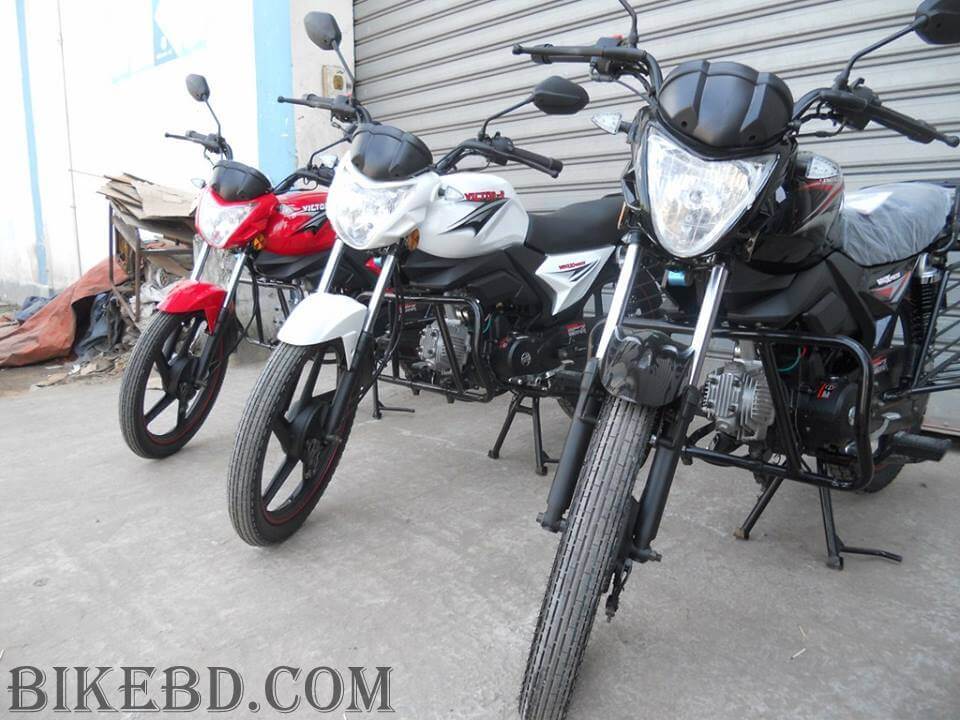 The 80cc bike with the best look of our list is this Victor-R V80 Xpress. Though it is an 80cc bike but it has great looks as anyone would have think that it is a descent 100/110cc bike. It has stylish head light and attractive rear light along with slightly muscular oil tank which is also solidly colored. The bike has capacity of carrying 9 liters of fuel and company claims that it would deliver 70 KM/L. It has 80 kilograms dry weight and good bumper to protect it during crashes. This bike also has updated characteristic of self starter as it is compatible to its updated look.

Check Out The Price of Victor-R V80 Xpress

This bike is mainly for those who are looking for an 80cc bike with great looks which will obviously catch the eyes of other persons and also looking for comfort and descent mileage at a good price range. Though it has the best looks in our top five 80cc bikes in Bangladesh 2017 list but it is not the best bike in its segment.

Check Out The Specification of Victor-R V80 Xpress 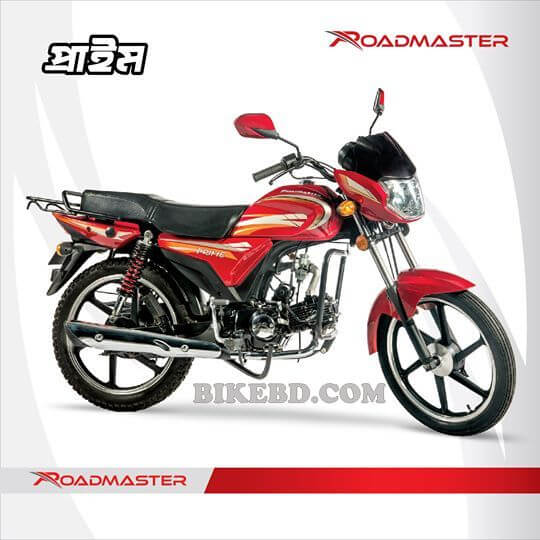 Just a few days ago it was the cheapest bike of our country but now it is the second cheapest bike of our country. This bike has got standard looks and it has also some exceptional characteristics. It has long seat with good looking head light and rear light. It has digital gear indicator in the middle of its whole meter design. This bike also has self starter, alloy wheel and built in mobile phone charger cum USB port. Roadmaster Prime has capability to carry 8 liters of fuel where approximately 1 Liter of fuel will be in reserve sector. It has 87.5 kilograms dry weight and 4 speed transmissions as usual according to 80cc segment. It also has telescopic front suspensions as Runner Bike RT but it has twin-spring loaded suspension in the rear side. This bike can deliver approximately 65 KM/L as per company claim. So it would be a great package of standard looks, fuel efficiency, comfort and good durability.

Check Out The Price of Roadmaster Prime

So the consumer of this bike will be those persons who are also looking for a very low cost bike with great fuel efficiency and comfort. We can say based on the market information that this bike is satisfying its consumers also and as per its performance it achieved its place in our top five 80cc bikes in Bangladesh 2017 list.

Check Out The Specification of Roadmaster Prime 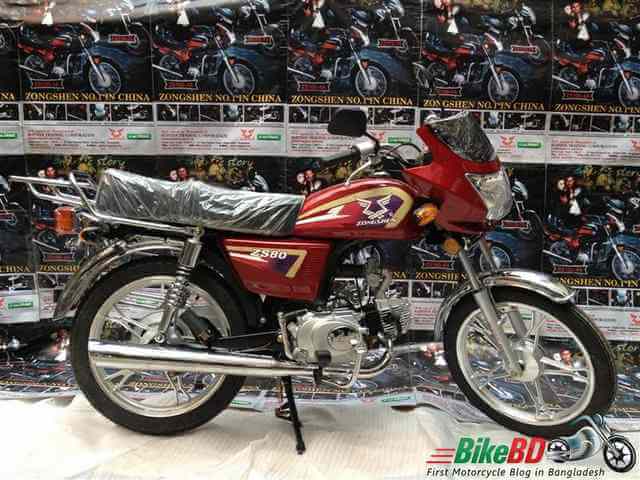 This is the another great 80cc bike in our country which is being produced by Zongshen Company. It has good standard looks compared to its segment. This model has stylish oil tank, some designs on the tank with the logo of Zongshen and both head and rear lights. It has 4-stroke, single cylinder and air-cooling engine which helps the bike to deliver high efficient mileage and great smooth riding.

Check Out The Specification of Zongshen ZS80

This bike has alloy wheel at both sides. This model has got self and kick both type of starter system which makes it easier to start and it’s also saves fuel as per company claim. Dry weight of this bike is 85 kilograms. It has wet type multi-plate clutch and 4 speed transmissions. At last but not the least it has attractive engine guard which acts useful and increases attractiveness of this bike.

Check Out The Price of Zongshen ZS80

This bike is for those who are looking for an affordable bike in our country with standard looks, comfort and high fuel efficiency as per company claim at once. For all these characteristics and abilities this bike has made it to our top five 80cc bikes in Bangladesh 2017.