Due to the availability of huge sorts of merchandise in the market, humans used to buy in step with the call for within reasonable Price variety. Their merchandise begins with 50 cc bikes and emerges as with 150cc. Even though these days, utilization of 50 cc bikes is decreased but eighty cc motorcycles are available and nevertheless demanded inside the marketplace.

A few branded eighty cc motorcycles are available wherein there are a couple of 80 cc motorcycles from Runner are also available. Runner AD 80S Deluxe is one of them and taken into consideration as the most bought bike within the segment.

Runner AD 80S Deluxe is a form of equal searching as Runner AD-80S but there is some distinction with colorations. It appears to be a widespread class bike. It really is quite small but thinking about 80cc it’s satisfactory.

Runner AD-80S-Deluxe Runner enterprise's a value-saving motorcycle. Although smaller in size, the bike is quite beneficial for town riding. It isn't always thrilling to look at, however, due to top mileage and low rate it has to end up pretty famous with the people of Bangladesh.

This bike is likewise very useful for the town's Jam Road. Buying expensive motorcycles is very not going for low-profits humans in Bangladesh. Because of the low rate, Runner's merchandise is able to meet the needs of normal human beings. Although it isn't so attractive, it has received the self-assurance of normal people with its mileage.

It has been made considering the wishes of the commonplace man and it has been priced keeping in mind the buying power of regular rural and small metropolis human beings. The complete specs of Runner AD 80S Deluxe are given below.

Excluding the engine, carburetor suspension, and electronic system, the majority of the metal and plastic components are produced in collaboration with small businesses that are technically supported by RAL. Therefore, Dayang Runner AD80S could be described as to be a Bangladeshi product.

This economy engine of small capacity generates 4.58KW at maximum strength as well as 5.7NM of torque, which is a great amount to be a reliable commuter. We haven't seen any information on the fuel efficiency of the vehicle on the RAL official website. They have unofficially confirmed that the fuel efficiency of the Dayang Runner AD80S is more than 80km/L. Therefore, the mileage is appealing to the eye that this bicycle has.

Regarding maximum speed, RAL states that the speed is in excess of 80km/h. This may vary in relation to other circumstances. Thus, a compact commuter with decent fuel efficiency and a nice figure for top speed attracts the purchasers.

There's also an upgraded version of the standard Dayang Runner AD80S. And that's the Dayang AD80S Runner Deluxe. It's the same as the regular AD80S however the difference lies in the color and finishing.

The Deluxe version has an all-black chrome finish and steel parts. The mudguards are constructed from plastic and not metal shit. The option is yours and customers are able to pick any one of them.

Dayang Runner AD80S is a compact and efficient commuter. It can be used to commute on a daily basis whether you're a male or woman, a boy or girl. You don't have to be concerned if you're a worker or just a laborer. AD80S is made for simple riding for all kinds of riders.

It is quite a spacious and comfortable seating area that allows you to sit comfortably with a medium-figure rider and the pillion. There is no problem riding as the handlebars are quite wide and have an upright posture. The seat is in a straight position. The pedals and footrest are also in the best location to allow for an enjoyable commuter.

If you require certain items or baggage, don't be concerned as there's a large and heavy transporter on the bike. It is also able to take on loads of considerable weight.

The suspension and braking design on the Dayang Runner AD80S seem satisfactory for a decent commuter. Both rear and front brakes are drum-type. The front suspension comes with the hydraulic fork telescopic and the rear brakes are sealed with coil springs enforced. Therefore, the AD80S has the potential to be a great commuter.

The looks of Runner AD 80S Deluxe aren't always so terrific. Its miles are a favored class motorbike with easy appearances. The seating position is traditional but now not so comfy. It has a mild-fashioned fuel tank with easy dust protection. From the front, it appears nearly rushing because of the stylish headlamp.

The handlebar is a chunk conventional designed but at ease. Folks who are familiar with sports activities motorcycles may additionally want to stand a little trouble at the primary time. Except, it has black-colored alloy wheels.

Engine electricity of Runner AD 80S Deluxe is a form compatible with relaxation available sports motorcycles. The engine capability is 85 cc in which the max power is 4.58 kW @ 8500 rpm with appropriate 5.5 @ 5500 rpm max torque. In line with the net websites and the organization, its top speed could no longer be much less than 90 km per hour. Besides, it has a CDI ignition machine and a trendy electric starter is protected with a kick. Overall four pace gearbox is added to the motorbike.

The bike Runner AD 80S Deluxe is normally a small motorbike because of terrible cc limits. But, consistent with the size, it has the same old requirement. It is 1880 mm lengthy, 865mm huge, and 1170mm excessive. However, for tall human beings, the bike might not be suitable because of its bad height. By counting on it, we can see the maximum users of the bike aren’t so tall. But, its kerb weight is simply 86.7 kg because of this it is quite lighter. So, it might be best for those who couldn't deliver a weighty motorcycle. The seat isn't always relaxed but can take 3 characters on it.

The front suspension of Runner AD 80S Deluxe is telescopic and the rear suspension is coiled five steps adjustable, front and rear each suspension is authentic and fantastic. However, one thing that isn't always gratifying is that enterprises do not use any disc brake for the bike in our country. The front disc brake is wanted. But, every drum brake is the pinnacle.

Mileage is good-looking of the bike Runner AD 80S Deluxe. It’d provide not less than 65 km mileage on the highway and extra than 55 km in town. So, the average mileage could be at least 60 km. 60 km mileage is great enough in a small metropolis and rural vicinity.

Completely analog and little conventional designed instrument consoles are delivered to the bike in which analog speedometer and tachometer are positioned. Except, there are also gasoline gauge 100 symptom switches located.

Only the Red version of the bike is available.

The competitors of the Runner AD-80S Deluxe are listed below: 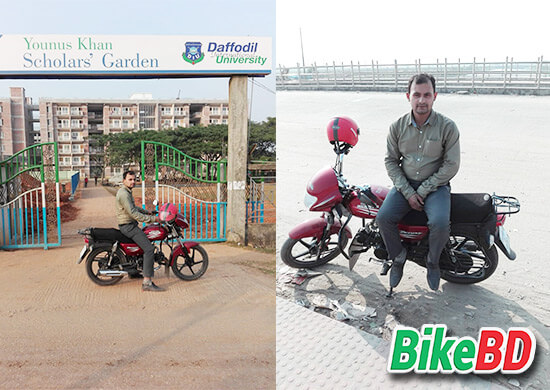 1. What is the mileage of the Runner AD-80S Deluxe?

Answer: The Runner AD-80S Deluxe has a tentative mileage of around 55kmpl.

Answer: The Runner AD-80S Deluxe is made in Bangladesh by the Bangladeshi company Runner.

Answer: The Runner AD-80 Deluxe is a commuting bike.