In the 125cc naked street sports segment, Kawasaki and KTM just signed in with two brand new motorcycles (Source). Within a quicker transit both the motorcycle hit our market. Thereby, the rivalry took place between the machines on our roads. Hence, covering the comparative features here we’re presenting Kawasaki Z125 VS KTM 125 Duke Comparison Review. So, let’s fuel up the rage between the rivals.

The Kawasaki Z125 vs KTM 125 Duke both the machines are the brand-new entry within the category. Through these models both the company entered into the 125cc streetfighter category. Hence, they somewhat made the miniatures of the bigger models fitting with 125cc engine & other peripherals.

Therefore, the Kawasaki Z125 build like a clone of Kawasaki Z250SL model. On the counter the KTM 125 Duke just like the true copy of KTM 200 Duke. Thereby, both the machine looks, design, and appearance already quite a known figure to the bike enthusiasts. 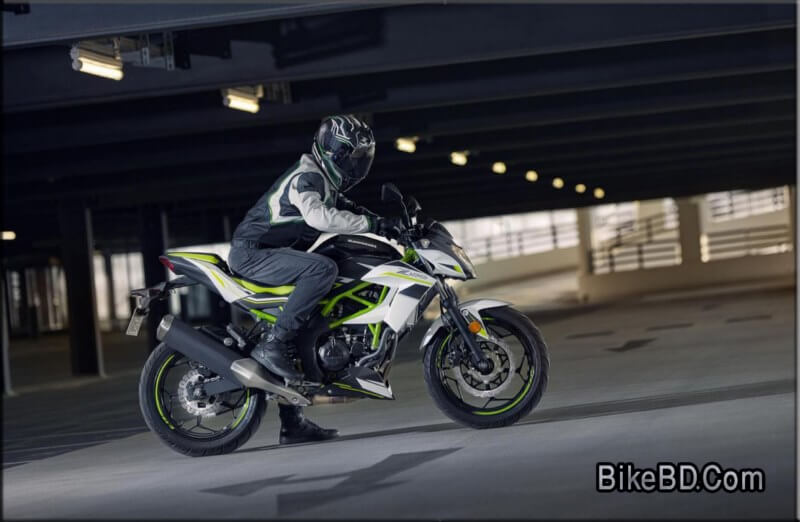 Whatsoever, Kawasaki Z125 comes with a cutting-edge and sharper profile from top to bottom. The sharper single-pit headlamp, taillamp all are iconic to its aggressive Z-Styling. Along with the digital instrument cluster, extended tank cowling, and sporty split seat, it grabbed the true streetfighter appearance.

Here, the tubular steel frame kept naked & exposed with eye-catching shades. Further, aggressive bodywork adopted all over the exterior. Hence, the color and shades also profiled to give a refreshed look. But obviously the core design is a clone of bigger Z250SL. 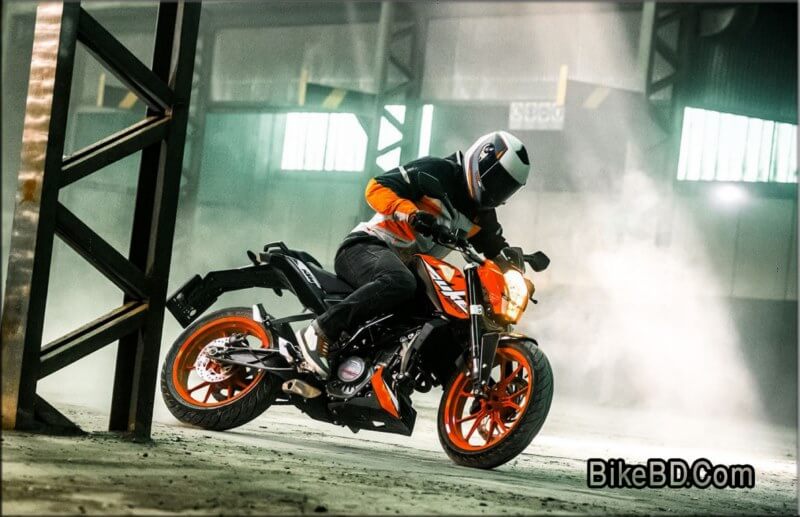 On the counter, the KTM 125 Duke comes with a very known figure of 200 Duke (Indian Version). The model is also exposed to a sporty trellis frame and naked bones. The engine is also exposed and conventional muffler omitted with the underbelly exhaust.

This single headlamp and compact tail are iconic to the earlier bigger model. Here the seat is split, the fuel tank is edged. Further, the panel is compact and the entire body is refreshed with new shade and color scheme. Hence, even being a clone, the machine got its own identity comparing with its elder sibling. 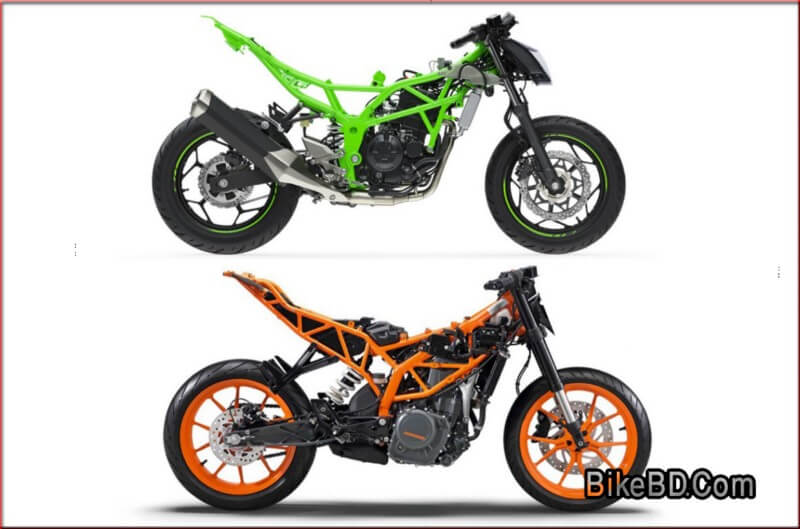 In the frame, wheel, brake, and suspension system both the machine come with a very competitive profile. Here both the Kawasaki Z125 vs KTM 125 Duke just compiled with their bigger models’ structure and features.

The Kawasaki Z125 just picked all the elements of Z25SL. It profiled with the same tubular diamond steel frame, sub-frame and swing arms. Further, minimal dimensions may vary upon the category wise refinement.

It carries the same design of paired 10-spoked alloy rim with tubeless type tires. The tires are respectively 100/80-17 and 130/70-17 in front and rear. The braking is hydraulic disk brakes on its both wheels. Further, the braking is enhanced with Dual-channel ABS enhancements.

In the suspension system, the Z125 carries the 37mm upright telescopic-fork suspension in the front with 110mm of travel. At the rear its Uni-Track mono. The setup is Gas-Charged and comes with a decent 120mm of travel.

On the counter, the 125 Duke similarly profiled with 200 Duke frame, subframe, wheel, brake, and suspension system. It carries the same steel trellis frame that comes with matt powder coating. The frame is exposed and swingarm also reinforced with extreme torsional stiffness.

The wheels of 125 Duke comes with separated 10-spoked allow rims with impressively wider tubeless type tires. Here the tires are 110/70-17 in front and 150/60-17 at the rear. Further, both the wheel featured with wider hydraulic disk-type brakes. And it enhanced with single-channel ABS enhancements.

In the suspension system, both the suspension of 125 Duke is WP suspension. Its 43mm USD Inverted telescopic fork suspension in front that comes with impressive 150mm of travel. At the rear, it featured with mono suspension where the travel is 150mm. Thereby, both of the suspensions are the advanced feature of this bike. 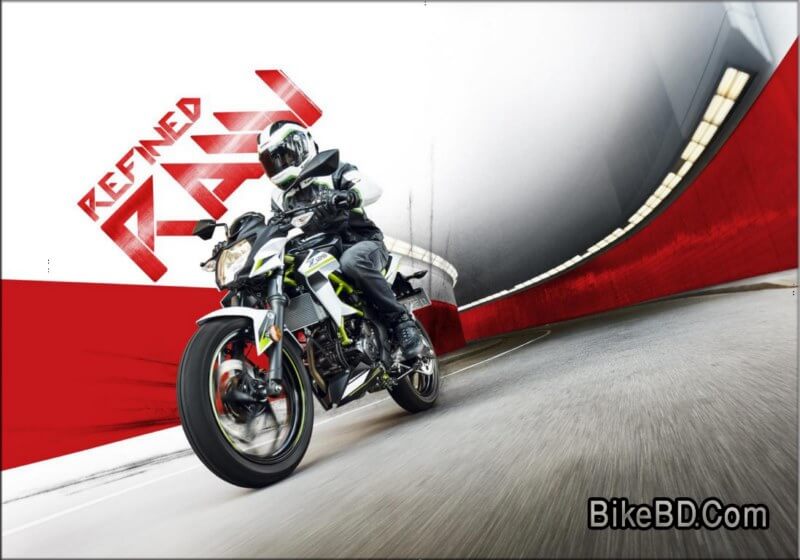 The Kawasaki Z125 vs KTM 125 Duke, both the motorcycle is from the naked streetfighter category. Hence, obviously both are profiled with city riding and upright commuting feature and fun playing characteristics.

The Kawasaki Z125 featured with quite a sporty upright riding ergonomics and seating postures. It comes with one-piece pipe handlebar that mounted upright against the sporty upright split riders’ seat.

Here, all the control lever and pedals are placed for comfortable riding. Further, it lets an aggressive upright riding supporting with a comparatively low-mounted handlebar. Thereby, it gives the rider an aggressive street fighting attitude allowing comfortable & nimble rides. 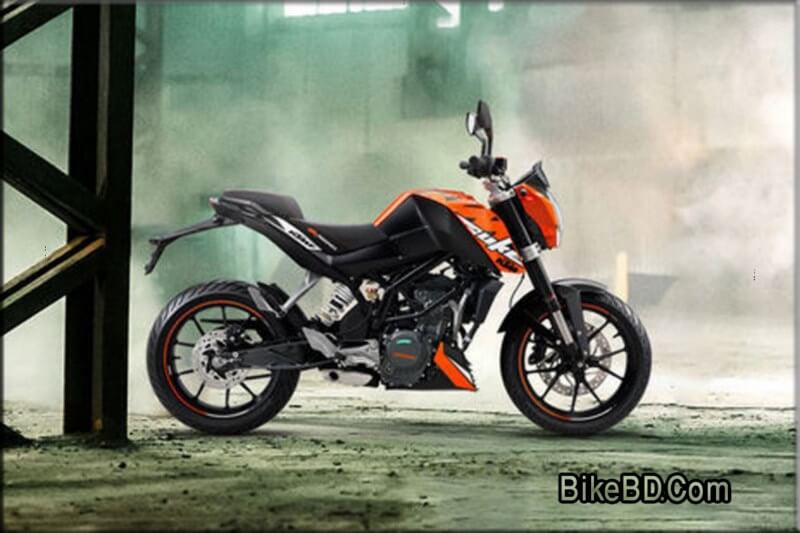 On the counter, the KTM 125 Duke profiled with completely upright riding posture and ergonomics. It also comes with pipe handlebar and upright split seating arrangements. Further, all the control lever and pedals are also arranged for comfortable upright riding positions.

Hence, comparatively the high-mounted upright pipe handlebar will give you extra confidence. Moreover, the entire riding setup is capable to give the rider experience of better handling even in uneven or odd situations. 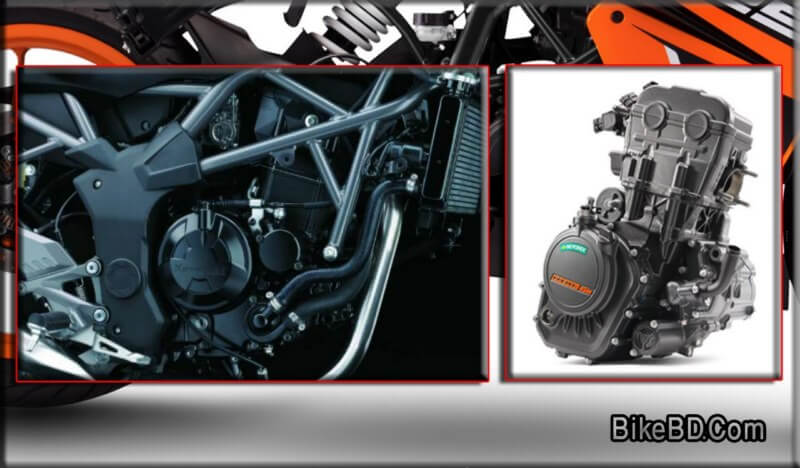 The Kawasaki Z125 vs KTM 125 Duke, both the machines come with the same displacement and type of engines. Both the engine is 125cc with the bore & stroke of 58.0mmX47.2mm. Both are single-cylinder, four-stroke, and liquid-cooled engine. Further, both featured with DOHC 4-Valve. But the compression ratio is not officially specified for 125 Duke whereas Z125 comes with 11:7.1 ratio.

Whatsoever, both the engine electronically controlled with ECU and fuel supplied with electronic fuel injection system. Hence, these 6-geared engine produces almost the same amount of power and torque. The Z125 delivers 11.0kW of power and 11.7NM of torque and in 125 Duke its 11.0kW and 12NM respectively.

So, you can see there are nothing significant that can make vital performance differences between the engines. But obviously both the machines will allow different throttle response, acceleration, and performances up to the rev-lines considering the different ECU-Mapping. Further, wheel, brake, and suspension setup will play another vital role including overall weights. That’s it. 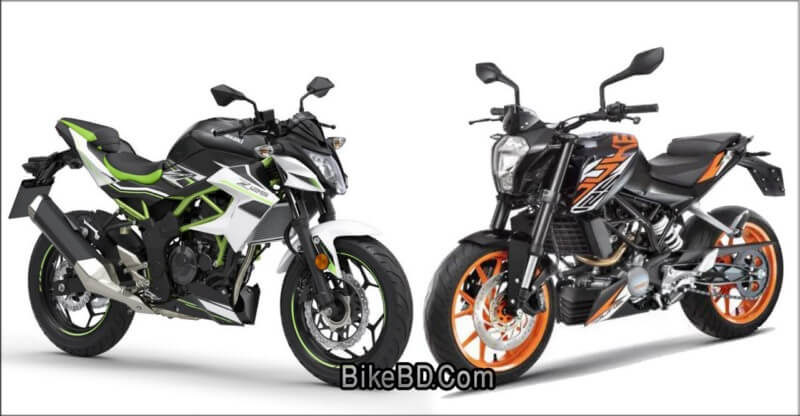 Dimension All the specifications are subject to change upon company rules, policy, offer & promotion. BikeBD is not liable for the changes.

Rule The Road With Attitude

So, readers, that’s the profile and feature differences between Kawasaki Z125 vs KTM 125 Duke. Here both the machine belonging with streetfighter, therefore, street naked sports features and ergonomics. But you can see, obviously both of them carrying significant feature differences.

Thereby they possess different riding tastes and controlling characteristics. Further, both of them carrying the different corner of advancement as well as back lags. So the choice is yours, which will fit with your needs and with which you will rule the road. Cheerzzz!