Nowadays Bikes are really important gadget or companion for all kinds of people. In Our Country Bangladesh Bikes are available and also core attraction for young generation and all kinds of people. Day by day bikes are ruling our country roads. So there is many kinds of motorcycle in our bike market, so which is better and which are not by choosing bike we get kind of confused. So we try to get help or review from our neighbors, friends and also we search in internet and YouTube. So we BikeBD got some Test Ride Reviews for you guys. 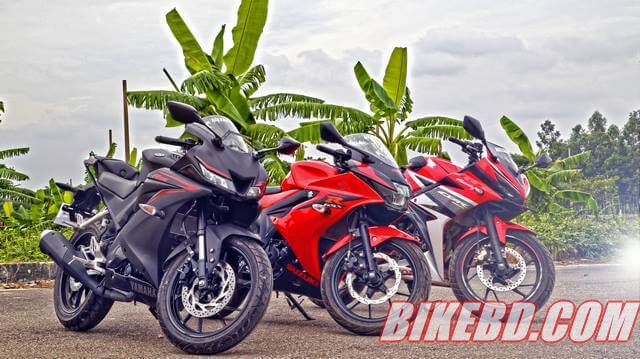 See All The Available Brands of Motorcycles In Bangladesh Here

These Test Ride Reviews are based on performance and capability of motorcycle. Not only that test ride reviews show that which bikes are best in there own segment. Honda CBR150RThe Honda company is the topmost bike maker in the world. Honda CBR150R is one of their invention. It’s a packed combination of power and performance. This a good bike for sports related riders. Lest See The Test Ride Review Of Honda CBR150R.

Lifan KPR150 Rasel industries limited launch Lifan KPR150 in Bangladesh on 3rdApril 2015. This is one of the most anticipated bikes among the bikers of Bangladesh. Its engine 4 stroke single cylinder water cooled type. In design, looks , power , performance it’s a good bike .

Yamaha R15 V3Yamaha R15 V3 is a well known bike company all over the world. Its stylish looks attract young generation and also aged people. Its 155cc engines is liquid cooled. This bike is a new revolution to the 150cc segment bike.

Race Fiero150FRRace Fiero150FR is a sports bike. This is not a everyday use bike for an average bikers, this is a bike that is made for people who enjoy riding a bike on the edge of a cliff and wants to fight with the bike rather than keep it in their garage & adore it.

Keeway Superlight Keeway Superlight 150 is a 150cc cruiser bike which is targeted to the cruiser lovers of the country. The Superlight is a stylish bike which certainly catches the attention of the people and also provides good cruising and good riding experience. The bike is powered by a 149.3 cc air cooled engine which gives 12.1 BHP & 11 NM .

Znen T6Znen is one of the leading scooter companies from China & in Bangladesh all they sell is scooter to the local market, day by day they are becoming very popular among the scooter lovers in Bangladesh. Znen T6 is powered by a 150cc air cooled engine which gives out 12.3 BHP & 10.5 NM of Torque.

Znen Vista150Znen Vista 150 is a luxurious two wheeler scooter. It is a scooter dual headlights with stylish look and also has many kinds of modern features. It is 150cc air-cooling single cylinder four stroke engine with automatic gear & quick acceleration. Lets enjoy the test ride review of Znen Vista 150.

So this all our test ride reviews which is complete in 2017. Subscribe our channel for latest videos updates. So readers that’s all for now, for further updates keep visiting our website and subscribe to our BikeBD Youtube channel, and also eye on our BikeBD Facebook Fanpage.