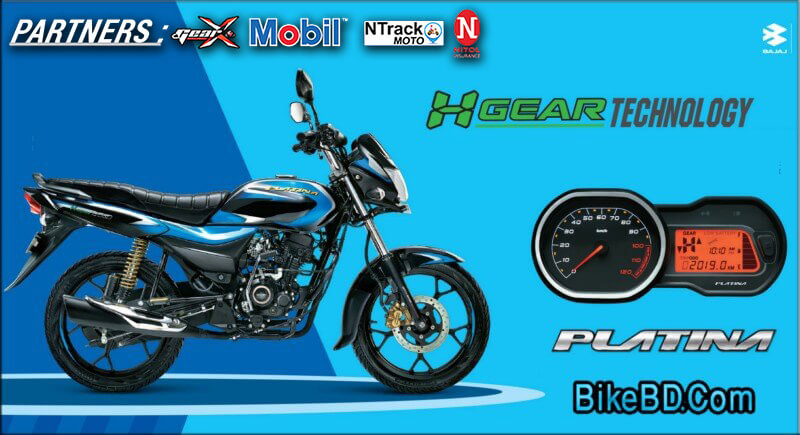 The Platina 110 H-Gear is the brand-new edition in the Bajaj Platina series. The series is an absolute commuter series. It represents a number of featured models that comes with competitive commuting features. Thereby, the new Platina is not out of that core trend. Further, it profiled with some attractive and enhanced commuting features.

In the design, the H-Gear is carrying the same iconic looks & design of the series. It comes with the same designed single headlamp, taillamp, fuel-tank, side-panel and seat. Besides the iconic design, it also comes with few updates on the exteriors.

Here the headlamp remaining in older shape with new LED DRL placed on the shield. But the motorcycle got a brand-new ODO console with some enhanced parameters. The unit is analog-digital combo unit. It displays H-Gear features along with regular gadgets.

Secondly, the model got a brand-new seat. It multi-stitched, more cushioned, longer, and wider in dimension. Along with the longer seat the side panel is also extended with a longer dimension. Again, new updates also came with the brake and suspension system.

Finally, as obvious, the new model got the new scheme of color and shades. The engine also got a matt black finish. Therefore, overall it got a new look, design and a refreshed identity.

The new Bajaj Platina 110 H-Gear carrying the same tubular semi-double-cradle frame as other Platina adopted. But the dimension may vary upon new enhancements. Further, the motorcycle comes with sporty & paired 10-spoked alloy rim including 80/100-17 tires on both wheels.  Here both the tires are tubeless type.

In the braking system, the model comes with 240mm hydraulic disk brake in the front. At the rear its 110mm drum type. Further. the braking system enhanced with Anti-skid braking system. So, in terms of the wheel, brake, and suspension system the new H-Gear got a bundle of updates.

The new Bajaj Platina 110 H-Gear is the latest model in the Bajaj Platina series. It's solely a commuter series. Therefore, the new model is loaded with some competitive commuting features. It also profiled with a very comfortable and nimble riding & handling features along with new H-Gear guidance.

The new H-Gear enhanced with a unique feature GSG. The GSG is an advanced Gear-Shift-Guide that provides gear shifting instructions through the ODO display. Moreover, the dedicated H-Gear System allows a smoother ride on the highways. Thereby it helps for précised gear shifts and thus ensures a comfortable ride. Further, this GSG also helps to ensure maximum fuel economy. 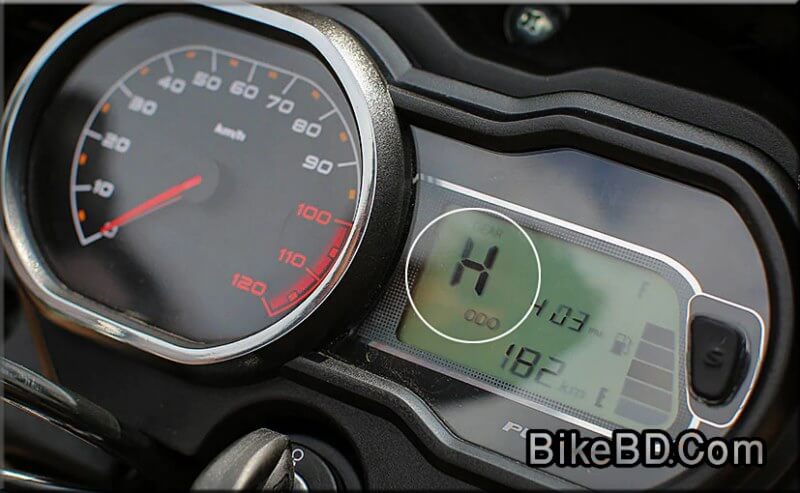 In other feature, according to Bajaj, this is the most updated and comfortable Platina ever. The riding arrangements and characteristics of H-Gear are completely upright with upright pipe handlebar and other control levers. The seating is re-arranged, and it's more cushioned. It’s also wider and longer than the other models. Hence, it provides maximum comfort to the rider as well as the pillion.

The new Platina also comes with a softer profile of suspension setup in the front and rear. The suspensions are more responsive with longer travel profile. Further, the braking also updated with front disk brake and Anti-Skid linked braking system. Moreover, its 118.5kg of the lighter weight made the bike agile and handy to ride, handle, and control. 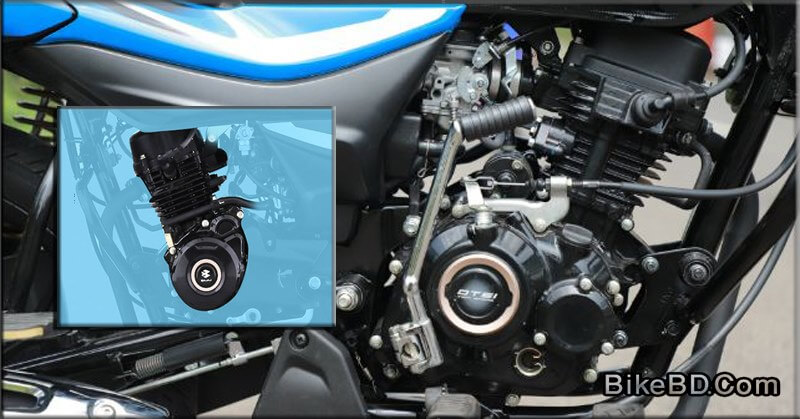 The new Platina H-Gear comes with the same 115cc engine that featured in Platina 110 ComforTec. It’s a single-cylinder, four-stroke, air-cooled, 2-valve engine. The engine is a DTS-I Engine that featured with Bajaj ExhausTEC features.

This fuel-efficient engine can deliver the maximum 8.6PS of power and 9.81NM of torque as delivers in ComforTec. But in H-Gear the engine is featured with 5-speed gears where the last gear is featured for smooth highway rides.

Hence, in H-Gear the engine is re-tweaked for more efficiency. Thereby, it can deliver around 84kmpl (According to ARAI FE) of fuel economy. Further, it can gain the top speed around 90kmph as tested internally in Bajaj premises. Therefore, altogether the new Platina 110 H-Gear is more efficient of performance and economy. Why Suzuki Gixxer Mono Tone Edition Is So Much Popular?