Fazer FI V2 is a high performing bike which is available in the Bangladesh motorcycle market. Fazer FI V2 Price in BD is 299,000 Tk.

YAMAHA FAZER FI V2 is a bike in the FZ series of YAMAHA’s stable. If you are a biker from Bangladesh, you must know that the FZ series in Bangladesh and the subcontinent is a favorite. This series set the benchmark on its launch back in the days and all the other manufacturers followed soon. The 2nd version of the famous series has been present in Bangladesh for quite some time now. The bikes of YAMAHA are currently sold by ACI Motors Ltd. The FAZER FI v2 is one of the most favorite bikes in this country and subcontinent. See Yamaha Fazer Price In Bangladesh here.

YAMAHA FAZER was first launched back in 2008 along with the FZ series. The Fazer-fi V2 was introduced to the market by ACI motors. Yamaha bikes were previously imported by Karnaphuli Motors. Young motorcycle enthusiasts are eagerly awaiting the Yamaha Fazer- fi V2. This has gone under serious changes in between with different iterations. The first major refresh is done with the updated body and engine specifications giving birth to the FAZER FI V2.0.

Basically, the whole bike is built from the ground up. The bike was first launched in the middle of 2014 in India and for the 2018 model, it was refreshed again with an improved FI system. Everyone was eagerly waiting for this bike to come to Bangladesh. This bike now comes with a decreased engine displacement of 149cc instead of the former 153cc one in the era when every other manufacturer is trying to throw a bigger mill in their offerings.

The Fazer was known for its smooth and refined engine. Now the fuel injection has done its work very well and makes it super-refined. Fazer, the previous model, had complained about the fuel economy. Yamaha has done great engineering with this Version 2 model. Yamaha has reduced the cubic capacity by a few numbers that give better mileage.

Yamaha Fazer is known for its control and stability. However, the Gixxer SF excels at power. Both bikes have adequate suspensions to get through potholes easily. Gixxer SF is able to make sharp turns around corners and can lean more than Fazer, while the Fazer allows you to feel more comfortable in the twisty.

Key features of YAMAHA FAZER FI V2.0 are described in a nutshell below.

This semi-faired bike features a design that is striking with a strong presence in the streets and gives sheer support for touring on the highways. Combined with a refined engine and its performance, this bike delivers benchmark-level performance. The styling shows off pure class. The bike has been filled with features useful for the enthusiast bikers in mind. The bike now gets a Split-style seat.

The shape of the bike attracts the rider to climb on and pull the throttle wide open and get lost in the highways. The head and taillight assembly are both renewed and now feature an LCD display in the fully digitized instrument cluster. The beautiful chassis and the fairing provide the utmost comfort while riding it.

The seating is very much comfortable with an upright rider triangle and widened pipe handlebar ideal for sports commuting. The fuel tank is also very cool to look at with an iconic shape and the minimalistic graphics on the attractive body colors also add up to the cool factor of this bike. There are also wide tires at the ends of the long-wheelbase that build the rider’s confidence.

There are two colors of the YAMAHA FAZER FI V2.0 in Bangladesh. Both the colors available for this bike are very attractive and they are:

Overall the bike has a distinct stance for standing out in the crowd. And from any angle, you know it’s a FAZER.

The YAMAHA FAZER FI V2.0 is an amazing performance motorcycle. The wheelbase is 1330mm on which the 137 kg bike stands. The bike is balanced very well for its time-tested Diamond frame. The bike has now got a 12 L fuel tank which feeds the engine through the Fuel Injection system and is ignited by TCI (Transistor Controlled Ignition) system.

The suspension system of this bike has a set of trusted Telescopic forks up front and a Mono Shock at the rear. The front brake is a 267 mm Disc paired to the 5-spoke alloy wheel with a 100/80-17 M/C 52P tire. The rear brake is a 130 mm Drum attached to the 5-spoke alloy wheel that is wrapped in 140/60R-17 M/C 63P tire. Both the wheels have tubeless tires for better performance and to avoid sudden deflation.

The YAMAHA FAZER FI V2 is targeted to the sporty-minded commuters and occasional tourers. The bike is mainly built for inter-city commutes and so, the highway rideability is excellent in this motorcycle. Just the catch is, the turning radius is large and so moving through nooks and corns of the city is a bit tougher than some of the competitors. College and university students and young people are the target customers of this sporty bike. The bike has excellent design language to remind you of its freshness as well as has enough performance to tackle almost every riding needs. You can see YAMAHA FAZER FI V2.0’s first impression review here by BikeBD.

Why Choosing the Yamaha Fazer FI

Crosswind pressure, crossing large vehicles, focusing the headlamp on the track even while maneuvering the handlebar, or looking at the rear of the vehicle in the mirror, without bending your head, are all examples of how to deal with this. Fazer FI can help you to tackle these issues with great skill. Proper weight distribution is also important if the traveler has heavy luggage. These weights are balanced with the front panel weight and the air pressure on the front aerodynamic panels.

Fazer FI users will have few problems on a city ride. A traveler, however, rides quieter and more steady than any other city rider because he or she is more familiar with the bike dimensions.

Based on 67 User Reviews

In my eyes, Yamaha Fazer FI V2 is the most comfortable and smooth braking bike in Bangladesh...

The queen of my dreams

Yamaha Fazer fzv2 150cc car is a very good car because this car is much better than..

About my life line

Love you my Life.

All side best this bike

Fazer V2- a bike that fullfil your all desire

I am using my motor bike Fazer V2 for 6years almost and travelled 30K KM so far...

Bike is not a machine It's a boy's passionate love

The motorcycle I use is a Fazer FI version two model of Yamaha brand. My motorcycle will..

I think Yamaha Fazer FI V2 needed double disc brakes which would have added a lot of..

It's a very good looking & very goid controling system but milege is not up to the..

This a Perfect Bike.. Breaking And Controlling.. And Spare parts Are Available.. And So Comfortable this bike....

I have riding this bike for 4 years. I just love to ride the bike because its..

I purchased yamaha fazer v1. This bike is so close to my heart, i used to call..

My dream my bike

i am very lucky bcoz i am a yamaha Fazer user.

Best bike in my life

Its my first bike and i ride it e very day

Everybody ride bike in safety first

One of the most comfort bike BD

Satisfied with my bike.

This bike is Very good.

Love u my baby

i love my bike

It will be better if rear disc is there. 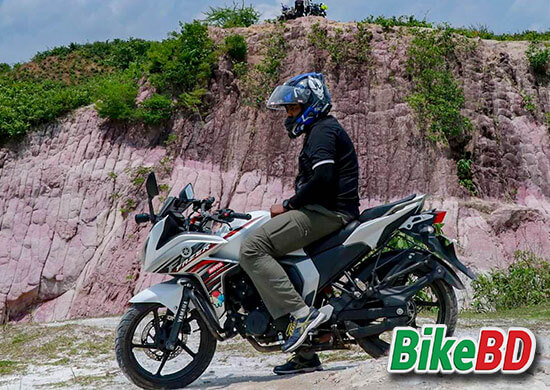 1. What is the gear shift pattern of YAMAHA FAZER FI V2?

Ans. YAMAHA FAZER FI V2  has a 5-speed manual transmission with wet multiplate clutch which is arranged in a return pattern and operated by a toe shifter. The bike’s gear ratios are a little bit tweaked for better street performance. However, the pattern is: 1-N-2-3-4-5.

2. What is the mileage of YAMAHA FAZER FI V2?

Ans. There are no company-claimed mileage of YAMAHA FAZER FI V2. We expect the bike to give around 38-42 kmpL in Dhaka city and more on others.

Ans. The YAMAHA FAZER FI V2 is meant to be ridden in the highways for the highway performance is amazing. The bike is extremely well-balanced and all. Almost the windblasts at highway are going to get cut by the semi-fairing. So, it is very much possible to ride the FAZER FI v2 in the highways. That said, if you need the same performance and yet want those to be in a more city-friendly manner, YAMAHA FZ-S FI V2 is built precisely for serving that purpose.

4.What does a Yamaha Fazer weight?