The Honda Cb Shine is a 125 CC premium city commuter bike that has been in the market for quite some time and been very successful since its launch. Now Honda has made some changes to meet the market demand and maintain its legacy, now it is called the Honda CB Shine (Source). So now let’s see how it shines its legacy.

Design: For a 125cc premium commuter motorcycle the design of the bike plays a very important role. The CB Shine shines there. The bike looks very sophisticated as everything in the bike is well proportioned and perfectly placed. The new stylish graphics on the integrated cowl and visor looks very attractive and dynamic.

The front mudguard and the well-designed headlamp add to that look. Honda CB Shine comes with a black-colored rearview mirror which looks modern in terms of its rivals. The paint quality on the bike has given the premium look that it needs. The engine, alloy wheels, and silencer pipe are colored black which gives the bike a more premium and cool look too.

The newly designed graphics on the tank and the sides panel looks modern and the 3D emblem of Honda logo on the tank has added to its premium look.   The seat looks of high quality, well-cushioned and spacious.

The sporty body-colored grab rail looks nice. The clear lens turn signal lights are flexible and the tail lamp is newly designed. The rear fender is very long which does a great job guarding the tires against spilling mud everywhere and also features a light reflector on it.  The bike is available in only Red and Black variants in Bangladesh.

Engine:  The new Honda CB Shine has a newly designed engine to obtain better mileage than before. It is a new 124.7 CC, single-cylinder, 4-Stroke, 2-Valve, overhead cams, Air-cooled, single spark engine with new HET or Honda Eco Technology. The HET by the way is Honda’s new technical term for better fuel-efficient engines that have been developed by Honda Motorcycle and Scooter India, Private Limited.

The engine has a 52.4mm bore and 57.8mm stroke resulting in 124.7 CC of cylinder displacement. The engine has a 9.2:1 compression ratio that makes the engine very durable in terms of Fuel quality in Bangladesh. The engine is fitted with a Viscous type paper filter for better and healthy breathing.

With all these, the engine produces 10.57 BHP of peak power at 7500 RPM and 10.30 NM of maximum torque at 5500 RPM. So the torque and power is available in the lower RPM range hence easily accessible which makes the bike go faster than before.

Transmission, Clutch and Final drive train:  The transmission used in the bike is a 4 speed super smooth transmission and all the gears are in up configuration.  The bike has a light wet multi-plate Clutch and the final drive is a chain.

Breaks:  The Honda CB Shine comes with a 130 mm drum brake as standard and a 240mm disk brake with 2 piston calipers in the front as an option and a 130mm drum brake at the rear.

Suspension:  The Honda CB Shine is equipped with hydraulic telescopic forks at the front and spring-loaded shocks with a hydraulic damper at the rear. This setup is very common and nothing special. As a premium city, commuter consumers will demand something special and more comfortable.

Chassis & Dimensions:  Honda used a Diamond type frame for the foundation of the CB Shine, which should be enough for a 125 CC bike. The Honda CB Shine has an overall length of 2012 mm, a width of 762 mm, a height of 1090 mm, ground clearance of 157 mm and a wheelbase of 1266 mm. The wet weight (with tool kit & 90% of fuel) of the bike is 123 Kg. This means that the bike has an average footprint in terms of dimensions in its competition.

Comfort and handling:  The Honda CB Shine is quite comfortable because of that full size, wide, spacious and well-cushioned seat, no doubt on that. But considering its rivals the bike should offer more comfort for attracting the customers. The rear suspension is the first letdown in the competition.

The handling should be easy in this bike regarding its dimensions and weight.  The handlebar is placed lower and the handlebar has some weight to it which gives away the vibration and helps the rider to have a firm palm grip. The bike seems unstable in the corners as lower ground clearance. The tires provide a good grip on the road. The bike is stable on the highway but the suspension desperately needs an upgrade.

Performance:  The Honda CB Shine is a silent performer. It does 0 to 60 kmph in 6 sec which is very impassive regarding a 125 CC city commuter bike. The CB Shine has a crispy throttle response and the bike performs very well in the comfortable mid RPM range.

If pushed hard it goes out of breath. Hence the Top goes limited to around 100 Kmph but within this range, it performs outstanding. The fuel efficiency is on the mark too. The bike gives a mileage of 55-65 KMPL depending on riding style.

Conclusion: The Honda CB Shine actually shines in the 125 CC premium city commuter segment. Apart from the suspension, switch gears and instrument console there is hardly anything that can be criticized. The engine is a great performer. So the bike is a very nice option for those who want sophistication on their ride. 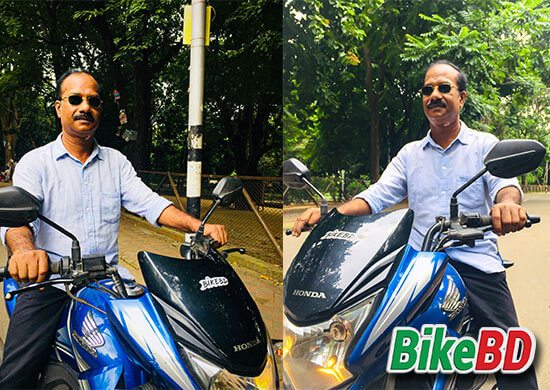 1. What is the bike type of Honda Cb Shine?

2. What is the mileage of Honda Cb Shine?

3. What is the top speed of Honda Cb Shine?