RUNNER is one of the main motorcycle production corporations in Bangladesh which started their journey proper here for the reason that prolonged. Even though, at the start, the products were outnumbered in the market and people did not purchase them. However, each day, they have improved their products and now, due to the most reasonable Price, their demand in Bangladesh is heavy. Let's check out all runner bike price in bangladesh here.

There are specific training of motorbike of Runner are presently available within the market of us of a. Even though the products of Runner are artificial in Bangladesh, most components of the motorcycles used to come back again from china. So, it's far regularly seemed to be a china product locally. However, they have got sports activities, modern-day and scooters. All three kinds are to be had currently where the maximum demanded type is a famous commuter.

Runner Motorcycles is the market leader in the sub 100CC market for two-wheelers with models ranging from 80CC and 165CC, which meet the needs of all demographics. It was the first to introduce retail financing to the market for two-wheelers and helped Bangladeshi customers to purchase their dream bikes through a low-cost EMI scheme. Alongside the retail finance, Runner Motorcycles has created an industry standard with its amazing after-sales service system across the nation. More than 200 service centers are open across the nation.

The company, which first began in the export of two-wheelers in 2017 to Nepal and Bhutan is the sole two-wheeler manufacturer in Bangladesh that has brought this level of pride to the nation. Furthermore, Runner Motorcycle is the only brand in Bangladesh that has been authorized to make motorcycles up to 500CC. They have successfully produced as well as exported their product dubbed Hawk 200, which is 200CC in size.

In addition to producing its own brand and products, the company is simultaneously producing American label UM and is also the official distributor of Italian top two-wheeler brands- Vespa as well as Aprilia. In addition, the company launched an additional premium motorcycle brand KTM (an Austrian flagship) that offers a premium transportation experience for Bangladeshi customers.

Runner Cheeta is one of the most offered bikes from the organization that's 100cc bikes. The specialty of the product is the maximum elements of the bike are made in Bangladesh and so, it's far surely local product. Besides, the decision of Cheeta is written with Bangla on his body as nicely. There are many hundred cc bikes to be had within the Country.

However, nobody can get it at fewer prices than Cheeta. However, there also are installments centers that are delivered from the corporation. Runner Cheeta is considered one of the popular mileage and general kind bikes of local logo Runner. This low-price motorcycle can meet the needs of the commonplace guy.

Although the bike is debatable, it has no longer been able to achieve an awful lot of popularity in Bangladesh for various boundaries. A little lightweight bike is good for City Riding however it is not as precise as the Highway. But due to lower prices, it&#39;s far becoming greater appropriate to ordinary human beings. The entire specification of Runner Cheeta is given underneath.

Runner Cheeta is a stylish elegant bike that has a long at ease seating position. The gasoline tank is a little small however fashionable which has a net design for each facet of the tank. There is kit storage simply underneath the tank; it really is black-colored. The pillion grab rail is lengthy that may deliver greater small baggage of riders. There is not any engine defense that could be a piece awkward. The all-new black-colored alloy wheels are slight and the same antique headlamp is properly ideal with the motorbike.

The engine of the Runner Cheeta is ideal and solid with a 95.75 cc displacement. The max power of the engine is 5.2 kW @ 8000 rpm and the max torque is 6.5 nm @ 6500 rpm. However, the top velocity of the motorbike is horrific. It's most velocity is 70 kilometers in line with hour, slightly less than modern-day motorcycles.

According to the business enterprise, it can't provide greater than 70 km regular width according to our top velocity but the engine can serve nicely. The mileage of the motorcycle is extraordinary which would be extra than fifty-five km. It has an air-cooled engine, unmarried cylinder and four-stroke wherein petrol is higher fuel for the engine. Each electric and kick-starting gadget is brought to the motorbike.

The motorcycle Cheeta is a little smaller than the ordinary famous commuter; it is 1960 mm lengthy, 770 mm extensive, and 1250 mm high. The wheelbase is likewise now not massive, that is 1220 mm and the ground clearance is 150 mm. The gasoline tank has the functionality to include 12 liters of fuel and the kerb weight of the motorcycle is 96.2 kg. The weight of the motorbike is quite low, however, it can handle easily.

The suspensions of the motorbike Runner Cheeta are almost exact but now not great. It might offer quite a comfort that is enough for a single rider. However, in the case of rural roads, its issuer might no longer be fantastic. The front suspension is telescopic and the rear suspension is twin shocks. The brakes of the device are correct and enough to manipulate the rate of the motorcycle. Each is a drum brake wherein the corporation should provide at least a front disc brake.

and for an elegant bike, it is too exceptional. The average mileage of the motorcycle is 55 km.

Most amazingly, the digital speedometer of the bike is introduced to the tool console where the tachometer is analog. Except, there are equipment display, fuel gauge and clock are also introduced.

Simple colors Red and Green with Black of Runner Cheeta are available in Bangladesh. 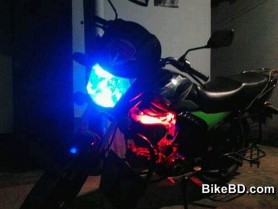 1. What is the mileage of the Runner Cheeta?

Answer: The Runner Cheeta has a tentative mileage of around 60kmpl.

2. Where is the Runner Cheeta made?

Answer: The Runner Cheeta is made in Bangladesh by the Bangladeshi company Runner.

3. What kind of bike is the Runner Cheeta?

Answer: The Runner Cheeta is a commuting bike.