If you ask any regular person on the road to name a Chinese bike, the first name they would say is the “RKS”. They may not know the cubic-capacity of the bike, they may not know the brand, but they’ll know it’s an “RKS”. That is how influencing the Keeway RKS series has been. People around the country know this motorcycle. And some contribution to this recognition is of the Keeway RKS 100.

Similar to most Keeway bikes, the Keeway RKS 100 was also designed by Benelli. The bike was designed with inspirations from the Benelli BN600. The design gives you a dignified feel. This bike was designed to look cool and orthodox at the same time. The graphics give you a feel of coolness in the owner and the structure tells you that the owner is serious and dedicated. The bike is a mechanical phenomenon.

The Keeway RKS 100 has a tank size of 16 liters. A tank that big is quite suitable for long rides out of town. Most bikes generally have a tank of 12 liters, which makes it rather difficult to travel long distances. These few extra liters are very useful for highway rides.

The Keeway RKS 100 comes in three colors. They are:

The Keeway RKS 100 is a short bike. The bike has a saddle height of only 760mm. For riders of height 5’2”, the bike will be considerably easy to control. The bike also has a thin body, which makes it rather easy to latch on to while riding.

The height, length, width, and weight of the Keeway RKS 100 are 1050mm, 2040mm, 760mm, and 125kg. The bike is substantially heavier than the typical 100cc bike, and that might be a bit inconvenient in regular commuting for a beginner. The bike is smaller than most bikes as well, it has a wheelbase of only 1260mm. A small and heavy bike does bring the question of balance in the equation.

The Keeway RKS 100 has a regular wet multi-plate clutch system. The bike has a 4-speed gearbox, which is a disadvantage, considering a 5-speed gearbox would have been more suitable for the bike.

The Keeway RKS 100 comes with a disc-drum setup. The front brake is a disc brake, while the rear is a drum brake. The front brake is a regular disc brake and may become the primary brake of many veteran riders. The rear brakes being drum, do bring the question of reliability, but since it is a 100cc bike, we can let that slide.

The Keeway RKS 100 comes with alloy wheels. The front and the rear are fitted with 90/90 and 110/80 section tires respectively. The tires are quite thin, but they are ample enough for a nimble bike with a low power figure.

Competitions:
The Keeway RKS 100 has quite a lot of competition in its segment.

In easy words, it can be said that the Keeway RKS 100 has outdone itself and puts up good competition against many of its rivals. The Keeway RKS 100 is a deserving bike and is reliable according to its specifications. 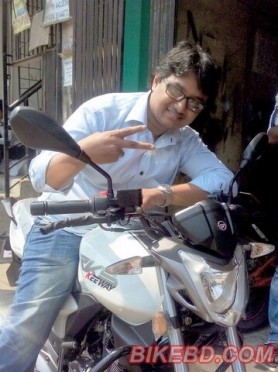 1. Where are Keeway bikes made in?

Ans- Keeway bikes are made in China

2. Are Keeway and Benelli the Same brand?

Ans- Keeway and Benelli both are owned by the same company, thus they share many technologies.

3. Who is the distributor of Keeway in Bangladesh?

Ans- Aftab Automobiles Ltd. are the distributor of Keeway and Benelli motorcycles in Bangladesh

4. What are the latest Keeway bikes?

Ans- Keeway RKR 165 is the latest Keeway motorcycle in Bangladesh