TVS Auto is a sister concern of Rangs Group and is also a renowned name in the motor bike industry in Bangladesh. TVS motors declared its new commuter TVS Jive in Auto Expo 2010 in New Delhi and soon it made its debut in Bangladesh as well. The bike is considered as the foremost auto clutch bike till now. It is a very unique product made with the intention of making riding in stop-go traffic easy. Let’ see TVS Jive Review. 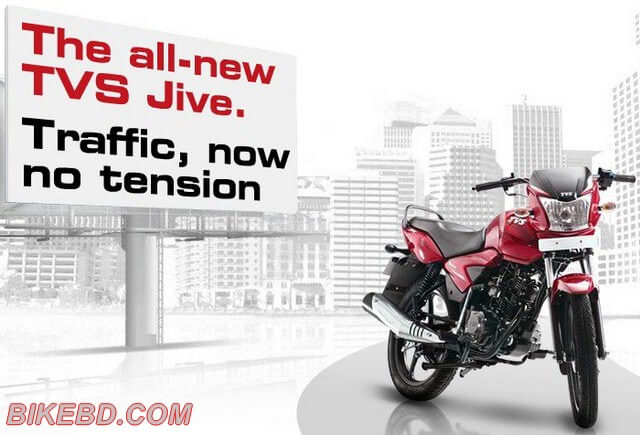 TVS Jive is equipped with 110cc engine, which includes a ground-breaking T-Matic technology along with rotating gear equipment and a self regulating clutch. The bike comes with a four speed engine which delivers a solid four stroke performance with a maximum power of 8.1 bhp @ 7500 rpm and a maximum torque of 8.1 Nm @ 5500 rpm. Furthermore, it also comes with a single cylinder and air- cooled engine.

The bike got a chain drive transmission of four manual gear boxes with an automated clutch along with an ignition system of digital IDI. Moreover, this bike got a starting system of kick and electric along with a bore x stroke ratio of 53:49 mm. The bike claims a fuel economy figure of 62kmpl and a battery power of 12V.

Moving on, then this two- wheeler is full of amazing features. For example, one of the main characteristic of the bike is the absence of clutch lever, offering the rider a free hand gear shifting riding experience. Therefore, this bike can be ridden by almost anyone who has a sense of balance as there is no need for manual clutch-gear   coordination while shifting. Another unique feature of TVS Jive is its anti-stall mechanism which makes smooth riding possible at low speeds even in high gears, without the engine shutting off.

This won’t be possible if you riding a bike with the regular clutch system. Besides, the bike got a downward rotary gear system which enables the rider to reach neutral directly from the top gear. However, it is not necessary that the bike has to be in neutral while starting. The bike can be started in any gear and is fitted with an electric start for the rider’s convenience.

about the looks of the bike, then this two-wheeler will definitely win your heart with five-spoke alloy wheels, stylish clear lens halogen headlamp, with a battery power of 12V, 35/35W, coordinated in a fairing that gives the a simple yet purposeful look. The rear tail lamp, dual stitch seats and a fat fuel lid which can hold up to 15 liters of petrol also add up to the quotient of the bike. 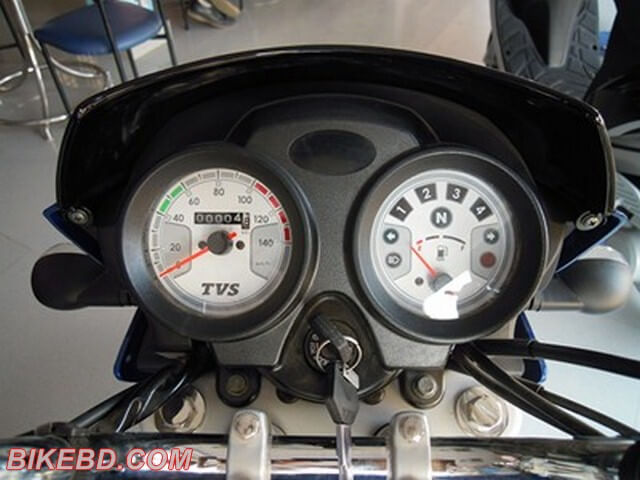 Moreover, it is also the first bike in the country to have an under seat storage space, large enough to hold a bottle, vehicle documents and even a small umbrella. The bike also consists of comfortable contoured seat for you and your pillion, giving your knees recess for superior comfort while riding the bike.  The analogue speedometer, gear indicator and fuel gauge got clear display panel to tell you what gear you are on.

Moving on to the tires and braking system of the bike. This bike comes with five spoke alloy wheels of a size of 17 inches along with a wheel base of 1260 mm. It got a front tire of size 2.75×17 and a rear tire of size 3.00×17. Other than that, this two-wheeler also consists of drum braking system with the size of 130 mm on the front and 110 mm on the rear. 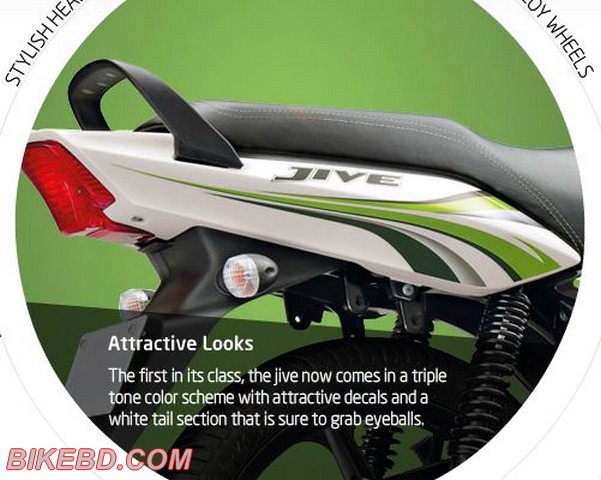 Last, but not the least, the dimensions of the bike. Jive 110 comes with a length of 700 mm, width of 1975 mm and height of 1060 mm. The bike got a dead weight of 115 kg along with a ground clearance of 165 mm.  The light weight of the bike makes it convenient to handle. Alloy wheels complement the bikes even further and the wheelbase of 1260 mm simply just makes the cornering and maneuvering, effortless.

Well, the real handling test of a is when you are pushing it through some corners, and TVS Jive being lighter in weight, got its own advantage. The bike fights back with its rider friendly ergonomics and comfortable ride. The wide handlebar coupled with the upright seating position offer great maneuvering capabilities in city traffic. Which as we all know, is very common in Bangladesh. So in short the Jive 110 turns out to be more comfortable for both the rider and the pillion, thanks to a more spacious saddle and a better ride quality. 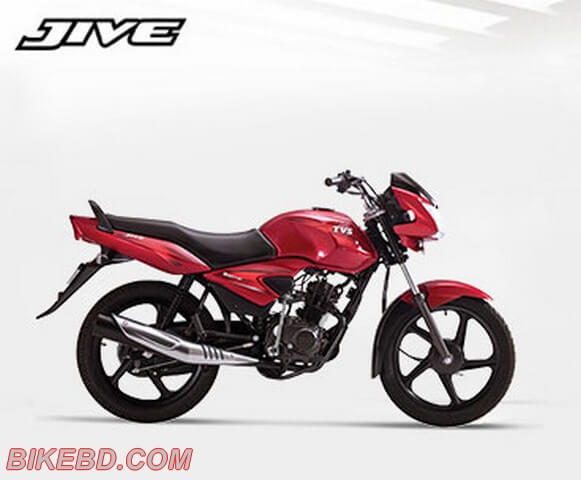 Now the bike comes in four different colors; they are- red, blue, black-red and black-gold. All in all, I think the all new TVS jive 110 is an all rounder with many amazing specs and features. Adding up to the quotient is definitely the looks of the bike along with its price tag of BDT 1,34,500/=. Though this bike already raised a lot of demand for itself in India, we are yet to see how well it does to raise its demand in Bangladesh. Well, let’s just hope for the best!  (Fingers crossed).