The Basic SYM wolf T1 150 is a renowned bike in the Taiwanese market. The first time we at BikeBD heard about this gem of  SYM Wolf T1 150 we were a bit skeptical as we did not know what to think about a Taiwanese bike. For as a general principle it is assumed that any thing made in Taiwan is only a fabricated material from china. 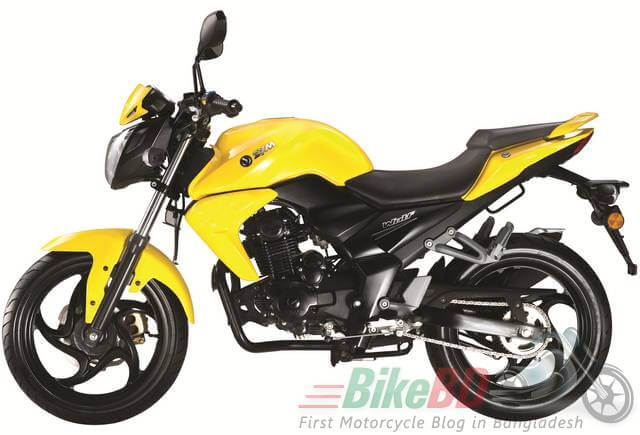 So we were not so much enthusiastic to do a SYM Wolf T1 150 review. But after our experts personally handled the bike and the chief reviewer took a ride on it we had to change our mind. This is a good and sturdy bike with a fashionable naked bike look. And also the bike gives any one riding it a good feel and a common place feeling.

After the matter of the looks got out of the way we let ourselves go down to brass tacks and all the gloves were out. We nearly dissected the bike to get a good feel of the bike and also know about the interior of the bike. Our Team opened the bike engine and also opened the tires to put them on other bikes to get the feel of the road and other matters. 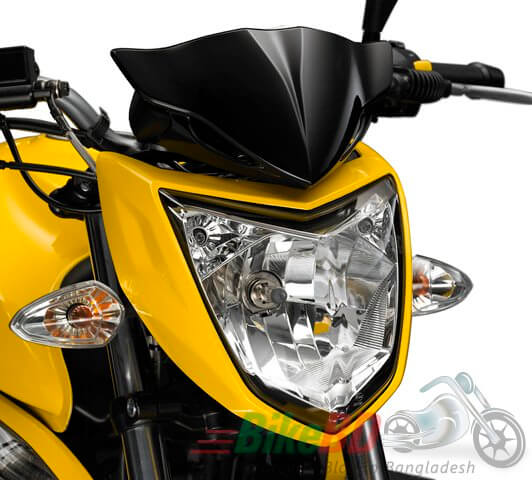 There is a saying that first impression is the best impression, in that case the bike is a winner hands down. It may be a 150 cc bike but it also has a look of the 250cc class. The body is later we found that is one of basic 250 cc model. The Naked look is also currently in on the market and thus allows for a fashionable riding bike. But what we really were looking for was that of a powerful bike and the first starting is really something else, the power of this bike is amazing.

This is a bike that has a air cooled four stroke SOFC engine, delivering a whooping  14.8 bhp with a staggering 9000rpm.And the max torque is somewhere between 7500/8000 rmp. Has a height of 1.65 meters and  the length of 2.2 meters. Has a dry weight of 162 kg, that is a tad bit of weighty for a general bike. Has fuel capacity of 16 liters and moreover the matter is that it is a generally big bike. This  has a electric start and no kick start option.

This has a normal SOFC bike engine and thus is a powerful engine which has a little late throttle response . Other bikes in the 150cc market have a better than this baby, though what it lacks in throttle response it makes up in power as it has a low torque option. The 149.00 cc engine spews out nearly 15 horse powers and it goes 0-60 in 5 seconds.

The Engine being a SOFC engine has a very good feel. The main matter that came to our attention at the time that we saw  the bike that it had a very low torque to speed ratio. Those who don’t know what torque is , simply it is the matter that allows the engines crank shaft to move from one level of power to another.

Now the matter is the T1 Wolf has a power to torque ratio of starting at only 3000 rpm(Rotation per Minute) on the other hand the general torque to power ratio is one that of in Indian bikes are that of 5000 RPM and this makes the T1 Wolf unique as the low power to torque ratio allows for a much faster shift in gears and a much faster pickup than that of the Indian bikes. 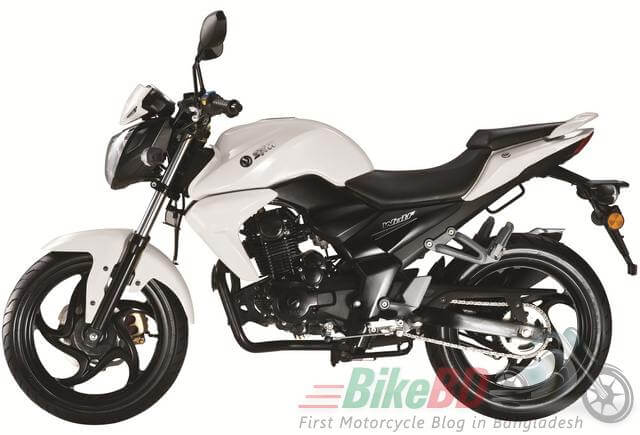 Though the bike has a lot of advantages and other that caught our eye was that the bike had a very weighty crankshaft, nearly 18 kg’s which is in comparison 5 kg’s more than any Indian 150 cc bike. This may be both a good and bad thing in to-gather, as a heavy crank shaft takes more power to turn and on the other hand the crank shaft will definitely allow for a longer service period and better service in the long run.

Also the fuel holding position is a bit surprising is that though this is the only bike in the 150 cc class to have a fuel pump, without EFI Engine .

This allows the bike to score some major brownie points and that will be duly noted as the matter is overshadowed by the absence of a fuel reserve and thus allows for a risk of running out of fuel in mid road. This bike has no reserve tank.

The design of the bike is very ergonomic and does not need a very vivid description. It is a naked bike and thus allows for a keeping up with the current market fad and projects a fashionable look on the bikes exterior. The  head light is the one that needs to be watched out, 55-60 watt  though as because the headlight has an imprinted logo on the bulb so when the bike projects the head light it actually projects the bikes logo that is the logo of the wolf, which is a new in Bangladesh.

The bike also has cast metal accessories such as foot pedal or the back guard which makes the bike extremely heavy thus adding a lot more stability while riding over uneven ground. More over the back portion where the license plate is tagged is made of extremely resilient plastic raisin that makes it nearly unbreakable so allowing for a un-wanting positive side that there is no general accidental breaking of the back portion. 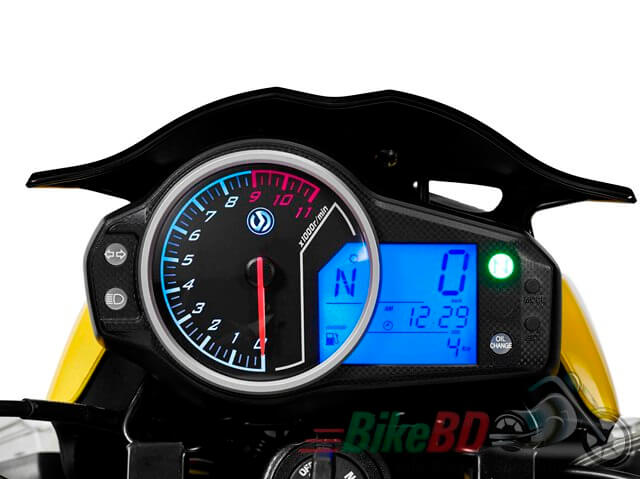 The accessories of the bike are in a really good position, this bike has a odometer that has nearly all the necessary points of the bike covered as the bike allows for the recording of the top speed and also shows a great many factors such as the bikes engine temperature and other whatnots. The Controls look like a cb-100 and moreover there are color options so you can make your choice from a differing range of colors.

This bike is a cheap sports bike lookalike. This one has a good riding feel for the first 10 km’s but after that long time joyride the sitting arrangement seems kind of awkward as it is in the spirit of racing bike and the sitting arrangement is done to keep up that style so in a long range ride the bike has an impromptu sitting and comfort zone. The bikes tire’s are known as CST tires which are not actually good for our roads.

Though the alloy reams are made of cast metals and the aerodynamic design causes the bike  to move more freely and this is mainly a major advantage. The Suspension of the bike is a really good one, it has a telescopic front suspension with gas monofilament shock absorbers and the back has a periscopic suspension with a strong spring material embedded and thus creating for a very hard back wheel response time that causes the bike’s shock response time to be very low making the back suspension a dime for the money, meaning a very unique ride. 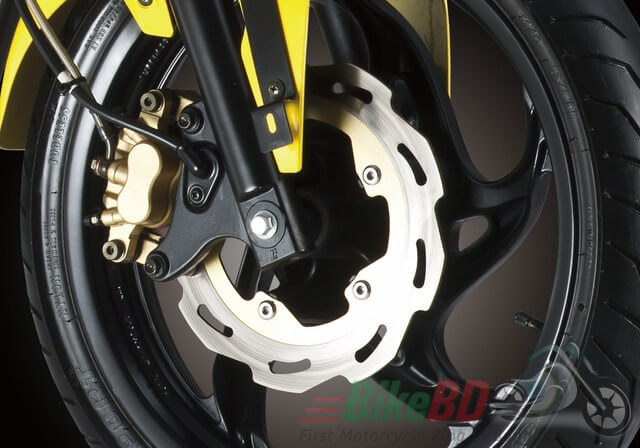 Another plus point of the bike is the perforated edge disk brakes that allow for cooling to take place while the front disk brakes are working, as the edges allow for the removal of sands from the plates in the disk brakes and also allowing for a much easier and superior brakes. 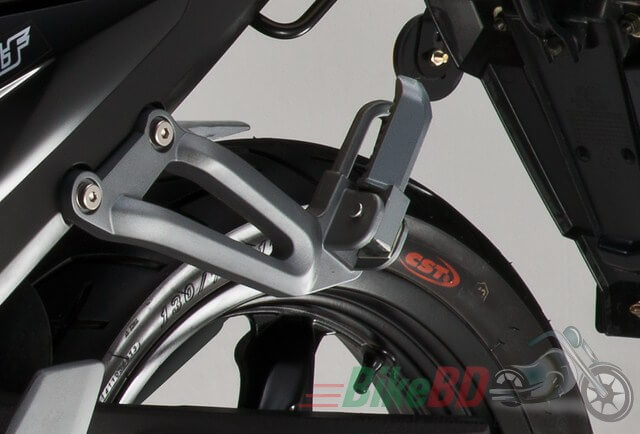 So the Ultimate verdict is that the bike is a common place bike that has tried to take a foot hold in our local market but has ultimately was not able to make a splash in the market though it has many unique features. It would be a n injustice to the bike that such a thing of beauty has been ignored on so many different levels and thus has not been able to make a splash in the market, and though this may not be due to the bikes quality and more to the fault of the company importing and marketing it.

Another thing to be duly noted by the reader that as this is a small company who has imported on a small basis, they have a very small service providing capability and if in any case the bike faults and needs repair, the bikes parts are only available on the shop where it is sold and nowhere else in the market. 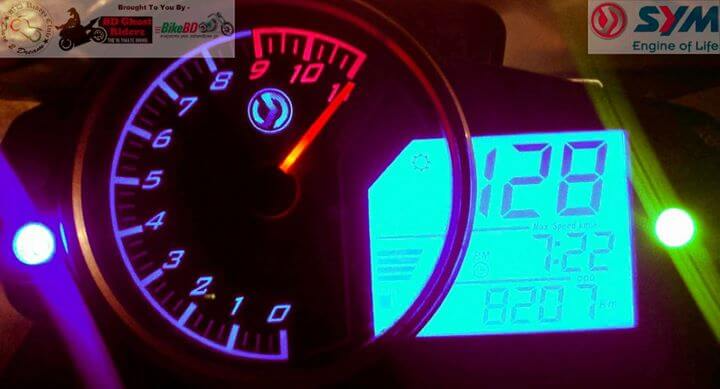 Fuel efficiency good in comparison with other 150 cc available motorcycles in Bangladesh. In city it deliver 32-35 KMPL & Highway 37+. We didn't get any open road to test the top speed but we score 128 KMPH at airport road. 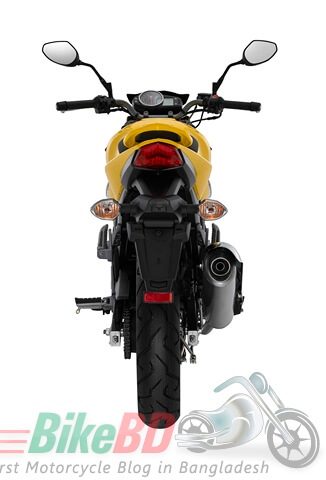 Why Should You Buy?

2. Best naked looked bike Among all the available naked motorcycle in Bangladesh.

4. Price is reasonable according to the product quality.

Why Should Not You Buy?

1. Tires have too bad grip which not work good at emergency break.

3. Only the showroom have spare parts, spare parts not available in market.

Hope this SYM Wolf T1 150 review will help you to know about this bike.