What is Motorcycle Break In Period? Itâ€™s a time when engine is new specially first few hundreds or thousands kilometer (0-1000),where engine parts like piston rings ,valves and cylinder bore remain rough which needs to be worn properly ,so on that particular time owner needs to follow cautions to smoother the rough internal parts of the engine so that engine can give proper mileage and it can last long and give proper power output. 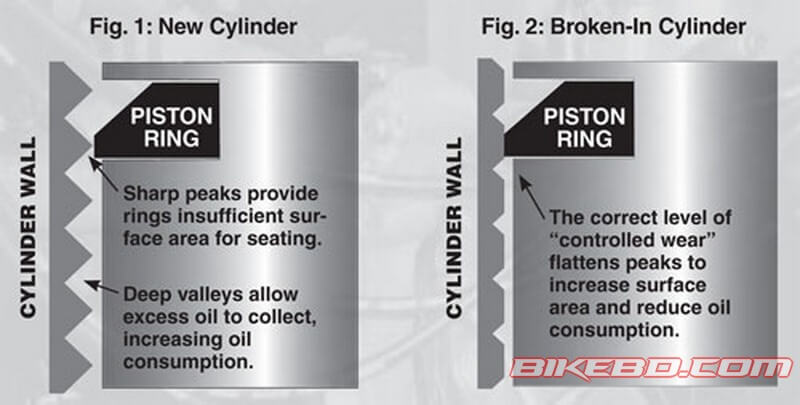 As we all remain very excited after buying a new bike and in BD bike is much expensive than our neighboring countries, So we have to be patient to pass its break in period which is needed for better fuel efficiency and longevity of engine. We should not be emotional or over excited if we become so we might cause some serious damage to our beloved bike engine.

What To Do In Motorcycle Break In Period?

As In BD most of the popular bikes are from India like ( Bajaj Pulsar 150, TVS Apache Rtr, Hero Honda CBZ, Yamaha Fzs, Honda Trigger) so I will give some guidelines of engine break in which is followed by most of the Indian manufacturers .It might differ few kilometers from one another but trust me end result will be same you will get a fuel efficient trouble free durable powerful engine .

2. Do not start the engine the engine at high rev when you are under in break in period .

3. After starting the engine keep your engine in idle for at least one minute.

6. Try not to cruise on highway on that time .

9. After riding constantly 30 minutes or 30 kilometer stop and give your bike some rest so that engine can cool down .

10. Donâ€™t give hard acceleration when you are under in engine break in time.

11. Use only mineral oil (not fully synthetic) when you change engine oil under 1000 km .

As I owned a TVS Apache RTR very recently and I have been following these steps and I havenâ€™t found any issue what so ever to my 711 kilometer experience and bike is getting smoother everyday its passing more kilometers, So any rider with any displacement of bikes (100,150,or higher) will be benefited by following Motorcycle Break In Period steps. Happy biking and ride safe .