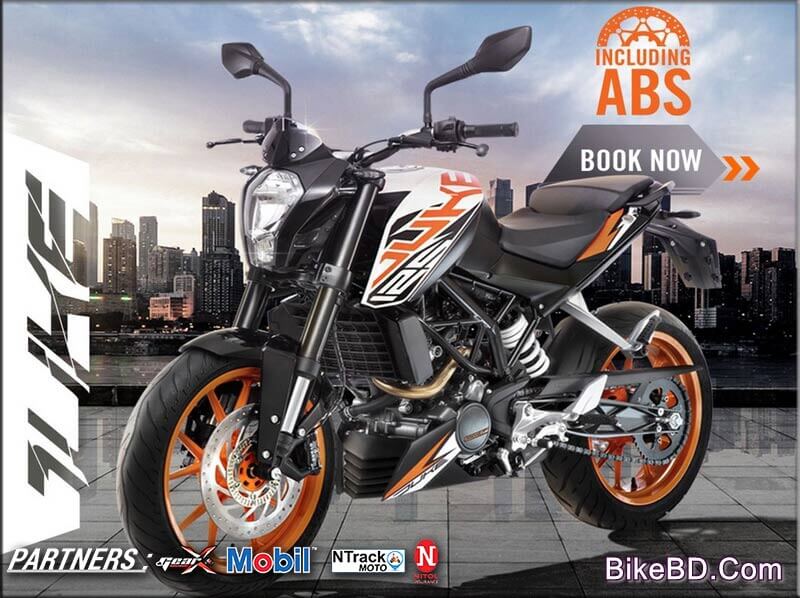 The KTM 125 Duke Indian Version is the all-new release from KTM for India and this sub-continent. Hence, the motorcycle also available in Bangladesh through the grey-imports. The machine is designed differently than the European version of KTM 125 Duke. So, the overall looks are different in the new version.

The motorcycle developed targeting the enthusiasts of this South-Asian sub-continent. Hence the version carries the localized design, feature, and characteristics. It somewhat borrowed the looks and design of the older KTM 200 Duke that had been produced for this market. Hence, this machine is featured in the blend of Duke DNA and ensuring the economic belongings. 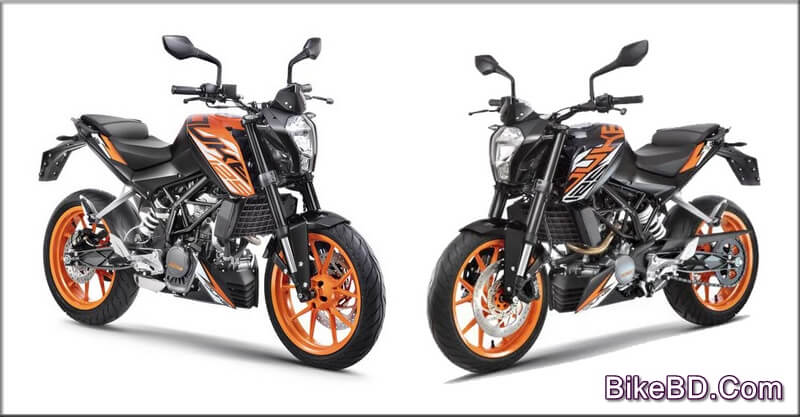 KTM 125 Duke Indian Version – Designed to Cope with the Trend

We mentioned as the new 125 Duke is borrowed the looks and design of the earlier model of KTM 200 Duke. That also was designed for this Asian region. Therefore, the core theme of the new machine is to cope with the local trend. So, this new machine featured with localized looks, design, and features including KTM craftsmanship.

At first, it’s a new machine with vertically narrowed compact headlamp assembly. The ODO is naked, which just mounted over the headlamp that has no cowling or even a tiny shield. Later, the fuel tank is shaped iconic that extended with the shrouds toward the front just similarly the 200 Duke.

Similarly, the seating also copied from the old model that is wider, flattened and sporty split. Only the pillion part looks different with its slim design. Hence, the rear end is naked and compact with double-horn grabrail, LED tail-lamp and bikini registration plate hanger.

Further, naked trellis-frame, reinforced swingarm, exposed rear suspension, underbelly cowling and exhaust all are just similar to the older bread. Even the plastic body panels are quite a clone, but the differences visible on color and sticker jobs. Hence, overall the new machine looks and design is trendy that already loved by the youngsters. 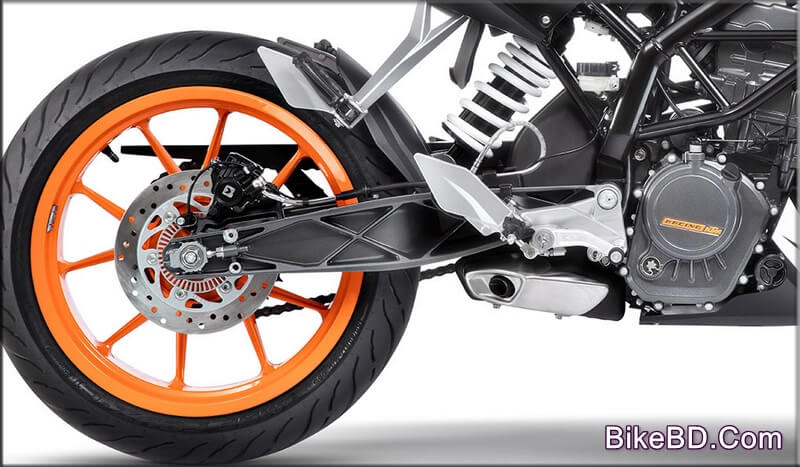 The new KTM 125 Duke Indian Version comes with quite the same frame, wheel, brake and suspension as does the European Version. Obviously, few dimensions and values here are different and those come with different tweaking and enhancements.

Whatsoever, the frame is a trellis frame that is naked and exposed. The frame is lightweight, rigid and characterized to ensure the mass centralization. The swingarm also a reinforced unit that linked with rear WP shock absorbers.

Coming to the suspension setup the front unit is 43mm USD telescopic-fork suspension and the rear unit is mono. Here most interesting thing is both setups can be tuned with an optional lowering kit. The feature is very helpful for the lower height riders as it minimizes the saddle height up to 25mm.

The wheels of the new machine come with 10-spoke alloy rims with wider tubeless tires. Here both the wheels featured with wider diameter hydraulic disk brakes. Further, the brakes are featured with hi-tech braking assembly that enhanced with Bosch single-channel ABS enhancements. 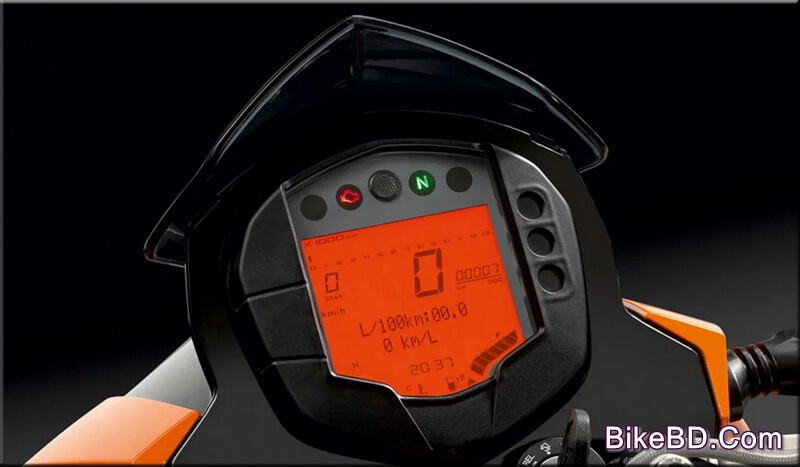 The KTM Duke series is the true street naked series that designed to rule the roads. The core of the mule to support the tough situations of the street and highways with its streetfighter features. Further, the series is dedicated to ensuring fun playing all over its performance level.

Hence, the machine is designed with upright ergonomics to support the streetfighter riding posture. So, the seating, riding and controlling arrangements all are upright with upright pipe handlebar and other control lever positions. Therefore, the riders have full control dealing the street situations and maximize fun playing.

The machine is 148kg weight with all of the fluid and liquids, where the dry weight is 141kg. So, comparing the 125cc low capacity motor the weight is quite high. But considering the overall compact design and mass centralization, it may not feel buzzy as KTM describes. 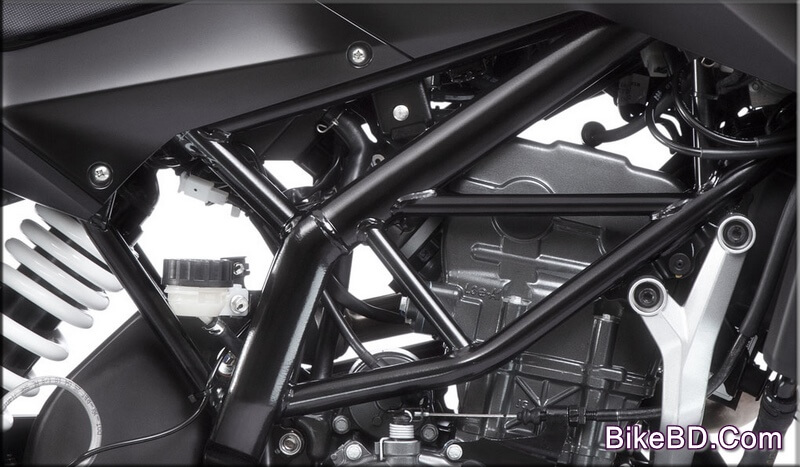 The new KTM 125 Duke Indian Version comes with precisely a 124.71cc single cylinder four-stroke engine. The engine is fuel injected and liquid-cooled engine that featured with four-valves and DOHC valvetrain.

Hence, that small displacement engine is oversquare and that produces vibration free horsepower.  According to the book it can produce 15HP of power and 12NM of torque with smoother power delivery and solid punch of torque. Further, the camshafts are ultra-hard and cams are reinforced with a carbon coating. Resulting the engine is ultra-reliable and long-lasting as KTM describes.

The engine is mated with 6-speed gearbox and equipped with electric start. Therefore, with compact engine design, close-ratio fuel injection mapping and smoother gear operation the machine can give nimble performance even riding hard in full throttle. Again, the fuel economy also ensured in a significant level as it’s an economic featured machine designed for Asia. 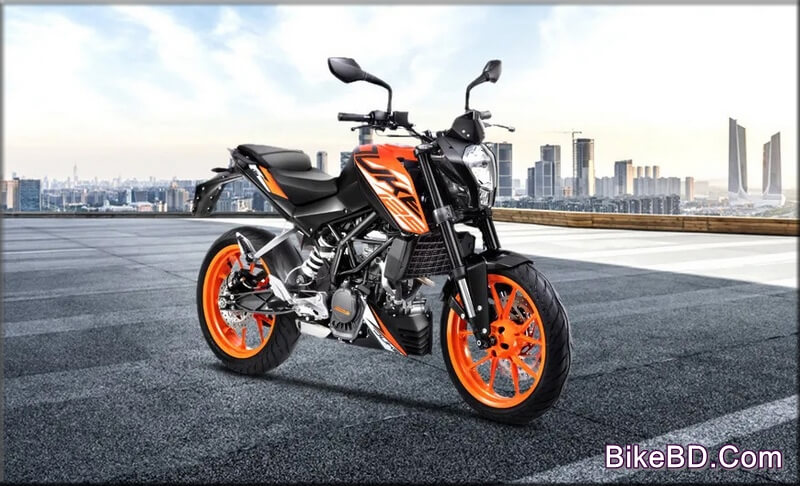 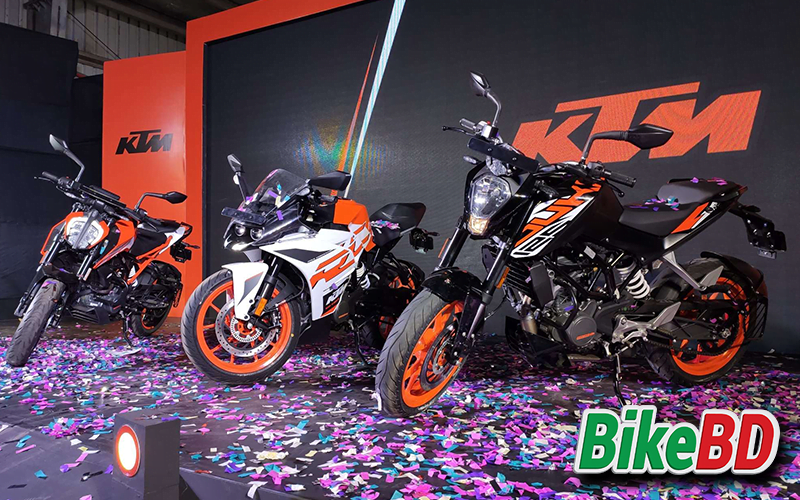 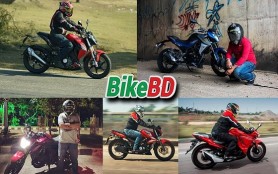