Keeway is one of the emerging motorcycle companies in Bangladesh. They gained their popularity with their RKS series in the commuting segments. Months back they launched an updated version of Keeway RKS150 after evaluating the bike for 2500 km both in city & on the highway we present you Team BikeBD Test Ride Review of Keeway RKS 150 CBS Review Sports: First CBS Motorcycle in Bangladesh. 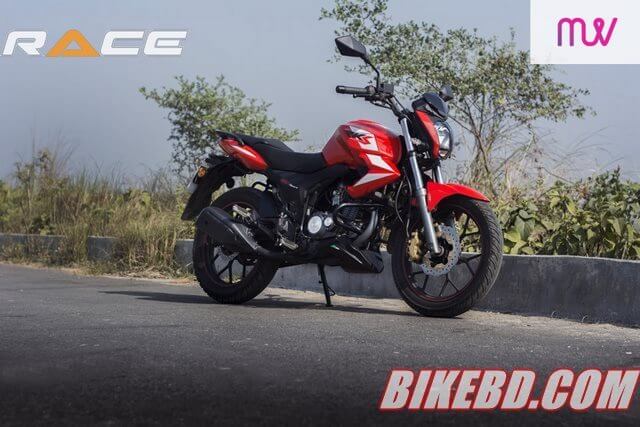 What is new in the Keeway RKS 150 CBS Review: CBS?  Before this bike was launch Keeway already had the older version of Keeway RKS150 which we reviewed at our website, so what is new in this model. Well here are the major changes in this new 2017 edition: 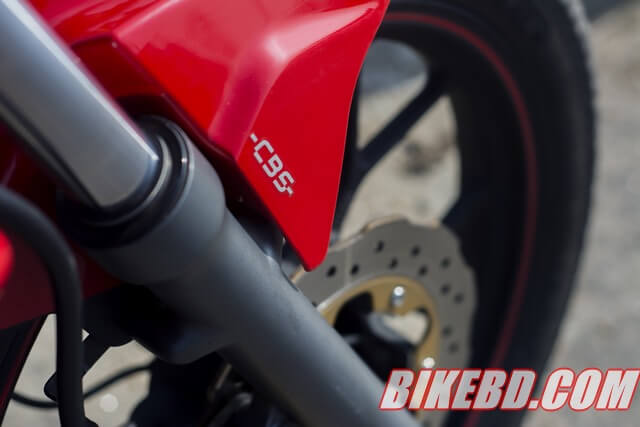 What is CBS?  The full form of CBS is Combined Braking System. You can find CBS in scooter but in motorcycle this is new for the Bangladeshi bikers. The system works by linking front & rear brakes on a motorcycle. CBS is one of the most efficient ways of braking system. In this system when the rider presses one of the brake levers the bike applies brake on both the tyres. The pressure of the brake is determined by proportional control valve. In the case of Keeway RKS150 CBS the foot brake is press then the braking force is applied on both the front & rear brakes. It reduces the braking distance. The system ensures equal braking force is distributed to the front & rear wheel at the same time to give it the perfect balance.  One thing people must know is that CBS & ABS are not the same thing, so don’t be confused. 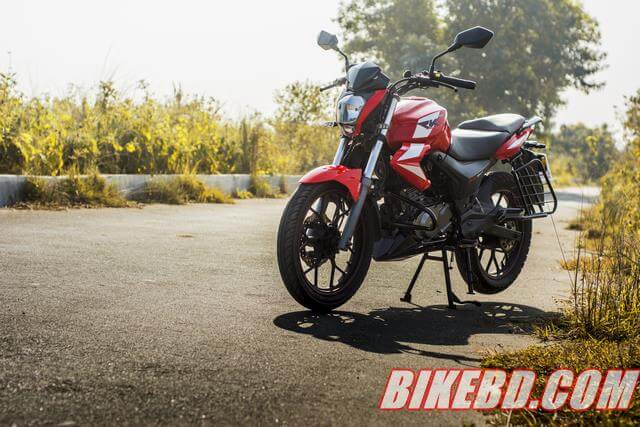 Keeway RKS 150 CBS Review - Features of the motorcycle  Other than those key changes the overall motorcycle is still the same. From the front you will know that the motorcycle has a look of KTM Duke 125. They did copied the styling by somewhat. The parking light is situated at the chin of the headlight. The bike has standard saree & leg guard & conventional switch gears. Meter console has an analog rev counter & a digital speedometer with speed indicator, gear change indicator, fuel gauge & other warning lights. The bike is equipped with both kick & self starting motor. 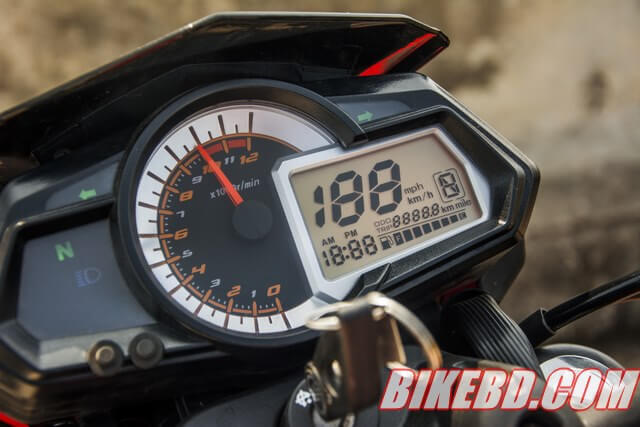 Seating position is upright like a commuting motorcycle. The handle bar & mirrors is very widely spread which make it difficult to ride through small gap in the traffic. There is rear grabrail for the pillion rider to seat comfortably. Split seat adds a new looks to the motorcycle. The fuel tank carries 16 litres of fuel & on its side there are air scoop to let cool air coming to the engine.  It comes with 120 section rear tyres which provides good grip on the corners.  The gear change lever has two positions so it will help not to ruin your shoe. The front suspensions are telescopic & travel 110 mm while the rear suspension is a mono shock. The full combination of brakes, tyres & suspensions provides good support both in city & on the highway. The front brake lever has a pressure adjustable lever by which you can adjust how much force you want to apply on the front brake. 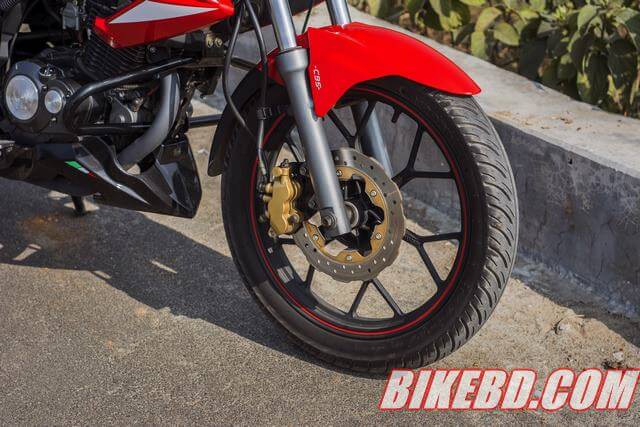 Keeway RKS 150 CBS Review - Engine & Transmission  With many added features on this motorcycle Keeway kept the engine the same as it was in the old version. The 150 cc air cooled single cylinder engine produces 14 BHP @ 9500 RPM & 12.8 NM of Torque @ 7500 RPM. The engine is still a carburetor unit & it has TLI ignition. I would have suggested some work on the noise of the engine as it isn’t the smoothes noise in the world. During our testing of 2500km the Top Speed we managed to find out was 115 km/h Mileage is something we are not totally happy as in the city we received 35 - 38 km/l & on the highway 42 - 45 km/l. 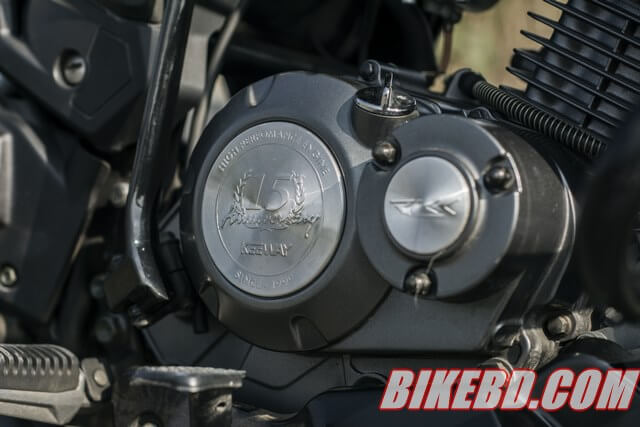 Keeway RKS 150 CBS Review - Riding Experience Just like the bike we tested two years back this new bike also has the wheel spin issue from the rear wheels due to the wrong setup of the clutch of the motorcycles. Gear lever up front stays a bit hard for the first few hundred kilometers until the first service of the motorcycle is done. In city this bike is good to ride. The longer wheelbase & good spread out handles helps to make good turning angles in the traffic. Issue comes with the spread out mirror which sometimes make this motorcycle difficult to go through small gap. 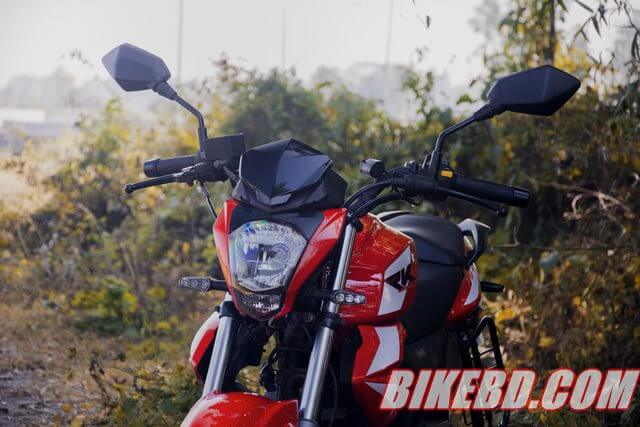 Biggest talking point about this motorcycle is the feedback from the CBS. For the first 500 km the feedback is slim but with time the feedback gets better. To get the best feedback from the brakes always make sure to have the proper tyre pressure in the tyres. Most of the time during the break in period I only used the foot brake which operated both the front & rear brakes.  Under braking the bike is stable but sometimes the rear of the bike does slide a bit & in heavy breaking the rear does lock up. The new bike is 6 kg heavier which you can feel in the acceleration of the motorcycle with CBS & tubeless tyres it all added weight but I am happy as they made the bike better. I won’t complain about it. For the extra weight the braking stability increases a bit but the top speed drops a bit. 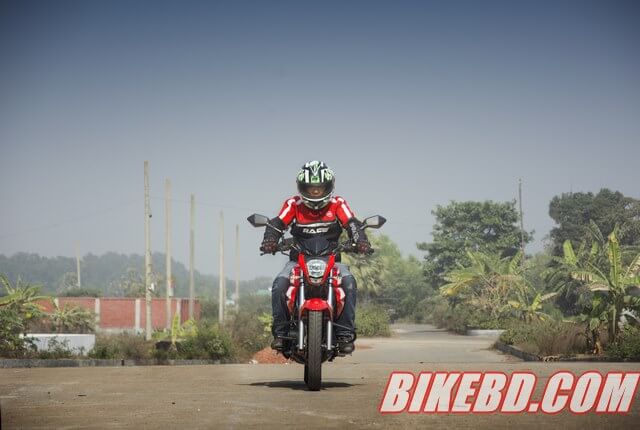 I think given the price range & the features this is a good motorcycle for city riding. Whether you are carrying a pillion or riding alone the brakes, suspensions & tyres provides good feedback for city riding. On the highway we check that when ridden alone of speed around 100-110 km/h the feedback from the brakes is good. It would have been better if the CBS brake distribution would have been a bit more forward. It is advice to be careful about CBS braking system on off roads at higher speed. Special care are needed to be taken while riding on sand. Headlight of the motorcycle is satisfactory for highway ride. As far physical pain is concern I felt nothing like that during our long distance ride. The handle bar is well spread apart for long distance ride. CBS braking of the motorcycle is good enough to give good feedback on the highway whether riding in the rain or on the dry. 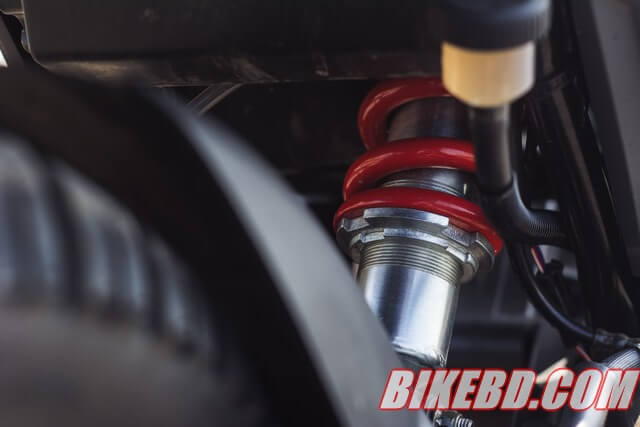 Problem with CBS braking comes with you apply foot break on the muddy road, off road or on sand sometimes the front wheel might lock up. This is an issue & if you find this then you area advice to go to the service centre to adjust the pressure of the braking force of your motorcycle. 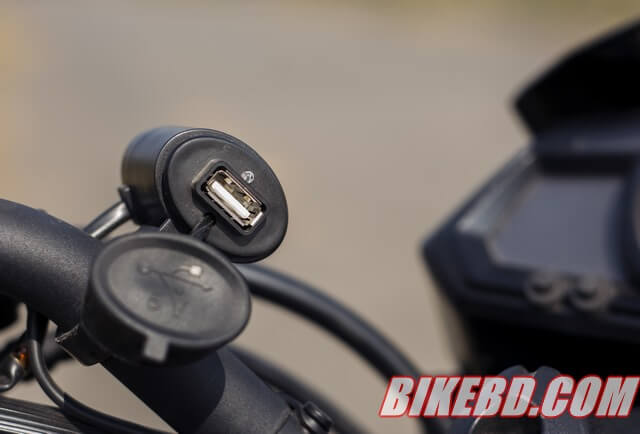 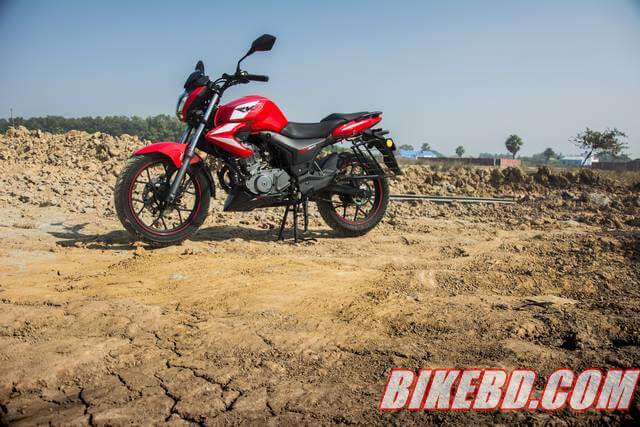 Final Verdict:  This is a commuting motorcycle which can be enjoy on the open highway. The bike is comfortable to ride & with newly added features they cost of the bike the price of the bike didn’t went up by that much comparing to the old model. I think this Keeway RKS 150 CBS Review help to know about the bike. We want to thank Race for being our accessories partner & MUV for being our Ride Sharing partner throughout the Test Ride Review.