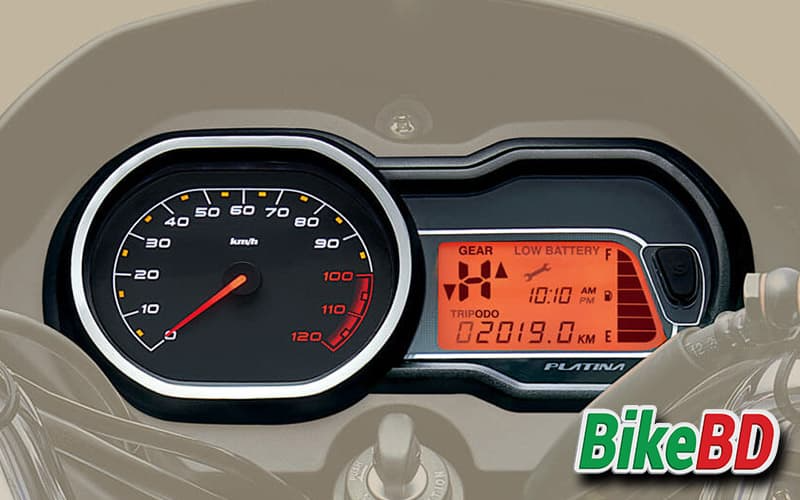 Bajaj Platina series is a popular commuter series in the Bangladeshi motorcycle market. Therefore commuting friendly Platina series has a vast demand in the commuter market. Further, these commuters are now satisfying this customer ranges with competitive features like tubeless tire and disc braking systems. Keeping the market demands justified the new Platina 110 H Disc Comfortec now comes with the latest technology and features that are hoped to meet customer satisfaction to the fullest.

The new Bajaj Platina 110 H comes with a bundle of new features than the older versions. First of all, it has a specialty in its gear system that featured the ability of soft-touch gear shifting. Further, the fuel economy also enhanced significantly. Sequentially it now featured with the extensive 5-Speed gear transmission system. And all the gears are profiled with down-shifting features.

In addition, the new version of Platina is now profiled with a new ODO console. It's a combo console including an analog speedometer and attractive digital display. The digital part of the console has the gear indicator, fuel gauge, watch, battery gauge, and ODO meter. Further, the gear indicator system is featured with an impressive gear guidance system. It indicates the rider whether he/she needs to shift geat up or down matching with the speed. Thus it assists the rider to ride with the proper gear.

Coming to the other features the new Platina comes with a quilted seat that matched its Comfortec badge. Hence this is one of the specialties of the bike that ensures comfort both for the rider and also to the pillions. Hence the rider and passenger can ride even for long hours comfortably and lesser bitter experiences on the nasty jerks. In addition, the new Platina is featured with 80/100-17 section front tire and 80/100-17 section rear tire including all alloy rims. Again it's braking also featured a 240mm disk in front and a 110mm drum at the rear.

Coming to the motor the better tuned 115.45cc engine of the Platina H Disc Comfortec is featured to produce the maximum power of 8.6PS  at 7,000RPM and the torque of 9.81NM at 5,000 RPM.  Hence that performance figure makes the sense of the bike to be powerful. Further, the advanced DTS-i engine, Anti-Skid braking system with CBS, tubeless tire, Nitrox suspension, 3D Platina logo on the body altogether makes the Platina 110 H Gear an attractive unit and making it comfortable to ride almost everywhere in Bangladeshi terrains.

Click To See All Bajaj Bike Price In Bangladesh 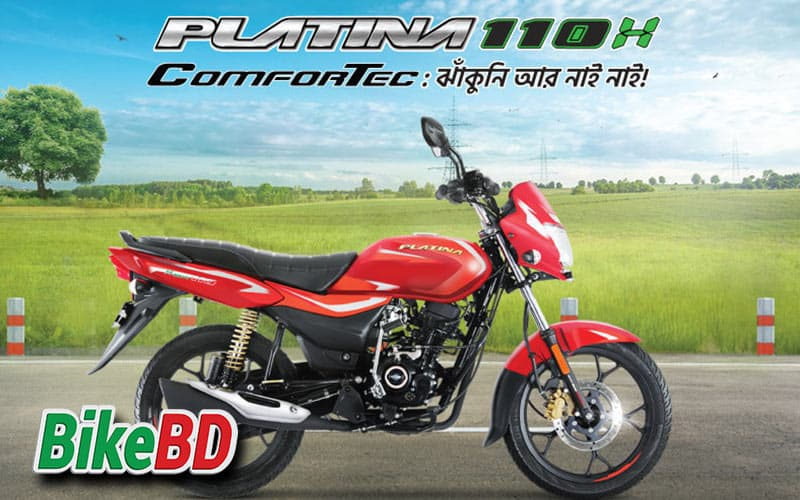 Hence, keeping in mind to favor the Bangladeshi commuter customer's Platina 110 H is priced at 1,10,900 BDT. From now the bike will be available in all the official showrooms of Bajaj.

If you want to see the first impression review of this bike, let us know in the comment box on our YouTube channel.