Introduction: YAMAHA. The Japanese automobile manufacturer’s motto “Revs Your Heart,” is in its truest form in the YZF R15 from the company in Bangladesh. If you are a Bangladeshi biker, or else, a biker from the subcontinent, you must know the meaning very well.

YAMAHA has recently updated their R15 bike once again from top to bottom. The 150cc segment bike has its own league in the market with, we can say a cult following.

The bike is now in its third avatar and called the YAMAHA YZF R15 Version 3.0. The “Monster Edition” comes with liveries that are derived from the MotoGP bike as the title sponsor of that bike is Monster Energy. Everything else is the same to the Indian edition. See pictures of Yamaha R15 v3 monster here.

History: YAMAHA YZF R15 was launched back in 2008 to meet the demands of the young enthusiast bikers. Since its inception, it has been a machine that gives the riders a full package of performance and reliability.

Different upgrades, either mechanical and/or cosmetic have been made to this bike to the ever-expanding demands of the market. The latest version 3.0 R15 was launched back in January 2017 in Indonesia and then in 2018 Auto Expo in India.

It has got an engine upgrade and also a newly shaped body for differentiating it from the other models which are thriving in the streets till date. You will easily be able to distinguish it as the version 3.0 from any given angle. The Monster edition, hence is even more distinctive and surely will make you stand out in the streets.

Features: To be honest about the YAMAHA R15 version 3.0, the whole bike is new with a revamped engineering from the ground up. This new version now comes with Variable Valve Actuation (VVA) technology. It also has got a slipper clutch now to help the rider do quick shifts in gear for better performance. Other features are described in a nutshell below.

The bike has now got Dual Channel ABS for better braking performance with ensured safety. There are new LED headlight and taillight set, a new instrument cluster, a more aggressive yet aerodynamic body and so more.

The only catch though in the Indian version is that as it is modified to suit the Indian subcontinent’s streets, there is no USD forks up front and so it gets a telescopic set, which are honestly, very playful for our general road conditions.

The YAMAHA-patented “Deltabox” frame is still present and upgraded to give the best possible performance.

The color options of this bike are all very attractive in the Indian and Indonesian edition. But the Monster Energy edition is only available in the trademark Black & Blue color.

The bike has new graphical presentation in its body that enhances the presence of the bike combined with the new panels and iconic graphics. The distinct LED taillight is also a charm to look at and helps instantly recognize a R15 Version 3.0 Monster Energy edition even in the night from a distance.

Body Dimensions: The all new YAMAHA YZF R15 Version 3.0 is a really good performing motorcycle. The wheelbase is 1325mm on which the 142kg bike stands. The bike is balanced amazingly with the “Deltabox” frame. The bike has a 11-liter fuel tank which feeds the engine through the Fuel Injection system.

The overall length of YAMAHA YZF R15 Version 3.0 is 1990mm while the width and height are 725mm and 1135mm respectively. The ground clearance stands at 170mm.

Suspension, Brakes, Wheels: The suspension system of this bike has a dual telescopic system up front with 130mm wheel travel and a link suspension Swingarm at the rear with 97mm of wheel travel. The front brake is a 282 mm Disc paired to the 5*2-spoke alloy wheel with 100/80-17M/C 52P MRF Nylogrip ZAPPER-FX1 tyre.

The rear brake is a 220mm Disc attached to the 5*2-spoke alloy wheel that is wrapped in 140/70-17M/C 66H MRF Nylogrip ZAPPER-S tyre. Both the wheels have tubeless tyre for better performance and to avoid sudden deflation along with Antilock Braking System (ABS).

Best For:  The YAMAHA YZF R15 Version 3.0 is targeted to the youth of the country yet it is also usable by the middle aged too. City riding is very much doable in this motorcycle.

College and university students and passionate young job holders are the main customers of this motorcycle. Some middle aged users also use this bike daily for their sheer passion of riding bikes.

The motorcycle is really very good at highway speeds and it easily allows the user to do inter-city commutes thanks to its powerful engine. So, you can do long rides with immense confidence.

Competitors:  The main competitors of YAMAHA YZF R15 Version 3.0 are the likes of:

The competitors are having a tough fight from YAMAHA YZF R15 Version 3.0 Monster Energy for their price as it ticks nearly all the boxes at a time questionable by the customers of this class. You can compare R15 v3’s price here with the competitors. 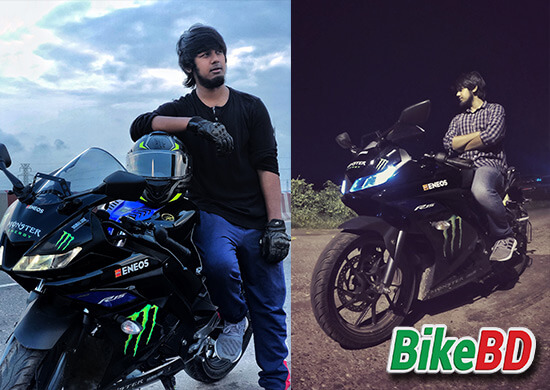 Ans. The company claimed mileage of the regular YAMAHA YZF R15 Version 3.0 is 48.75 kmpl and it delivers almost incredibly close to that figure as per many customers’ claims. The aid in this type of efficiency are the FI and VVA technology used in this bike.

Ans. YAMAHA YZF R15 Version 3.0 has a 6-speed manual transmission with wet sump multiplate clutch which is arranged in a reversible manner and equipped with a slipper clutch for easy shifts on demand. The pattern is: 1-N-2-3-4-5-6

Ans. Yes, for the rider mostly. The YAMAHA YZF R15 Version 3.0 is really good for highway rides. It has a dependable setup in terms of ergonomics and on top of all of these, it has a good, constant performance on the highways… So, it is very much doable to take this bike on long rides on the highways. There are many bikers who do long rides with this bike for a long time. But the catch is, for many riders, the seating posture is not that great considering the high saddle and the positioning of the ha