The number of adventure lovers in Bangladesh is increasing exponentially. Once motorcycles were only considered as commuting transport. However, the number of adventure bikes is increasing at a very slow rate. Presently there are only two adventure bikes available in Bangladesh. They are the Lifan KPT 150 and Aprilia Terra. Here we will discuss the Lifan KPT 150 ABS.

The Lifan KPT 150 ABS is the only adventure bike available in Bangladesh, which is why the stakes for this bike is extremely high. The bike lives up to its expectation. The bike comes stock with crash guards and a luggage rack. The crash guards are quite strong and very handy.

The Lifan KPT 150 ABS comes with exceptional lighting. The headlight has multiple LEDs that keep the road ahead of you illuminated quite well for highway rides. The rear has an LED taillight which is very much unique and attractive. The indicators are also LED and minimalistic.

The Lifan KPT 150 ABS comes in two different colors. They are:Blue.Black.Both bikes have the same decals. The decals are very simple and sporty. The decals make the bike much more attractive.

The Lifan KPT 150 ABS comes with liquid cooling, fuel injection, and ABS. The liquid cooling and fuel injection were there in the previous version as well, however, the newer version has ABS. These facilities are only found on premium racing bikes. These functions on an adventure bike are quite refreshing and interesting.

The Lifan KPT 150 ABS is a bit of a tall bike to sit on. Being an adventurer, the bike comes with a fairly good ground clearance to avoid all forms of terrain, which results in higher seat height. The height of the bike is 1300 mm. The bike comes with a standard wheelbase of 1330 mm, an excessive length of 2000 mm, and a surprisingly small width of 780 mm. The bike is easy to hold together with your legs due to being of the proper width.

The Lifan KPT 150 ABS comes with a new engine. But the power and torque figure are the same as before, as in, 16.8 bhp of power at 8000rpm and 14 Nm of torque at 6500rpm. But what it does come with it an NBF2 technology in the piston. Which means smoother power delivery to the wheels from the engine. The engine is electronically fuel-injected, which is very good for the fuel efficiency of the bike. The bike is expected to have a fuel economy of around 35-40kmpl.

The Lifan KPT 150 ABS comes with an advanced gearbox. This one still has a 6-speed shifter. But what is new is the sensation. The new shifter is much softer than the previous version. The motorcycle shifts much smoothly, softly, and linearly than before.

This particular section is the most exciting of all for the Lifan KPT 150 ABS. Lifan KPT 150 ABS is considered one of the most exciting motorcycles on the highway, and one of the reasons is the twin disc braking system with an Anti-lock braking system (ABS). The brakes seem to respond well when off-road as well, and that is because the motorcycles have a good balance in the brakes. The ABS increases the braking stability and performance of the brakes significantly.

The suspensions are the second most exciting thing about this motorcycle. The front USD telescopic forks have been tweaked to give the best performance they can give you off-road. Of course, they are not as good as a dirt motorcycle, but they are good enough for a weekend ride through the trails. The rear mono-shock also responds well during highway rides and even when there is baggage or a pillion. But the mono-shock will seem a bit stiff during the first 1000 km, so it is suggested to give it some time to break-in.

This particular motorcycle does not exactly follow the rules, hence finding competitors for it is quite tough. But this is Bike BD and we always find a way.Lifan KPT 150 (older version).Kawasaki KLX 150BF.Kawasaki KLX 150L.Aprilia Terra 150. 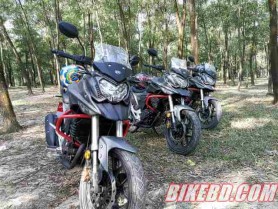 Ans- Lifan has slowly become one of the trusted motorcycle companies in Bangladesh and that is due to good bike quality and exceptional service.

Ans- The Lifan KPT 150 ABS is an adventurer motorcycle. It can also be called a sport touring motorcycle to an extent.

4. What are the best motorcycles of Lifan available in Bangladesh?

Ans- The Lifan KPR 150 and Lifan KPR 165 are considered the best motorcycles produced by Lifan so far.