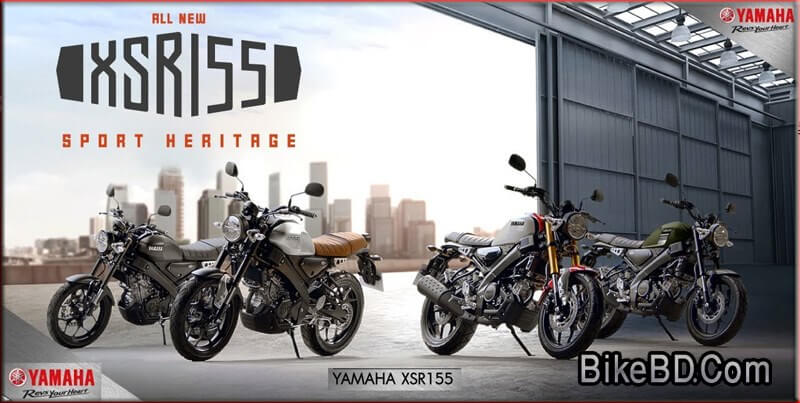 The Yamaha XSR is the dedicated motorcycle series from Yamaha that tagged the badge Sport Heritage. Yamaha describes the ‘Sport Heritage’ for a particular profile which alters the DNA Retro-Neo. Hence, XSR is the modern street scrambler series that profiled with mechanically advanced machines.

Further, the wearing and styling of the XSR shadowed from the past days. Thereby, the legacy carried through the exterior where all the modern technology covered underneath. Therefore, the breed is not only a modernist but also carrying the old day's memories. That’s the theme of Sport Heritage, therefore, XSR from Yamaha. 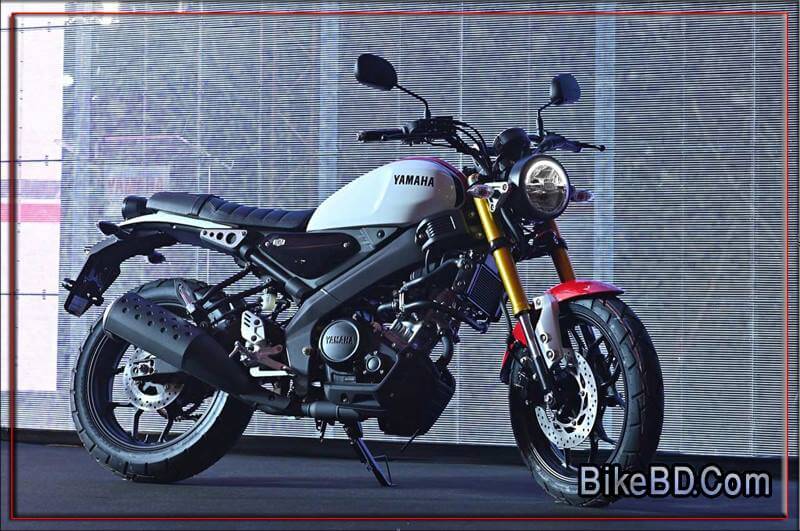 The XSR series revealed in 2015 in the occasion of Yamahas 60 years of racing heritage. Carrying the inheritance Yamaha marketed the XSR900 and XSR700 in 2016. The series altered the predecessor Yamaha XS-Series with all-new technology and technically advanced machines. Thereby, the modernized machine relayed Retro styling.

In the sequence of releasing entry-level clones of the giant sports machines, Yamaha Released the new XSR155. This August 2019 after tackling a huge rumor Yamaha released the youngest XSR from Thailand. The machine widely shadowed the XSR900 or XSR700 and technically quite a clone of latest MT15. Consequently, the new machine also tagged with Sport Heritage, therefore, covering the Retro-Neo Profile. 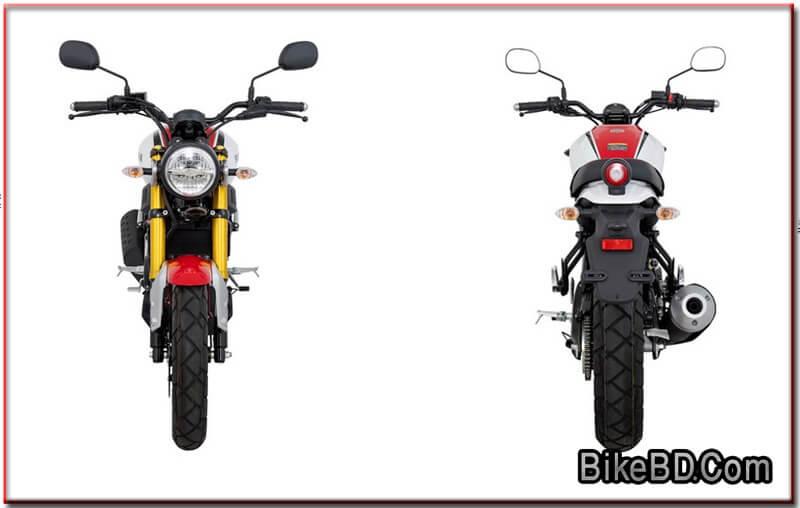 The Yamaha XSR155 carries the basic design and styling of XSR900 and XSR700. The motorcycle also carrying the modern mechanicals of Yamaha MT15 as does between Yamaha XSR and MT series. Hence, this youngest street scrambler youngerly copied the XSR design and styling.

The motorcycle carrying a very simple & solid design and styling as the scramblers do. This Retro-Neo carrying the old-school inspired ergonomics with a modernized touch. Here the headlamp, tail lamp, and ODO, all are the modern gadgets. Those include integrated DRL, LED lights, & fully digital setups. Further, those are compact and with rounded pit discounting further exterior enhancements. 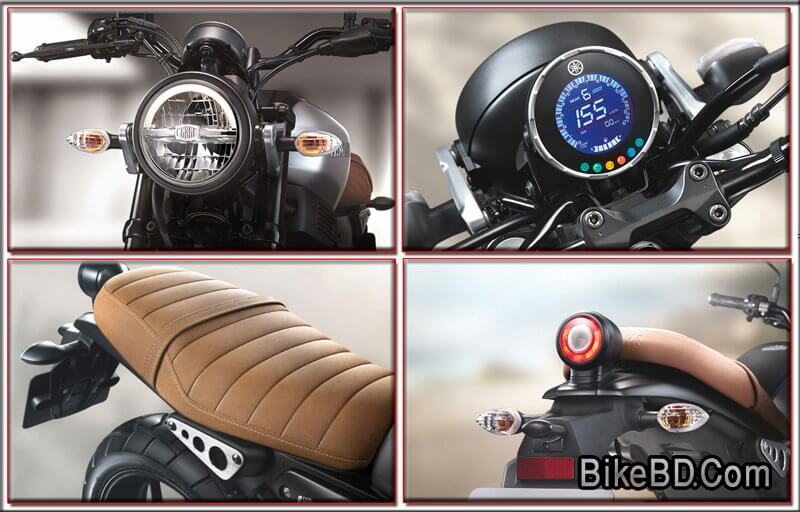 The delta-box frame is fully naked and the unnecessary body panel just ignored. The tail is fully naked obviously including small tail-lamp and registration plate hangers. The front-wheel got a low-profile mudguard. So, on the engine, it got a bikini under-bowl and the fatter exhaust profiled bold matching with the rests.

Here the teardrop fuel tank just has picked from the old school scramblers and that holds the ignition pit. The single-piece cushioned seat also reminds the old days. Thereby, the pipe handlebar and other controllers positioned comfy upright to ensure the real feel of the gentle breeze. Thus, the new XSR155 profiled in a blend of Retro and modernized Neo looks and styling. 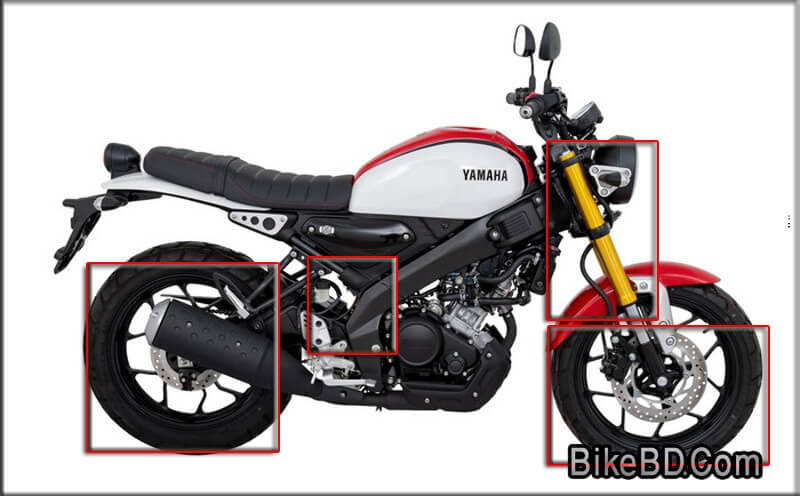 The Yamaha XSR155 grabbed the delta box aluminum frame. It’s the same frame that adopted in Yamaha MT15 and Yamaha R15-V3. But obviously few dimensions are different. So, on the aluminum swing-arm also hired from those models.

But the sub-frame is completely different, and all the parts kept naked matching with its Retro profile. Thereby, the XSR155 also got a higher ground clearance including lower saddle height and nimble 134kg of weight. 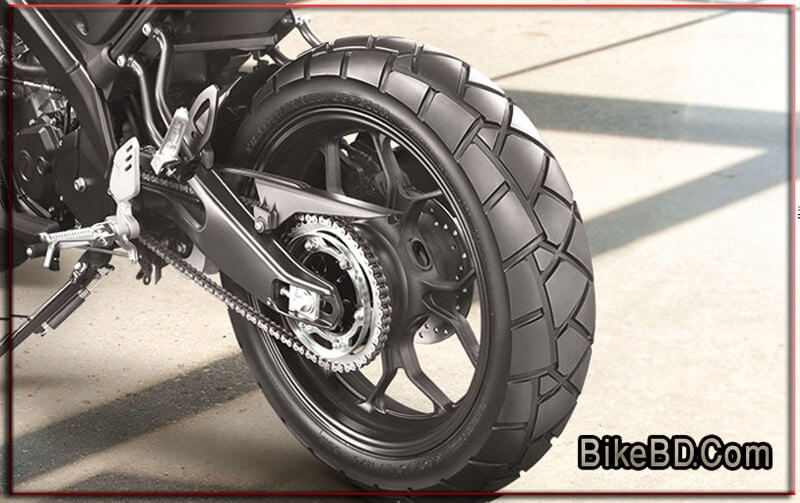 The wheel, brake, and suspension system of the XSR155 just picked from the Thai-spec MT15. The wheels are street profiled wheel. Those are with paired 10-spoke alloy rim and wider tubeless type tires. Matching with old-school feature the tires are dual-sport tires.

Further, in the braking system, all are same as in the MT15, and those are hydraulic disc type. Hence, till now its also remaining straight out of ABS feature as Thai MT15 and R15 are remaining.

In the suspension setup, its USD Telescopic fork in the front and rear are linked mono. The USD suspension barrels are featured with a color variation matching with the individual color scheme. Thereby, the golden and glossy-black coating is available in the different shade of XSR155. Therefore, XSR155 is fully packed with modern features in the wheel, brake, and suspension system. 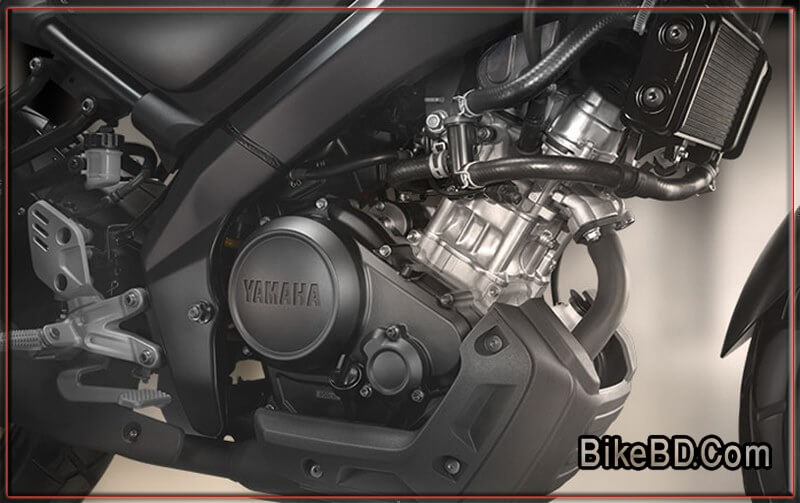 The new Yamaha Retro-Neo also copying the trend of the older siblings in mechanical and technologies. Thereby, the XSR155 also adopted the same engine that featured in latest MT15 as bigger XSR does from bigger MT’s.

Further, this fuel-injected machine copies all the technical feature and characteristics being the same profile engine. But Yamaha Motorcycle Thailand officially hasn’t revealed the power and torque figure in their official site.

Hence, being a street commuter its predictable that the engine tweaking and the performance figure may vary a little. It's due to the motorcycle type, category and performing ground.

Whatsoever, on another side, this engine is profiled to deliver the maximum 14.2kW of power and 14.7Nm of torque. Thereby, whatever the final-drive-ratio tuned for the XSR155 is expected to be very closer to the rated performance figures. That’s it. 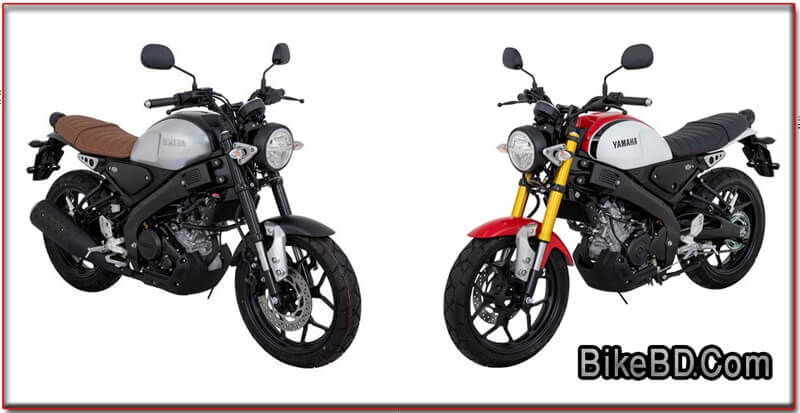 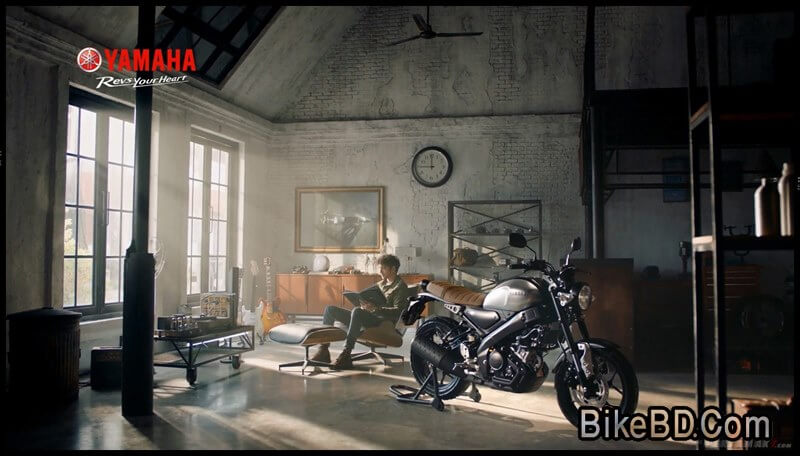 So, riders, that was the quite a glimpse of the features of new XSR155. Hope we could cover the details in our Yamaha XSR155 Feature Review. Thereby, from now the legacy of the Yamaha Sport Heritage starts again in the entry-level segment with the brand new XSR155. Cheers!

To see the details Yamaha Bike price in BD and Yamaha showroom near you visit our website. Stay with us for more update motorcycle news.