In the supersport motorcycle category, the Kawasaki and KTM got a gorgeous entry in the learner segment (Source). Therefore, both of the brands marketed their most entry-level or learner category supersport models.

Covering both of their 125cc category sports machines here we featuring a comparison review. Thereby, here is the Kawasaki Ninja 125 VS KTM RC125 Comparison Review. Hope you will enjoy the race.

These days most of the motorcycle brands are involving introducing the replicas of their supersport models in the learner segment. Hence, the 125cc category is the most entry-level segment that getting fertile with attractively featured sport bikes (Source). Thereby, the Kawasaki Ninja 125 and KTM RC125 is the latest entry in the 125cc sportbike market.

In the look and design, the Kawasaki Ninja 125 is the true copy of the bigger Ninja 250SL model. It carries quite the same features those adopted in that bigger motorcycle.

Hence, it carries the same exterior profile with single headlamp assembly including fully-faired aerodynamic body panel. Further, the fuel tank, sporty split-seat, exhaust, and compact back-end all are iconic and same as in the series.

On the counter, the KTM RC125 is the clone of RC200 that designed widely inspired by bigger RC390. In design and overall exterior profile, the RC125 carries all the same feature & style of RC200.

Further, the bat-eye styled dual projection light with wider aerodynamic body fairing is common in this model. Hence, in the rests, nothing is dissimilar despite the different color scheme. 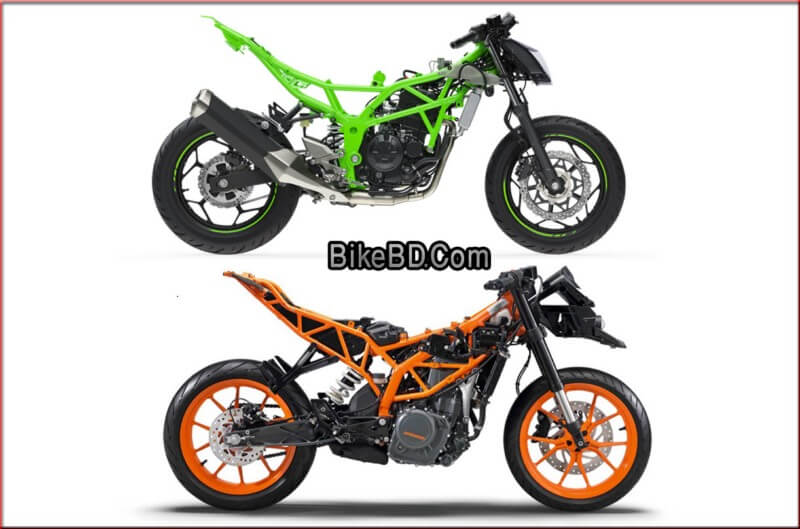 In the frame, wheel, brake, and suspension system both of the sports-machine featured quite the same as their elder’s. Here, both the machine carries the trellis steel frame just as featured in their elder sidings. But obviously, few dimensions are youngerly readjusted.

Here the Kawasaki Ninja 125 featured with paired 10-spoke alloy rim with tubeless type tires. The tires are 100/80-17 in front and 130/70-17 at the rear. On the counter, the KTM RC125 also fitted with different designed individual 10-spoke alloy rims. 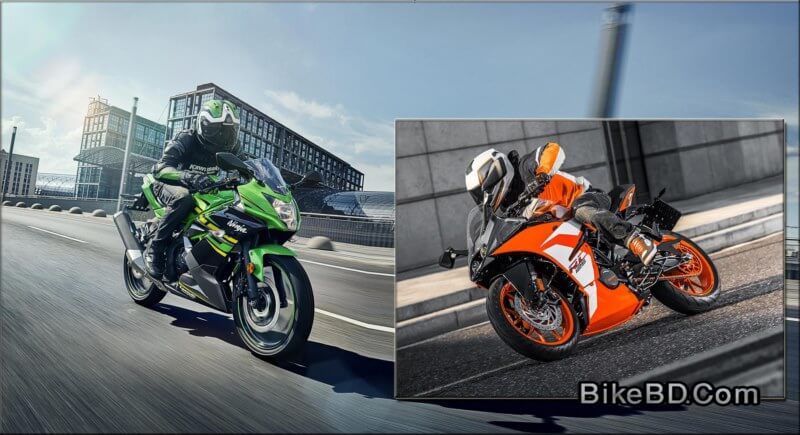 Further, in other feature Ninja 125 has an advancement with its ABS enhancement. The Ninja 125 comes with dual-channel ABS and RC125 featured with single-channel ABS system.

Coming to the suspension system the Ninja 125 carries the 37mm upright telescopic fork suspension at the front. In the rear its Uni-Track mono. Hence, the suspension travel is 110mm in front and 120mm at the rear.

Meanwhile, the KTM RC125 featured with 43mm USD fork suspension in front and mono at the rear. Here both the setup is from WP Suspensions and both of those comes with 150mm travel characteristics.

The Kawasaki Ninja 125 vs KTM RC125 both the machine is quite the miniature of their supersport motorcycles. Both the machine carries the compatible supersport DNA and featured with sport riding profile and ergonomics.

Here, both the machine riding profile is track-oriented sporty and aggressive. The handlebars are sporty-split after the raised windshield. The fuel tank top is raised up to the rider’s chest. Hence, the seat is sporty split with the compact and sporty-naked tail end.

Therefore, both the machine’s riding is track sport-styled. In Ninja 125, the posture is quite a bit relaxed but in RC125 it's much more aggressive than Ninja. Further, in controlling feature Ninja is much lighter than the KTM RC125.

Here in terms of braking and suspension feature both the machine poses different riding and controlling advancements. Meanwhile, the different feature of ABS plays a vital role in both bikes braking & controlling feature. Hence, obviously, in different weather and surface condition, Ninja & RC will act differently with their diversified features. 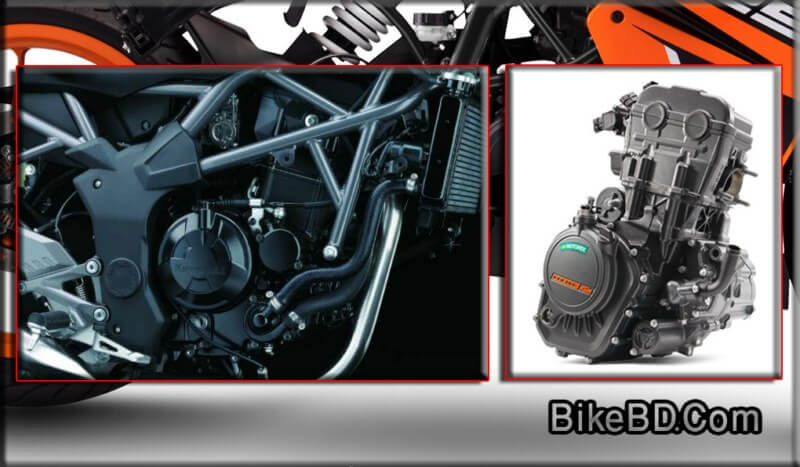 The Kawasaki Ninja vs KTM RC125 both the machine carries precisely the same displacement of engines. Both are the 125cc single-cylinder, four-stroke, liquid-cooled over-square engine with the same bore & stroke of 58.0mmX47.2mm.

Here, both the machine featured with DOHC 4-valve and electronic fuel injection system. Further, both are featured with the 6-speed transmission and starting is featured only with electric start. Thereby, a wider range of feature similarity found on both engines.

In the result-book, expectedly both the machine comes with quite the same figure of power and torque figure. Therefore, Ninja 125 delivers the maximum power of 11kW and torque of 11.7NM. On the counter the in RC125 it’s the same 11kw of power but the torque is 12NM.

So, readers, after the detailed discussion and specification table we hope you got the complete overview of the bikes. Obviously, both the Kawasaki Ninja vs KTM RC125 featured differently including a lot of similarities.

But most importantly, the power riders now have the wider option to choose according to their riding tastes. Thereby, our motorcycling environment also improving much day-by-day. 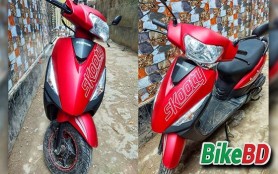